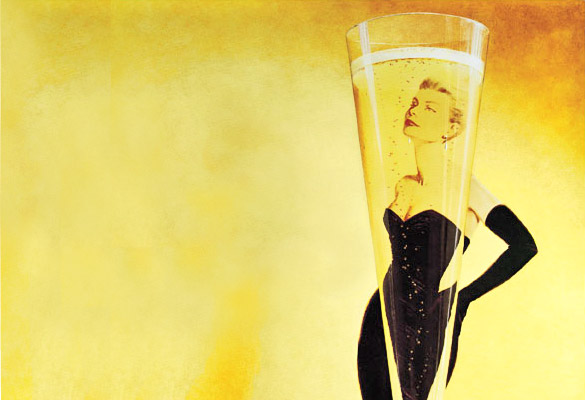 It’s perhaps the greatest of all paradoxes, French or otherwise, that wine produced in one of the bleakest, most punishing regions of that great Gallic country is drunk the world over to celebrate love. In an act of seeming rebellion, champagne endures harsh winters, alternating wet and frost-filled springs, and countless other insults to become a sensuous elixir capable of turning the most moribund and lovelorn soul into a jovial chap. Even its name seems to burst into a thousand bubbles when spoken. What better way to celebrate love, in all its maddening, hypnotic, peripatetic, and enduring forms, from first glance through decades-long endearment?

Before you rush out to christen a new love or toast this weekend, I implore you, don’t be hoodwinked by the expansive and expensive advertising that has saturated the market. Hundreds of little-known champagnes are equal to, if not better than, the mass-produced, mass-distributed champagnes lining so many wine-store shelves. Among them, you’ll find a few slightly different, perhaps even unusual, bottles that I find pair particularly well with the various shades of that crazy little thing called love.

Blush of romance
First, a champagne worthy of first romance. Legend has it that Valentine’s Day is a remembrance of the death of St. Valentine, a priest-cum-martyr who defied the Roman emperor Claudius II by marrying young couples in secret after it was decreed that single men made better soldiers. (Because of the emperor’s decree, countless men went off to war without the benefit of, well, send-off sex.) Perhaps nothing befits chaste love better than a bottle of unbelievable 1996 Krug Clos du Mesnil Blanc de Blanc ($1500). Krug has long been considered the Roi of Champagnes, the Titan. The Clos du Mesnil was the rarest of champagnes from this venerable house until recently, with the release a few years ago of the Krug Clos d’Ambonnay, which costs nearly $3,500 (yes, per bottle). But the Clos is still a classic, filled with the luscious flavors of pure Chardonnay fruit. (The blanc de blancs designation indicates that it’s made from 100% Chardonnay grapes rather than the typical blend of pinot noir, pinot meunier, and Chardonnay.) It promises an unmistakable, nutty taste  from its rich, yeasty bubbles.

Yet how many would-be lovers can pony up that much cash? If you lack the means, try the R. H Coutier Brut Tradition NV ($45). A beautiful blend of 75% dark, brooding pinot noir and 25% honeyed Chardonnay, this champagne will do quite, quite nicely. It’s made from grapes grown entirely on Grand Cru sites—with pinot noir from the famed village of Ambonnay—yet it costs a fraction of the Krug version. Coutier calls to mind ripe pear, baked apple, even butter-soaked layers of a proper French croissant, and evokes all the heat and shyness of yet-to-be consummated love. It’s perfect for passion that carries the risk of limited time yet also bears the potential to evolve into something far more rewarding and nuanced. It’s a secret that’s best kept between you and your hush-hush love.

Passion with potential
Young, brash love has inspired everything from heart-stopping prose (think Shakespeare) to atrocious lyrics (think Britney Spears). And it deserves something that says more than a bouquet of wilted red roses bought in haste late Valentine’s Day at the grocery store for twice the regular price. With a little sleuthing (but not a lot of money), you can probably find a bottle of Besserat de Bellafon ($53). It’s an aggressive little champagne that’s still playful in its exuberance—just the thing to wrestle with those powerful emotions. It relies on a blend of all three champagne-sactioned grapes, with a little pinot noir, a bit more Chardonnay, and a surprising 40% pinot meunier. Made by the same family that began la Maison Besserat in 1843, it’s an excellent example of why small champagne houses should command greater respect. Each pour is filled with intense overtones of honey and baked apples, the scent of dry flowers, and the unmistakable flavor of white peach. It casts quite a spell, so consider buying two bottles: one for Valentine’s Day, one to celebrate your first anniversary—or your 25th, as this champagne possesses all the requisite elements to age, like you, with grace.

Steady goes it
For love that’s found its rhythm but still surprises, treat yourselves to a “Big Boy”: a magnum of Bollinger Special Cuvée ($199.00). A truly special champagne house, Bollinger delivers superb wine without fanfare. It doesn’t really advertise and it doesn’t go for grabbing medals at trade shows, it just quietly produces awesome champagne. The Special Cuvée is made primarily from pinot noir and offers up those robust bubbles that break into notes of spicy buttered toast. This is for the couple that have seen it all, survived it all, and are quite content to invite a few friends over to celebrate it all.

Lasting tenderness
Undying love that has not only endured the test of time but compels you to hold hands in public after all these years deserves Bertrand Delespierre 2000 ($50). Unlike some wines that are officially designated “vintage,” champagne can be labeled that way any year the producer fancies. Most houses adhere to a strict taste test before declaring a vintage, and some, like Delespierre, only make vintage champagne in truly exceptional years, those in which it surpasses the senses. After an initial explosion of crisp fruit, the champagne evolves into classic comfort foods, with hints of toast, spices, yeast, and baked pears. Both delicious and evocative, it’s made rarely, made with passion, and made to be drunk by true lovers of champagne.

Champagne for one
And if you’re single, what then? Find a sexy little boîte, request a flute of whichever bottle pleases you, and hum a few bars of Harold Arlen’s “Down with Love.” You’ll soon find that on this holiest of high holy love days, no one can resist a self-satisfied, unencumbered cynic—especially one with excellent taste in champagne.

Cai Palmer spent much of his career in finance, whether on Wall Street or in London, pretending to be a wine connoisser. After retiring from that world, he opened an award-winning boutique wine store, Wine at Five, in Rye, New York, where he sells delightfully obscure wines. He also manages wine cellars for clients and commiserates with those still in finance by saluting them with a glass of wine—preferably Burgundy, save for Valentine's Day. He can be reached at wineatfive@verizon.net.