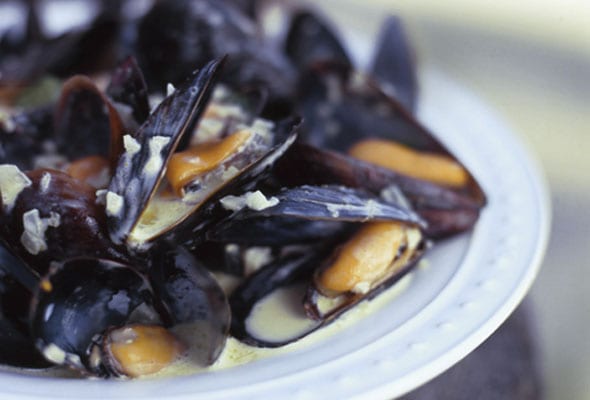 It’s not my custom to contemplate mussels. In fact, I don’t think about them at all, except when I see them on a menu, preferably steamed in a light white-wine broth. So on a recent trip to Nova Scotia, I was surprised to find myself so seduced and intrigued by these ancient bivalves as I followed them from a National Geographic-perfect inlet to my empty plate, in fewer than eight hours.

It began when The One and I boarded the “barge with no name,” the crown jewel of the one-vessel Indian Point Marine Farms fleet, co-owned by Peter Darnell. “We tried to name her,” Darnell said offhandedly, “but it didn’t take.” Wasn’t it tempting fate to ride in an unchristened boat, I wondered. To be on the safe side, I silently baptized her Nova Lox, a tribute to my morning breakfast.

We chugged through the coves that ring Mahone Bay, stopping every so often for the crew to hoist up lines that were so covered with clumps of mussels that they looked like giant, slick telephone cables. I learned from Capt. Mike Watson that the common Mytilus edulis is shamefully indulged at Darnell’s farms, where everything is handed to them on a platter before they end up on one. First, the mussels are set up in naturally protected, unpolluted coves and inlets. Over the next two years, they’re cleaned, preened, and pampered until they’re mature enough to harvest. Watson regularly lifts the long cables of mussels, checking for any predators, making sure they’re growing evenly, and dragging the massive lines of bivalves to a new spot for a change of underwater scenery. And extracurricular activities? Well, let’s just say that during his off-hours, Darnell traffics in the world’s oldest profession: Several times a year, he oversees the mating of hundreds of thousands of mussels during a wild two weeks of marine debauchery.

There was only one way to tell whether living this large was paying off—for me, natch. That night, The One and I headed to the nearby town of Lunenburg to try its newest and most-talked-about restaurant, Fleur de Sel. Chef Martin Ruiz Salvador and his wife, Sylvie, the restaurant’s hostess, greeted us warmly. Then we got down to business. The Indian Point mussels I was about to eat had beaten me to the restaurant by only about two hours. When they arrived at my table, they were tender, yet their sweetness stood up to Ruiz Salvador’s use of the powerhouse flavors of garlic, basil, and oregano.

As I sopped up the broth with a bit of bread, I realized that I’d been seriously underestimating these lovely creatures by using pedestrian white-wine broth. If garlic and basil can’t keep a good mussel down, I couldn’t wait to try saffron, chinese five spice, curry. I decided right there, in front of my and The One’s overflowing bowl of shells, that if Darnell can mollycoddle his mussels all their lives, the least I can do is spoil mine with exotic spices during their last 20 minutes. But I drew the line at matchmaking; I didn’t want to scare the cats.

LC Note: If you’re reading this during a month without an “r”—to whit, May, June, July, or August—you can pretty much forget The R Rule, that little saying about the months when you’re not supposed to eat mussels. At least, if you’re eating farmed mussels. Modern mussel farms, such as Indian Point Marine Farms, carefully monitor the water level for algae bloom, a toxin that proliferates during warmer months and which is responsible for that little ditty that has disappointed many a mussel aficionado in summer. So if you’re hankering for farmed mussels, go right ahead. Indulge. Anytime. Now, wild mussels, that’s another story. For those, stick to The R Rule.