These cinnamon toast bars, made with flour, brown sugar, cinnamon, eggs, and vanilla, tastes like, well, cinnamon toast. But oh-so-much better. Your kids will worship you. So will your inner kid.

All the loveliness of cinnamon toast but in a vastly more indulgent package. Another beauty of this recipe, as the author explains, is that “you probably already have all of the ingredients on hand, making it perfect for that ‘OMG! I’ve got to make something for the bake sale!’ moment.” And we could all use more of that.–Renee Schettler Rossi 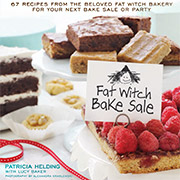 Preheat the oven to 350°F (175°C). Line a 9-inch square metal baking pan with parchment paper, allowing the excess to hang over the edges of the pan. (Do not use a glass baking pan for this recipe.)

In a large bowl with an electric mixer, beat the butter, light brown sugar, and granulated sugar until well combined. Then beat in the eggs and vanilla until light and fluffy.

Measure the flour, baking powder, salt, and cinnamon and sift directly into the butter mixture. Beat just until combined and no trace of the dry ingredients remains.

Spread the batter evenly in the prepared pan and bake for 28 to 35 minutes, until the top is golden and a toothpick inserted in the center comes out clean or with only crumbs, not batter, on it. Cool in the pan on a wire rack for at least 1 hour prior to even thinking about cutting into them. (Seriously. The bars are already a little tricky to slice in a presentable manner since they’re gooey, and if you wait any less than an hour, you may as well instead just grab a spoon and start scooping brownies from the pan.)

Cut the blondies into squares just before serving. (The bars will keep longer uncut. Cover the pan with plastic wrap or foil and store at room temperature for 3 to 4 days or in the refrigerator for 6 to 8 days.)

This tastes like a blondie and a snickerdoodle made a baby in the oven! This treat is AMAZING! It has the best qualities of two of my favorite desserts—the chewy butteriness of a blondie and the cinnamon crunch of a snickerdoodle cookie. My finished product looked just like the picture. The top was cracked and uneven, very crisp at the edges, and sunken in the middle. The appearance proved not to matter in the end, the texture was amazing! The top and bottom were delightfully crunchy, a perfect counterpoint to the gooey and chewy inside texture that was just like a blondie.

These cinnamon toast bars are a cross between breakfast and dessert. Their texture is very similar to a fudgy brownie but the flavor is very cinnamon breakfast cereal. I enjoyed the dense texture and may cook them a little longer next time. My baking time was significantly more than the 22 to 28 minutes that the recipe indicated. I took them out after 33 minutes and a toothpick still came out with moist crumbs attached. I think they could have stayed in even a few more minutes but were delicious as is and very moist and chewy.

They were very dense and cinnamon-y in flavor. I enjoyed them with coffee and would cut off a piece at will rather than slicing them all ahead. I made them four days ago and I'm still enjoying one as I type this review. I started checking the bars at 22 minutes and they were still mostly batter with some crisping around the edges at that point. At 28 minutes, the toothpick still came out with batter on it but the edges were puffing up nicely. At 33 minutes, a toothpick came out with very moist crumbs but I was concerned about leaving them in any longer because of the timing in the recipe. I definitely could have given them a few more minutes in hindsight.

Cinnamon toast bars. Even their name oozes comfort. Unlike the author, who describes these as reminiscent of cinnamon toast, to me these were like a blondie but with cinnamon. And this is cinnamon at its finest, and in just the right proportion, with no other flavors to detract or vie for attention. I used Korintje cinnamon, which Penzey’s describes as the cinnamon we remember from childhood.

Baking time was 27 minutes, and we later decided they could have gone a bit longer. The top surface was a bit crackly like a brownie/blondie and the look of it deceived us into thinking they were more done than they were when we pulled them from the oven. After the specified one hour cooling time, it was time to cut into bars? Squares? Despite being called bars, the author cuts them into squares. However, we settled on eighths as the proper size, a rectangular bar, rather than a square. They were gooey at the one hour mark, but solidified as time passed. Those eaten even a couple of hours later were a better texture than the first ones. As for storage, there were none left to store, emphasizing just how yummy and comforting these are, the cinnamon just quietly delicious and equally great from aroma through to aftertaste. Note that we felt the quality of the cinnamon was key and we were happy to have used a cinnamon with a flavor profile to match the comfort factor.

Additionally, while the end product resembled the photo, the photo depicts a different size and type of pan than the 9-inch-square baking pan the recipe calls for. Lastly, a great big plus for these is indeed that it is all standard pantry items for most any type of cook, and, between that, the ease of preparation, and the terrific result, this is a dessert worth holding onto for either a plan-ahead or a last minute treat.

Panic bars. That’s what these are. They take no time to put together (maybe 10 minutes?) and are made in 1 bowl. These bars can suit nearly every occasion—or emergency. Serve with ice cream for dessert or with coffee for an afternoon pick me up. I may have hovered over the pan late one night after a rough day.

The worst part is waiting an hour for them to cool because they really do smell like cinnamon bread. I was expecting a crisp, cookie-like bar, but instead these Cinnamon Toast Bars are chewy and almost like a fudgy brownie. The cinnamon and brown sugar are the stars, but the flavor of these bars is perfectly balanced. Don’t skimp on the cinnamon or the vanilla and use the best stuff you can. It’s worth it. I kept these bars cut into squares tightly covered in the fridge where they were perfect for 5 days. Honestly, though, I’m surprised they lasted that long.

If you are looking for a recipe that results in a brownie texture, but has a completely different flavor, this is a keeper. It takes almost no time at all to blend the ingredients—about 10 minutes total. My bars were fully baked in 28 minutes. The top of the baked bars has the same texture as fudgy brownies when removed from the oven—that surface that cracks just slightly when cut. The center of these bars also has the texture of fudgy brownies. The finished bars had just the right amount of cinnamon flavor. They were a big hit with everyone, including those who are not as fond of cinnamon.

All the ingredients are common enough to be found in most kitchens. It's a simple recipe, but the result is a special treat. From beginning to oven is a mere 10 minutes. The batter is thick and spreading it evenly a gooey challenge. I found an offset spatula worked for spreading batter evenly. Bake until done, we baked for 28 minutes, but probably could have gone a little longer, even though the toothpick was clean when pulled out. Waited to cut into and I believe this is a must, as they need to set up. They fell a little when cooling. These are similar to a brownie and we cut about 24 bars. I wished we had vanilla ice cream to serve with them warmed up.

Those of us who like to bake from scratch need recipes like this in our arsenal for those last-minute demands or sudden cravings. The fact that you are virtually guaranteed to have all of the ingredients in your pantry at any given moment seals the deal! These bars are delicious and easy to throw together. I used an 8-inch baking pan because I didn't have a 9-inch pan. As expected, mine took longer to bake because of the smaller pan. The bars took 36 minutes to bake. The texture of the bars was just like the picture indicated—a crisp thin layer on top of a very dense, chewy interior. Delicious!

These bars taste just like the recipe name and reminded us of Cinnamon Toast Crunch cereal. The recipe was a snap to put together with staples in the pantry. The only complaint was that it might be a little too sweet, which is easily resolved with less sugar—maybe 1/2 cup less. The bars would be perfect as a snack with milk or coffee as well as dessert.

Back to Cinnamon Toast Bars on Leite's Culinaria