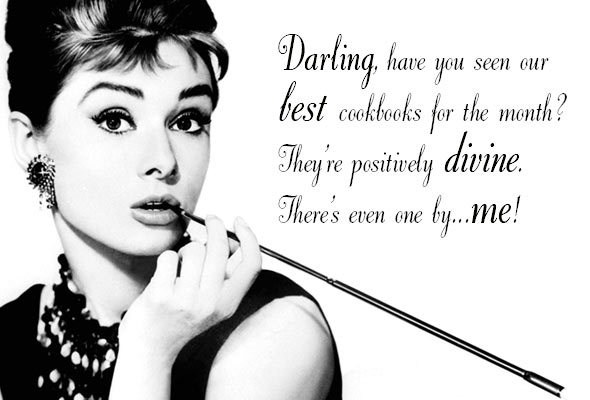 I know you want to skip straight to the part about Audrey and how this relates to the best cookbooks we’re been reading and cooking from lately, so I won’t waste your time. Without further ado, behold! The cookbooks we’ve fallen in love with as of late, including titles by a MIT grad, a Southern belle, and yes, that movie star darling of millions.—Renee Schettler Rossi 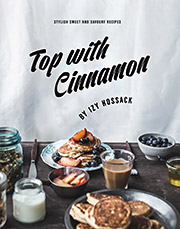 f you’re not familiar with food blogger Izy Hossack, you might assume, based on the title of her cookbook Top with Cinnamon: Stylish Sweet and Savory Recipes, that she’s all about the comforting spice whose aroma lures you to the Cinnabon kiosk at the airport. But you’d be wrong. The title is nothing more than a nod to Hossack’s crush on cinnamon when she started her blog at the tender age of 15. (More evidence that the millennials-are-lazy stereotype simply isn’t true.) Yes, her book includes killer recipes for pretzel cinnamon rolls and cinnamon pecan oatmeal cookies, but Hossack knows her way around the entire kitchen, not just the spice cabinet. I was most wowed by her savory dishes, including her simple Shredded Beef Chili With Sweet Potatoes and her pork ragù with eggplant and pappardelle, which has transformed my weeknight bolognese game. Trust me when I say you don’t have to love cinnamon to love this cookbook.—Frances Kim, Associate Editor 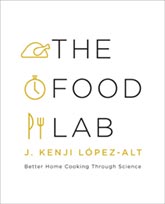 J. Kenji López-Alt has a degree from MIT, nearly a dozen years of restaurant experience, lineage that boasts a nutty professor, a gig as culinary science guy for Serious Eats, the self-proclaimed label “a nerd in the kitchen,” and the ability to take complex and unerringly precise chemical processes and make them seem unintimidatingly simple. His latest work, The Food Lab: Better Home Cooking Through Science, is part cookbook, part textbook, and part manifesto, and it’ll launch your kitchen prowess to even more spectacular heights. López-Alt isn’t pedantic or particularly long-winded. He just quietly, knowingly, convincingly explains how to make perfect scrambled eggs and why your made-from-scratch mayo broke and a litany of other common everyday kitchen conundrums. At $49.95, it’s not a cheap read. But the alternative is to spend literally years of your life Googling these sorts of food questions for free and still not find answers as coherent, concise, and home-cook friendly as these. And that’s to say nothing of all the solutions this book contains to questions you haven’t yet thought to ask.—Renee Schettler Rossi, Editor in Chief 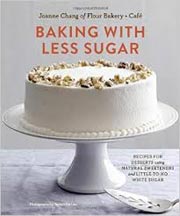 Comedian Louis C.K. has a great routine about how he wishes he could be the kind of person who has one doughnut and then walks away. I feel that way about pretty much all baked goods. Moderation is tricky. Luckily, Baking with Less Sugar: Recipes for Desserts Using Natural Sweeteners and Little-to-No White Sugar, the most recent cookbook by Joanne Chang of Flour Bakery fame in Boston, does some of the moderating for you. These recipes cut down on or eliminate white sugar altogether, yet they somehow manage not to take all the indulgence out of dessert. The first chapter is devoted to Flour Bakery classics made with modest amounts of white sugar, including a yellow birthday cake with chocolate ganache frosting. The chapters that follow showcase recipes that rely only on natural sweeteners, whether honey, maple syrup, molasses, or, as with her pear turnovers, dried fruit. The only drawback to this sort of baking is that the desserts don’t have as long a shelf life as their sugar-loaded counterparts. But I doubt leftovers will be an issue.—Frances Kim, Associate Editor 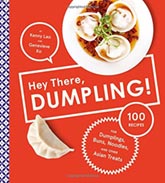 Making Chinese dumplings has long been an elusive accomplishment for me. Let’s just say multiple failed attempts forced me to retire my bamboo steamer and call for take-out when I need my dim sum fix. In spite of this, I couldn’t resist buying Hey There, Dumpling!: 100 Recipes for Dumplings, Buns, Noodles, and Other Asian Treats by Kenny Lao and Genevieve Ko. The book’s bold photos and whimsically informative illustrations make it feel like the authors are right there cheering you on, pushing you towards dumpling greatness. The book had me sealing and shaping pork and chive dumplings with ease thanks to the troubleshooting guide. (Public service announcement: Use less filling and a nonstick skillet.) I love the mix-and-match matrix that indicates which dumplings go well with which dipping sauces. And the barbecued pork dumplings that Lao describes as “savory, meaty tarte Tatins” would wow anyone who sits down to them. While I’m not quite ready to throw away my take-out menu, I feel pretty good about crossing dumplings off my culinary bucket list.—Tracey Gertler, Marketing Manager 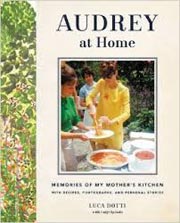 In Audrey at Home: Memories of My Mother’s Kitchen, Audrey Hepburn’s youngest son, Luca Dotti, shines a very different spotlight on the movie star whom so many of us adore, admire, and, yes, secretly aspire to be. Through a collection of photographs, memories, and recipes, Dotti shares his impression of Hepburn as a mother, friend, and woman. He is cautious in his storytelling, never revealing too much, and instead uses the food she loved to make for her family as a window into the woman he knew. “The notes in the margins of her favorite recipes matter as much as those in her scripts,” writes Dotti. This isn’t a book filled with inaccessible gourmet dishes, but rather recipes for breaded cutlets, flourless chocolate cake, and penne with ketchup (a favorite junk food of sorts for mother and son). Though the actress may have worn Givenchy on the red carpet, she also packed pasta in her suitcase and had an obsession with chocolate. Through food, Hepburn is portrayed as a sweet-natured woman who enjoyed the simpler things in life, which just makes you love her even more.—Kate H. Knapp, Editorial Intern 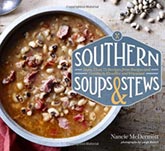 Nancie McDermott travels a winding road from Washington, D.C., to the furthest coast of Florida in Southern Soups & Stews: More Than 75 Recipes from Burgoo and Gumbo to Etouffée and Fricassee. A native Southerner, McDermott takes us on an enviable culinary road trip through the local flavors that define the food culture of the South via a compilation of heirloom soup and stew recipes from chefs as well as home cooks that have burbled happily away in all manner of vessels, including three-legged pipkins and enameled Dutch ovens. Without so much as leaving your kitchen, you can taste the foods of Charleston in William Dea’s she-crab soup or shrimp and grits with tomatoes and bacon. Travel to New Orleans for French Quarter oyster stew or Cajun-style chicken and sausage gumbo. Head back North to taste Virginia Brock’s Georgia-style Brunswick stew, Blue Ridge Mountain wild mushroom bisque, or Raymond Andrew’s saltine cracker stew. Finish your journey in Miami with a big pot of ropa vieja, which is rather appropriately translated to “old clothes. After all, it’s been a long trip.—Beth Price, Director of Recipe Testing 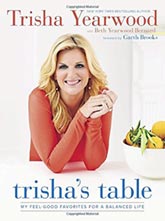 For many of us, life is about the perpetual juggling act of family and work, husband and children, healthy eating and the occasional indulgence. Grammy award-winning country music singer, wife, mother, and cookbook author Trisha Yearwood seems to have found an equilibrium—at least in terms of healthful and splurge-tacular eating—and divulges how we all can achieve this in her latest title, Trisha’s Table: My Feel-Good Favorites for a Balanced Life. Working on an 80/20 premise, Yearwood’s recipes are 80% healthful options, such as Brussels sprouts with pistachios, and 20% recipes designed strictly with pleasure in mind, including brownie batter cookies and a skillet apple pie that takes just minutes to make from pantry staples. (I had to send the pie to work with my husband or I would have eaten the entire thing in one sitting. Let his co-workers find their own balance.)—Beth Price, Director of Recipe Testing