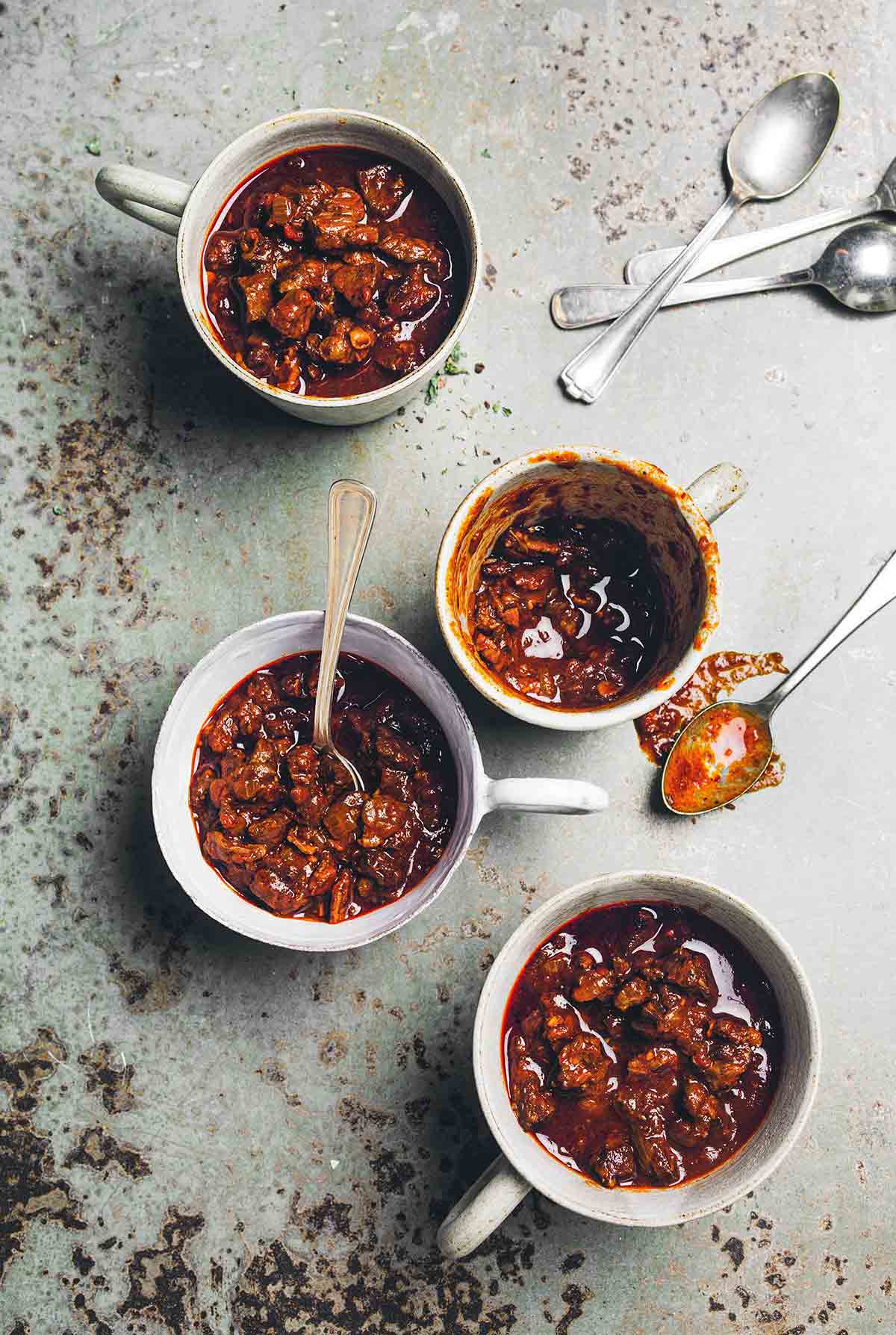 This is the way we make chili con carne at El Real Tex-Mex Cafe in Texas. Be sure and use the homemade chili powder for a full-flavored chili. Don’t skip the step of dry toasting the cumin seeds—it really improves the flavor. Serve the chili con carne in a bowl with chopped onions and shredded cheese, with saltines, over tamales, rice or potatoes, in a Frito Pie, or combined with beans.–Robb Walsh

Toast the cumin seeds in a large skillet over medium-high heat until fragrant, about 1 to 2 minutes. Transfer to your work surface and, using the bottom of another skillet or a metal or wooden tool with a flat surface, coarsely crush the cumin seeds.
Cook the bacon in a large pot over medium-high heat until crisp. Remove the bacon and reserve. With the pot still over medium-high heat, cook the beef in the bacon drippings until browned on all sides. It may be necessary to brown the beef in batches. Transfer the meat to the plate with the bacon.
Reduce the heat to medium, add the onions, and sauté in the remaining drippings until lightly browned, 8 to 10 minutes.
Add the crushed and toasted cumin seeds, chili powder, paprika, oregano, black pepper, thyme, salt, and garlic to the onions and cook, stirring, for 1 minute. Crumble the bacon and add it to the pot along with the beef, beef broth, 1 cup water, the tomatoes, and the ancho chiles.
If making the chili on the stovetop, bring to a boil, reduce the heat, cover partially, and simmer until the meat is very tender, about 2 hours, adding water as needed to maintain the desired consistency.

If making the chili in a slow cooker, transfer the contents of the skillet to a slow cooker set on low and cook for at least 6 hours and up to 8 hours, until the meat is very tender.
When the meat is tender, use tongs or a fork to find and remove the anchos. Purée them in a blender, return them to the pot, and stir well.
Ladle the chili con carne into bowls and dive in. Originally published October 17, 2015.
Print Recipe

This chili was amazing. Absolutely simple—you just need some patience. This recipe is the bomb. I will make it again.

I made the chili powder at home, and it was really simple. The recipe took all of 10 minutes. The chili itself was very straightforward. I bought chuck steaks, trimmed them and cut them into 1/4-inch-cubes (and I used the trimming to cook the beans with—nothing went to waste). I cooked the chili on the stovetop in a cast-iron pot for about 2 1/2 hours, mostly covered, stirring once in a while. Hands-on time, including making the chili powder, was about 25 minutes, total time was close to 3 hours, mostly unattended.

Gorgeous flavor and color. We had it once plain with just some cheese, sour cream, scallions, and tortillas, and then the leftovers we had Cincinnati 5-way style with beans over spaghetti squash. Outstanding!

I gotta say, this is one helluva good chili. It's by far better than using ground beef. It's chili the way it was meant to be (chunky). It does require a time commitment but it's well worth it.

Since I was unable to obtIain ancho chiles, I substituted New Mexican chiles. The rest of the recipe was followed as written. It's a bit time-consuming with the prep but it's worth it. I served it with some grated Cheddar on top. I added some red kidney beans and cooked elbow macaroni to some leftovers. They were both great.

On the heat side, this should appeal to everyone. If you like more heat, just add a dash of cayenne. This is a great weekend meal that can be made ahead for a weeknight dinner. Be sure to make the chili powder because it does make a difference. My Texas transplant friends approved.

I made the homemade chili powder as directed. I went to 3 stores to find dried ancho chiles that were not brittle and dry. I found very good, soft, dried chiles with a nice dark red color to them. I used 2 ounces chiles. The recipe is supposed to yield 1/4 cup chile powder but I got 3/8 of a cup. I now have 1/8 cup homemade chile powder to use in another recipe.

Next was the task of prepping all of the ingredients. It is not for the faint of heart. I actually toyed with grinding the meat with the coarse disk of my grinder. I kept holding up my index finger and thumb to what a 1/4 inch cube would be. That just seemed insane to me, however, I gave it a go, and I'm very happy that I did. It made all the difference in the world. Ground meat would not do this chili justice.

I did not cook this chili on top of the stove. I find that it's too difficult to regulate the temperature of the burners on my stove. Instead, I brought the pot of chili to a boil, and then down to a simmer. I placed it in a 350°F oven and checked it every 30 minutes for 2 hours. It stayed at a constant simmer. I left the lid askew, and the chili got significantly thicker, which was what I wanted. After the chili was done and I had pureed the anchos. I added just a little water to the blender to get all of the ancho puree out of the blender and thin down the chili just a bit.

This is delicious on its own. It's very nice to have bowls of cubed avocado, shredded cheese, and sour cream to dollop on it also. We are usually wine people, but this chili calls out for cold beer. We listened.

Sorry, Mom. Midwestern chili has its place, but the similarity stops at the name, the bowl, and the spoon. This is not the chili of my childhood—tender bites of roast beef replace mealy ground chuck; smoky bacon and not canned beans; a brick-red sauce dark with chile and not tomato paste. About an hour of chopping and prep work is easily accomplished before plugging in the slow cooker and setting off on the day's adventures. I smugly pulled the crock right up and dumped the sautéed bacon, beef, onions, etc. in as we went, saving myself an extra dish to wash.

One little cheat: I subbed 1/4 cup powdered ancho chile in lieu of the homemade chili powder: I just didn't have the gumption for toasting and grinding my own chiles.

I have a 5-quart slow cooker and after 6 hours on low, the aromatic chili had us clamoring for the simplest toppings—chopped scallions, cheese, and yes, did someone say Fritos? So good!

This chili con carne is not the chili of your childhood. This is a sophisticated uptown chili that cannot be beat. Hands-on time was probably a little longer than 2 hours, just because (for the first time in my life) I made my very own homemade chili powder. Wow!

The onions I used totaled 4 cups, which I thought was going to be way too much, but they added to the richness of the chili and, in the end, you couldn't even see (or really taste) 4 cups. Perfect amount.

I was a little worried that 3 pounds beef chuck was going to be too much meat, but after the meat cooked down and was melt-in-your-mouth tender, you had the perfect ratio of beef and sauce in every bite. I simmered the chili on low for about 3 hours, and the meat was super tender, and the sauce was the right thickness. I'd never tried adding bacon to a chili, and in the end, you couldn't even taste it, although I'm sure it added the smokiness that you could definitely taste. I added a can of cannellini beans at the very end.

I served this in a sourdough bread bowl (thanks to my local bakery) and this was a huge hit with the husband. A sprinkling of onions and Cheddar cheese topped this meal off perfectly.

While this chili is a bit of work, the results are worth every minute. The chili has an amazingly rich sauce and was a favorite with everyone. Who knew making your own chili powder with ancho chilies would make such a difference in the flavor of chili?

I wanted to cook this chili in my large (5 1/2 quart) Crock Pot, so I began the night before I planned to serve it. I did all the chopping of onions and garlic, all the measuring of spices, the cooking of the bacon, the browning of the beef, and the sautéing of the onions, garlic, and spices. I mixed all of this together and put it in a bowl in the refrigerator overnight. This was a good idea because it took me 45 minutes to do it all. I cannot imagine doing all that in the morning before work. The following morning, I emptied the bowl into the slow cooker and added the beef broth, water, canned tomatoes, and the 2 chilies. Eight hours later, we had an amazing chili dinner.

We topped our chili with scallions, red onion, corn chips, and cheese. It took two batches to brown all the meat. The first batch caramelized nicely, but by the time I began the second batch, the meat had released so much liquid the second batch did not get caramelized (the meat was braised rather than sautéed at that point) but did brown. It made no difference to finished look or flavor of the chili.

Back to Chili con Carne on Leite's Culinaria