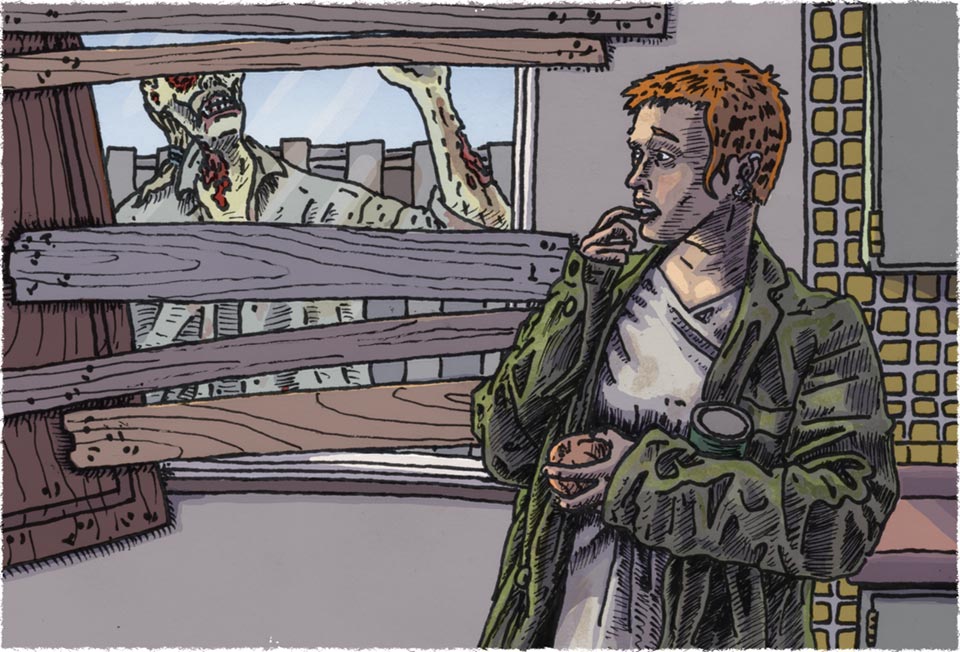 The Art of Eating Through the Zombie Apocalypse | Smart Pop, 2014

Ok, funny story. You might not know this, but your favorite Fatty Daddy’s first and only big-screen role was as a zombie in George Romero’s Day of the Dead. I was one of the walking, shuffling masses in an underground silo scene. I was the last zombie in the last row for what felt like miles from the camera. I didn’t go to Carnegie Mellon University’s acting program to be an extra in the dark, dammit. So as we were waiting for the setup of the shot, I threaded my way slowly through the crowd until I was in the second or third row, cowering a bit because I didn’t have the good zombie makeup on. Just a few smudges of some dark stuff. I was unaware that the girl zombie in front of me was going to be shot in the head. As the cameras rolled, the special effects capsule exploded and splattered me with blood, and I, well, screamed. After all, I was startled. But, alas, there’s no such thing as startled, screaming zombies. I was escorted off the set, and I guess they had to reshoot the scene. All this to say, I would never survive a real zombie apocalypse. [Editor’s Note: True, David probably would not last long in an actual zombie apocalypse. But you actually could stand a chance at faring quite well thanks to the surprisingly practical advice outlined in the book The Art of Eating Through the Zombie Apocalypse, from which the below is excerpted. Hikers, campers, and wannabe preppers, take note.]—David Leite

Zombies, ghouls, biters, walkers, geeks, lamebrains, skels, rotters, zekes, or, as our Canadian friends like to call them, zeds. Their unrelenting shamble into pop culture ubiquity, from television to video games to fan conventions to literature, may have lulled you into a false sense of security, but don’t be fooled! While it may be all fun and brrraaaaaiiiinnnns for the general public, when the zombie apocalypse hits, our very way of life will come to an end. Aside from the complete annihilation of societal conventions as we know them, we are talking about the end of chorizo, chocolate bars, and tacos here. Once civilization collapses, you will probably never eat another glazed donut. Or a really good piece of French cheese, or even a banana, for that matter. 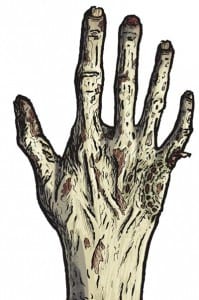 There will be no more late-night Ben & Jerry’s and a bag of Spicy Doritos, or fanciful meals fully embracing the locavore movement with sautéed ramps nestled atop your hormone- and antibiotic-free roast chicken breast. There will be no more GrubHub pizza delivery and no more freshly baked cookies coming out of the oven. There will be no more pickling in your tiny Brooklyn apartment or watching Adult Swim while stuffing your face with a box of Wheat Thins because that’s all you found in the pantry.

Face it, life as you know it will cease to be. And no matter what kind of eater you are—whether a “foodie” who tweets from the hottest restaurant openings, a pimply-faced video game addict subsisting on Yoo-hoo and Slim Jims in your parents’ basement, or even a Regular Joe who doesn’t think much about what you eat because to you, it’s just food—the fact is we’ll all still have to eat.

To be sure, your main objective in surviving the zombie apocalypse will be to not become a zombie. The initial outbreak will be characterized by chaos and pandemonium: it will be an all-out smorgasbord for the walking dead and an all-out shit show for the rest of us. Most of the living will be utterly gripped by panic and terror, running around trying to beg, borrow, or steal bottled water, batteries, and canned foods while outrunning the undead. The bulk of one’s attention, energy, and day-to-day activity will be consumed by a struggle for survival—that is, staying one step ahead of the undead hordes roaming the wasteland (a term we use affectionately for the decaying remains of human civilization) while meeting basic requirements for water, nourishment, and shelter. That alone will be monstrously hard. How to get your grubby survivor paws on food and water, how to preserve it, how to avoid wasting it—these questions will take up a significant portion of your time and efforts.

Know that the road ahead is not filled with the most delicious meals you have ever eaten. You will be forced to hunt, prepare, and eat things you might never have imagined you ever would. But I promise, it will not be all squirrel and Spam, and with a little old-fashioned ingenuity and creativity, you can find pleasure in eating during the zombie apocalypse.

Excerpted from The Art of Eating Through the Zombie Apocalypse © 2014 Lauren Wilson. © 2015 Lauren Wilson. All rights reserved. All materials used with permission.

Lauren Wilson was infected with a rare strain of undead enthusiasm over a decade ago. From video games and comic books to zombie walks and online communities, there are few corners of the zombie culture she hasn't explored. And she’s got a decent zed T-shirt collection, to boot. Since completing her culinary training at Toronto’s George Brown Chef School in 2008, Wilson has worked in various capacities in the food world, including fine dining, cheesemongering, catering, and teaching cooking classes. She lives in Brooklyn, NY.