How festive are homemade sprinkles? And they’re a cinch to make. Just a little meringue powder, sugar, food coloring, and water. They’re great for cupcakes, birthday cakes, cookies. P.S. The kids will love you.

You can create your own custom colored homemade sprinkles with this recipe. Using store-bought sprinkles now feels like coloring inside the lines. You can flavor and color these however you wish for a special occasion or simply to celebrate your favorite color combinations. Use your sprinkles for Confetti Cookies or one-of-a-kind cake toppers.–Judith Fertig

In the spirit of full disclosure, these homemade sprinkles are not going to be as precisely shaped as those symmetrical commercial sprinkles that get farted out of industrial machinery at the sprinkles factory. Nope. These are going to be slightly misshapen and maybe, at first, even a little clumsy looking. That’s okay. Actually, that’s to be expected. We find the imprecise nature of these practice sprinkles to be quite charming, actually. 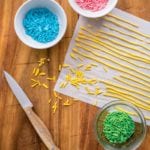 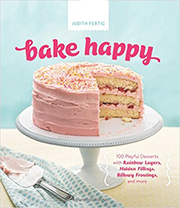 Instead of piping strips or rows or lines, pipe the homemade sprinkles batter into little dots. Let dry for 48 hours.

Homemade sprinkles? I am in! These were easy to make, and it’s so rewarding—an excellent project for a rainy day (although I made these on a humid, stormy, Sydney autumn day, so they did take a little longer to dry than the recipe said). I love how easy they were and how rustic and charming they ended up! I piped on both parchment and silicone and would not recommend silicone. I didn’t use a piping tip, just a resealable plastic bag with a tiny hole cut in it. For once, this was not an okay substitute. You do need a proper piping bag with a tip. Some more directions about how to pipe—it took me 3 trays to finally figure out that you need to go steadily and not too slow or fast to get an even thickness. I tried piping fast and piping slow, so my results were much more rustic than I hoped, but they were not far off from the sprinkles in the picture. These probably needed a good 48 hours to dry out on a very humid Sydney day, when even your newspaper feels damp. I cut them after 30 hours, and they weren’t quite as firm as they should be. The sprinkles do not come out like sprinkles you buy—they are much rougher and more rustic. (I like that.) My sprinkles were a little lopsided, and they were charming to look at. I’ll be making this again with proper equipment. P.S. I re-tested the sprinkles, and here in the chilly and not humid Canadian springtime, they took much less time to dry properly than in humid Sydney. Definitely adjust the drying time for the climate. I also used a tiny piping tip to pipe them out, and it was so much easier.

I love these sprinkles! Being able to customize the color and the flavor was so much fun. While mixing the recipe together was very easy, it takes a little practice to get the piping technique down. Don’t be discouraged if it takes a few rows (or more) to get a nice result, just keep adjusting your technique slightly until you find something that works for you.

Here are a few things that worked for me:

Make sure the mixture is fairly stiff before starting to pipe or it will not stay in separate lines.

Once you’re ready to pipe, hold the tip barely above the parchment and keep your tip moving briskly to the end of the row, piping as straight as possible.

If your lines aren’t perfectly straight, it’s ok. Once the sprinkles are cut into pieces, many of the flaws will disappear.

Shorter rows were easier for me to pipe. I piped the width of the pan instead of the length.

It took me just about an hour to mix and pipe the entire batch. While some of the sprinkles were dry within a few hours, it took the full 24 hours for all of them to dry. I didn’t really need to cut them. Once dry they would break pretty easily with a little pressure from my fingers.

When I was putting this together, I looked at my package of Just Whites dried egg whites. It calls for 2 tsp whites to 2 tbsp water instead of the 2 1/2 tbsp the recipe call for. Maybe this is part of the problem? I followed the recipe’s quantities, though, and in order to get the mixture to a good consistency for piping, I added 90g (3/4 cup) more confectioners’ sugar.

For the flavoring, the quantity may vary depending on the type of extract being used. I used orange oil and only needed 1/2 tsp to get a good orange flavor.

For the coloring, I mixed a nice vibrant orange color, but once dried it was more of a pastel orange.

I was not able to find either of the piping tips mentioned at Michael’s. The #89 was available from a local cake supply store and I also saw it available online. I wonder if there is a more common tip size (with single round holes) that would be recommended to replace the double or triple holed tips that are mentioned in the headnotes. (something I might have on hand already, although I realize the piping would have taken a much longer amount of time).

While this recipe seems simple, it requires a fair amount of skill to pull off. Getting the right consistency is only the first hurdle. The piping was actually a lot more difficult than I realized it would be. Managing the pressure so you get even lines, keeping the tip just the right distance from the parchment to keep the lines separate and moving the bag at the correct rate all took some amount of practice. While I am by no means an expert cake decorator, I’m familiar with piping techniques. Even with some experience, it took until I was about halfway through the piping before I got the hang of the technique for this project. I found that keeping the tip slightly above the tray and moving quickly, regardless of how straight the lines looked, worked best for me.

I also found by accident one other thing that may help with the consistency problem of the mixture. I filled my pastry bag three times, which meant the mixture was sitting out at room temperature for 30 minutes or so while I piped. The last batch was by far the easiest because it had stiffened up considerably from sitting out. It was a little more difficult to push through the tip, but the last lines were much easier to keep even and straight.

I love the idea of making my own homemade sprinkles for decorating cakes, cupcakes, and cookies. The idea that I could make my own and make them in any color I wanted really excited me. I started with just 1 cup confectioners’ sugar and found it a bit runnier than I liked, and my piped lines spread. There were also globs, and in the photo, I noticed that there were lines but also globs. If I’m making my own sprinkles, I’d expect them to resemble something closer to their commercial counterpart. I was looking for a stiffer paste that would result in sprinkles with more body. Using 1 1/2 cups confectioners’ sugar created a thicker paste and rounder piped lines, and I was happier with this result. I used the #89 tip, which worked well, and I also tried a #2 tip, which produced slightly thicker sprinkles that I preferred. I also piped some dots and other simple shapes to test other applications. These needed to dry longer—closer to 48 hours to ensure they were completely dry. The piped lines slid off the parchment with ease, and I didn’t need a knife to cut the sprinkles—I just crumbled the thin lines with my fingers, and that worked well. Now I can customize my sprinkles to any color I want. Oh what fun!