Skip to content
Home » The David Blahg » Tales of a Supertaster

Being a supertaster ain’t all that it’s cracked up to be—especially if you still have to eat your broccoli. David explains and complains. 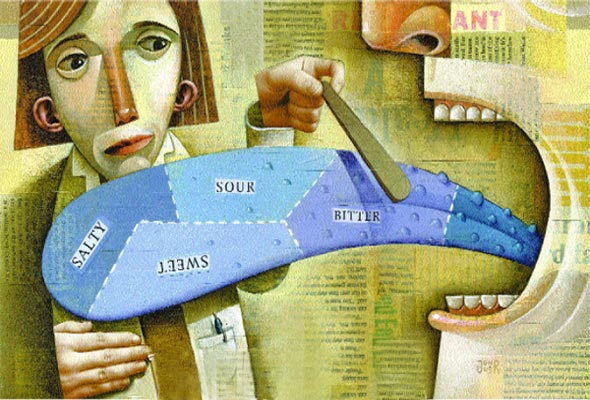 Being a supertaster was the last thing on my mind when my dentist said, “Don’t eat anything for the next few hours,” snapping off a pair of latex gloves and dropping them into the trash. “You could bite your cheek or tongue. Could be nasty.” I’d been white-knuckling it in the chair for almost an hour because I had to get a filling regrouted. Owing to a pain threshold of a third grader, I insisted he dope me up as much as possible. The result was my mouth was numb from the divot of my upper lip all the way back to my right ear. I rubbed my fingers across the side of my face; it felt as if I were touching the stubble of an unkempt stranger. “Remember —” he called after me as I walked out of the office.

“No eating, got it,” I said and headed to my favorite burger joint. I’ve downed hundreds of thousands of meals in my life without incident, I reasoned, I’m sure I can manage another.

As I took a bite of my cheeseburger, I experienced that curious post-dental sensation, as if I’d lost muscle control on the side of my face. I couldn’t tell if the food was being demurely chewed or was dribbling down the doughy-feeling chin of that stubbled stranger. But an even curiouser thing happened: On the numbed side of my mouth, I couldn’t taste anything. It was as if my taste buds had been Novocained, too. I wasn’t about to let a little anesthesia keep me down—there was food at stake here—but after a few more bites, I gave up. The anxiety of wondering if I looked like a slobbering Saint Bernard proved too much, and I headed home.

There were only a few hours left before the medication wore off, and I wanted to test a hypothesis. I opened the refrigerator door and sat on the floor. I ate as many of the foods I find unpleasant to see if they’d register. Endive, which I had always found so bitter, had no effect. Frisée from the bag of mesclun? The same thing. Horseradish: zero. Even some suspicious-looking sour cream the color of slate tasted like nothing. Then I reached for a favorite of mine — a fragrant raspberry. All I got was the grit of tiny seeds. I thought how horrible it must be like to live life without the ability to taste. Then I thought what if something happened, some strange, one-in-a-million medical roll of the dice that caused me to remain this way? A food writer with no capacity for taste. A wave of nausea hit. I had no idea if it was the sour cream or white-hot panic.

After the last bit of Novocain prickled away and I no longer sounded like a bourbon-soaked barfly, I contacted Dr. Linda Bartoshuk, a professor at Yale University who specializes in genetic variations in taste. In fact, she was the person who in the ’80s coined the term “supertaster,” which refers to the 25 percent of the population who have significantly more sensitive taste receptors. (Medium tasters, aka regular tasters, make up 50 percent, while nontasters make up the remaining 25 percent.) We set up an appointment to meet that Sunday at her lab for me to undergo some tests to learn more about the vagaries of, in my estimation, the most important sense after sight.

Bartoshuk is an energetic, articulate woman with appalling housekeeping skills. Her office was packed with years of professorial detritus. She shifted piles of books, newspapers, and food containers from one stack to another until she was eventually able to displace enough mass to clear off a small chair. We chuckled at our alarming physical proximity.

While I explained my cheeseburger experience, Bartoshuk nodded profusely, barely able to wait until I finished. The reason I couldn’t taste my burger, she said, had to do with the intricate interaction of smell and taste. She explained that we have two kinds of smell: orthonasal and retronasal olfaction. Orthonasal olfaction is regular, through-the-nose smelling. Put your nose near a bowl of chicken curry; you smell chicken curry because the odors gather in your nasal cavities and are processed by your brain. In retronasal olfaction, smell occurs in the mouth. The odors from the food you’re eating travel up behind the palate, where they gather and are processed just like orthonasal smells.

“You could smell cheeseburger,” clarifies Bartoshuk, “because of orthonasal olfaction, but you couldn’t taste cheeseburger because your mouth was anesthetized. Your brain didn’t know where the odors were coming from, so it didn’t bother processing them.”

Skeptical? Bartoshuk suggests this experiment to demonstrate retronasal olfaction: Hold your nose and eat a few root beer jelly beans. All you’ll taste is sweet, because your taste buds can detect only sweet, sour, bitter, and salty. Then let go. Root beer flavor will explode in your mouth.

Now that she explained my taste dilemma, it was time to test exactly what was going on in my mouth. I didn’t mind, really. Being the overachiever that I am, I was convinced I was a supertaster, one of those extraordinary and rare persons with an exquisitely tuned tasting instrument who by dint of divine intervention is the envy of a world of plebeian tasters.

Bartoshuk sat me in an uncomfortable chair in her lab and proceeded to swab isolated parts of my tongue and palate with different solutions. My job was to identify the tastes — sweet, sour, bitter, salty — and rate their intensity on a scale developed by Bartoshuk; a scale, she said, that flies in the face of all that came before, by correcting longstanding measurement errors. “There are a lot of people whose whole careers are based on the old scale, and, boy, are they not friendly.” Her pride in one-upping the male-dominated establishment of science was palpable.

Testing to see if I was a supertaster proceeded without incident until a horribly bitter solution called 6-n-propylthiouracil, PROP for short, was washed on my tongue. It was so bitter, I had to lean over the sink, nauseated.

“Do people normally have this reaction?” I asked, spluttering.

“Supertasters do.” There was that word again. Even in my compromised position, I swelled with ego. I could feel it was only a matter of time before I would be officially knighted by the Queen of Taste.

For the last part of the test, Bartoshuk dyed my tongue a deep blue, pressed a piece of plastic against the tip to flatten it, then swung a Zeiss microscope attached to a video camera into place. She turned her head to the lunar landscape glowing on the monitor.

“Oh, is this gorgeous.” All I saw was a collection of blue-colored circles with dark rings around them. “You have small ringed fungiform papillae!” Fungiform papillae are the bumps on the tongue that contain taste buds. The more of these a person has, the smaller they get. And according to Bartoshuk, the rings are rare and are practically a confirmation of supertasterdom.

“But your tongue is difficult to classify,” she said. What? The Queen giveth and the Queen taketh away? To clarify things, she placed a template over the screen and began counting the dots inside. Within a six-centimeter circle, she found more than 50 fungiform papillae. “And that puts you on the extreme supertaster end,” she said. “You’re actually one of the highest testing male supertasters I’ve ever seen.”

“Yes!” Genetically irrefutable confirmation of my taste superiority. Surely this now catapults me into the pantheon of food-writing greats that includes Molly O’Neill, Jeffery Steingarten, Calvin Trillin, and Alan Richman. Quite frankly, I wouldn’t be surprised if it bumped me even higher. After all, if only 25 percent of the population are supertasters, and I’m pushing against upper limits of the chart, as Bartoshuk says, chances are I’m in a class by myself.

“But that’s not necessarily a good thing.”

“I beg your pardon?”

According to Bartoshuk, the prefix “super” was intended to signify an unusual sensitivity to tastes, especially bitter, not, as I imagined, a surfeit of gustatory discernment and supremacy. Because supertasters react so strongly to bitter foods, most don’t eat enough vegetables. I certainly don’t. The result is a higher incidence of colon cancer among supertasters. In addition, most of us tend not to like high-fat foods, reducing the chance of cardiovascular disease. But there’s a subset of super-tasting men, of which I discovered I’m a card-carrying member, that craves fatty foods. So the list of health risks grows by the addition of an increased risk of heart attack and stroke, not to mention unbridled girth. Oh, and let’s not forget diabetes.

I tried to shake the my-tongue-is-better-than-your-tongue mentality and look at my newly crowned status as a supertaster for what it is: a liability. But that word super. Why couldn’t she have called my people unfortunate tasters or to-be-pitied tasters? I certainly never would have agreed to be tested in order to be categorized as unfortunate. But Bartoshuk did offer this consolation: “You inhabit a world of neon tastes where everything is more intense, while, as a nontaster, I live in a pastel world.”

Nonetheless, I still have to eat my vegetables.

© 2006 David Leite. All rights reserved. All materials used with permission.