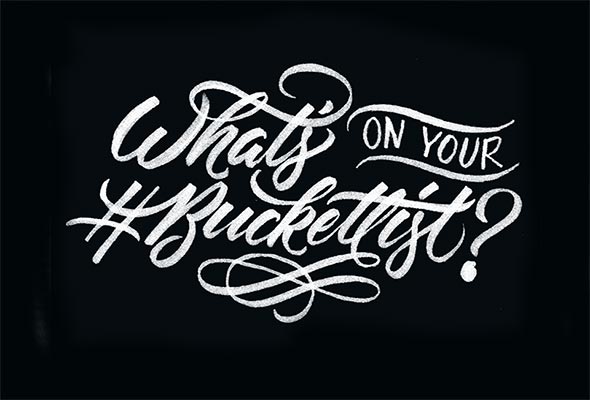 Resolution. The word just seems so daunting, you know? So unrelenting. So oppressive. So forboding. So resolute. Can you feel the weight of it? We certainly can. No wonder so many resolutions get dropped early in the New Year. Gah. Here’s the thing. We’ve got nothing against intentions. It’s just that resolutions feel like the sinister, judgmental, vengeance-seeking older stepsister of intentions. Which is why we long ago ditched them for the infinitely less shame-inducing bucket list. A bucket list is something that fills you with inspiration and gumption rather than defeatism and depression. Something that’s doable but without the dread. Something that inspires fist pumps rather than groans. We asked a handful of folks to divulge their culinary bucket lists past and present. You’ll find their responses, in all their raw honesty, below. We want to hear from you about what you most rocked at in the past year and what you intend to rock in the year to come. Let us know in a comment below!—Renee Schettler Rossi

This was the year I finally got around to eating Mexican grasshoppers. In the New Year, I would like to finally conquer my fear of biscuits. Making them, I mean, not consuming them. I am a champion biscuit eater. Of course, I would also like to lose 20 pounds which, sadly, means fewer biscuits in my immediate future. So I will learn to make beautiful buttermilk biscuits in 2016 and then give them away to strangers.
—Michael Procopio, blogger at Food for the Thoughtless

[Editor’s Note: We wish all the best with both the biscuits and those 20 pounds. We suggest he begin with this buttery buttermilk biscuits recipe that calls for just three ingredients and that folks are referring to as “spectacular,” “sinful,” “easy,” “airy,” “buttery,” “lofty,” “an absolute keeper,” and “perfect.” Sorta makes you want to add this recipe to your culinary bucket list, too, eh?]

Unlike Michael, I haven’t tried a grasshopper, Mexican or otherwise. However, this past year I have perfected the art of making fried rice with whatever leftovers are in the fridge. I eat more veggies this way, too. In 2016, I am getting back to basics. I can bake a cheesecake with nary a crack and have made croissants from scratch just for fun, but ask me to roast a chicken or grill a steak to medium-rare, and I’m shaking in my shoes. This year, no more rubber-skin poultry or overdone beef for me. I’m going for perfectly crisp, golden brown chicken and steak that can be sliced with a spoon.
—Kim Medalis, LC marketing intern

“Mom, this kale salad is really good,” said my son Michael, 13. That’s it. I’ve now achieved all there is to achieve. There is nothing left to accomplish.
—Laura Morrison, MD and mother of four

2015 was a tasty year in the kitchen for me. For one, I won Chopped on Food Network, and that was absolutely exhilarating. In truth, what really sated me this year was being able to meet and collaborate on all sorts of cooking projects with some exceptionally talented women I look up to in the food world. I discovered an incredibly collaborative and gifted community, made of women chefs, farmers, food business owners, cooking experts, and, of course, writers and journalists. Looking ahead, my kitchen in 2016 is loaded with culinary projects, events, and more work on Food Network. I also have my eyes on the superb new food program at Yale, but mostly I’ll be concentrating on finally finishing my cookbook on comfort chic food. Happy New Year to all of you!
—Silvia Baldini, a super talented and lovely chef

We moved from Manhattan to the desert Southwest at the very end of 2014, and so 2015 for me was largely about learning how to exist without fresh sea scallops and flounder each week. [Cue self-pity and sympathy for me here.] I’m acclimating. As for 2016, my husband and I are trying to embrace the things that we can have here and have several garden beds and container gardens in our backyard that appear to be thriving. Here’s to a year filled with walking outside and harvesting our own lovelies—cilantro and scallions and baby Tokyo turnips and mache!) rather than having to drive to the store for stale, trucked-in-from-god-knows-where vegetables.
—Renee Schettler Rossi, editor in chief, Leite’s Culinaria

I had a first go of a Day of the Dead bread recently. It came out kind of crooked (better luck in 2016!), but the dough was a beautiful color and great to handle. Six of us wound up ripping it apart and eating it with soft butter—fun!
—Claire Shields, home cook (what on earth is she making now?)

This year I gave some thought to my culinary bucket list, which was fun because I’m always resolving, and that’s rarely any fun at all. The bucket list is going to be my new resolutions list and, if nothing else, I’ll die a happier (if not better) person with a cleaner room and more savings. In 2016, I want to go to the interior of Mexico. I’ve spent so much time and passion researching and writing and telling people about various Mexican regional cuisines, yet I haven’t been to most of those regions in my adult life. Oaxaca is the first place that comes to mind. For the mole, yes, and the markets, and the black pottery. And then Veracruz to eat yucca and plantains and black bean stuffed masa cakes like those I had at El Bajío in Mexico City. Maybe I’ll save Mérida for 2017.
—Carolynn Carreño, food writer and cookbook author

I love nettles. I love drinking nettle tea (it’s anti-inflammatory), I love nettles on pizza, I love pasta made with nettles, and most of all I love nettle soup. But, they’re hard to come by. No gardener in her right mind plants them because they are a weed and they sting like a hundred molten hot needles if you accidentally brush against them. (Been there, done that, OUCH.) So, you have to forage for them or hope to find some inspired person selling them at a farmers’ market. Around here they make their appearance in January. So my bucket list item is to put on my rose-pruning leather gloves and go find a big batch of nettles to harvest, somewhere within an hour’s drive. My big culinary discovery this past year? Escarole! Sautéed in olive oil with garlic. My new favorite lunch—an entire head of escarole. Since I didn’t know what I was missing, it was never on my bucket list, but it should be on yours.
—Elise Bauer, founder of Simply Recipes

The year 2015 was EXCEPTIONAL in my quest for cooking and baking excellence.The one standout for me was elevating my sourdough, both country white and rye, to near perfection. For 2016, I plan to achieve my ultimate dream. In April, I will get the chance to bake bread in France!
—Larry Noak, Leite’s Culinaria Recipe Tester

These days I’m working mainly with older published materials, and I’ve become interested in assembling a library of a few of the earliest cookbooks related to a significant number of America’s ethnic communities this year. The rules I’ve set for myself are the following: 1. The books must be directed to the broad American public, not just to immigrants from a particular community or to their immediate descendants, so no charitable (community) cookbooks, as from a Russian Orthodox Church or an Italian fraternal organization. 2. The books must have been published first in America. 3. Excluded are books that were originally in another language and translated into English. 4. Eligibility of bilingual books will be considered on a case-by-case basis. I’d be delighted to have leads.
—Nach Waxman, founding partner, Kitchen Arts & Letters