Here’s our guide on how to buy a salmon, an errand that can be more confusing than confidence building. Let us walk you through the most important things to know, with help from the imminently experienced cooking teacher and cookbook author, Diane Morgan. 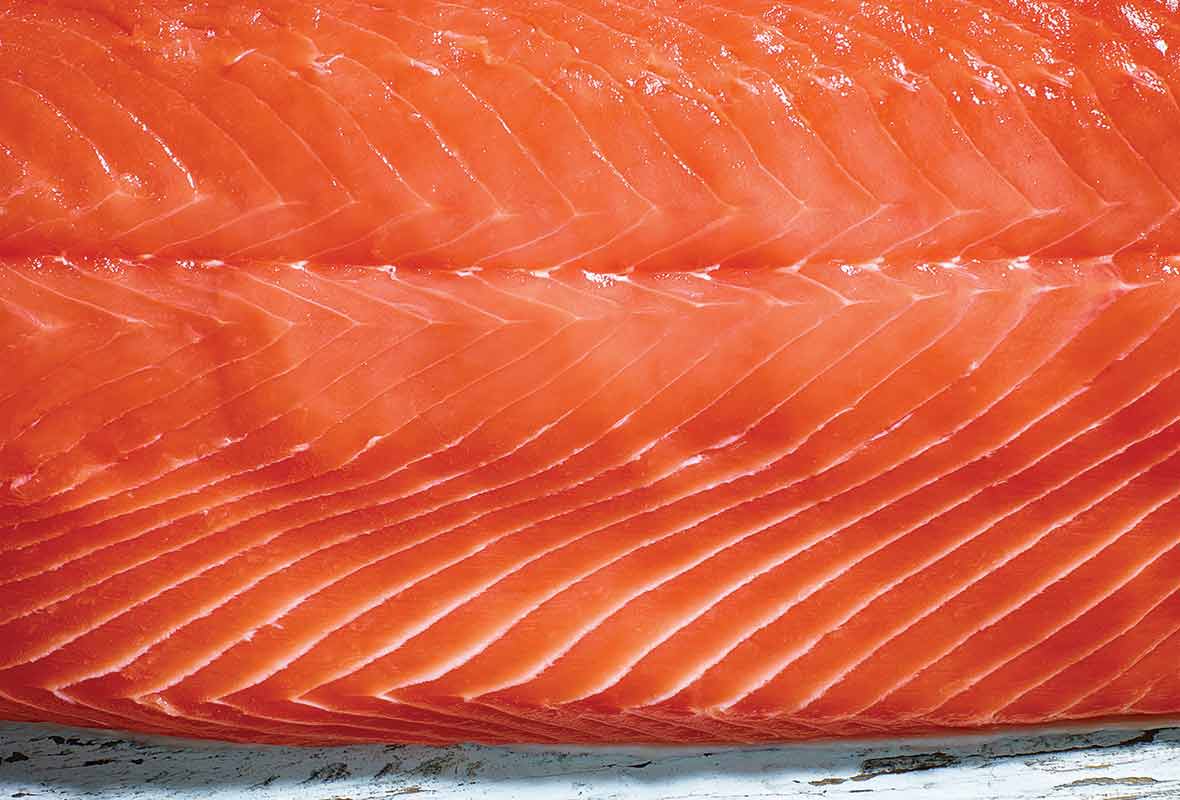 It can be downright confounding as you stand at the seafood counter and are confronted by gorgeous slabs of coral salmon on ice, each with a different little sign crammed full of confusing and sometimes misleading marketing terms. Organic! Farm-raised! Wild-caught! Conventional! It’s enough to make you quietly curse and slink over to the chips aisle. Before you resort to that, though check out the following cheat sheet, excerpted from author Diane Morgan’s eminently encyclopedic book Salmon: Everything You Need To Know. Then step back to the seafood counter with confidence.–Renee Schettler

Along with knowing how fresh fish is, consumers rightfully want to know, now more than ever, where the fish is from and how it was raised.

Learn the names of the species, such as king, coho, or sockeye for Pacific salmon, and learn the marketing names, the seasonality of the fish, and, best of all, eat it often enough to distinguish how it should taste.

The list that follows will help you understand the often-confusing labels that appear on the little white signs stuck next to fillets indicating the origin of the fish and whether it is wild or farmed.

Most salmon labeled “organic” is actually farmed salmon originating from the North Atlantic, off the coasts of Ireland, Nova Scotia, and Scotland. Europe has had organic-certifying agencies in place for over fifteen years. Salmon farms with organic certification must operate in adherence to a strict set of standards.

You should not see any salmon, or for that matter, any fish or seafood labeled “certified organic.” The USDA, which governs organic rules in this country, has not yet set standards for aquatic species. The USDA organic seal applies only to crops and animals raised on land that meet strict federal guidelines.

This is unregulated marketing language that pertains to farmed salmon. As consumer concern for the environment and the quality of the fish continues to grow, smaller aquaculture businesses are responding and adopting environmentally friendly and responsible aquatic-farming practices. Stocking densities are reduced, the feed is organic or plant-based, the salmon are raised without the use of antibiotics, the pigment used in the feed is from a natural source, and the use of pesticides to treat sea lice is strongly restricted. In addition, a relatively new method of salmon farming involves growing fish in tanks in inland locations away from the native habitat of wild fish stocks. This is a promising development in aquaculture, though it is also more expensive than raising salmon in open net pens in protected ocean coves.

Aquaculture producers trying to distinguish their farmed salmon in the marketplace—because of the environmentally sensitive and, in some cases, patented practices they follow—have branded their salmon and sought approval from seafood watchdogs like the Monterey Bay Aquarium Seafood Watch program. Among them is Verlasso, a proprietary brand of AquaChile, which is the largest producer of farmed salmon in Chile. Verlasso has received a “good alternative” recommendation from the Monterey Bay Aquarium program. Following is the aquarium’s detailed summary illustrating how cautious and focused these watchdog groups are on educating the consumer.

Verlasso was given a ‘good alternative’ designation because it uses a genetically modified yeast as a feed ingredient, thereby reducing its reliance on fishmeal and fish oil from wild fish. The salmon are farmed at lower densities than typical industry standards, and while chemical use is lower than the norm in Chile, antibiotic and pesticide use for Verlasso remains a high concern.

Despite the open nature of its net pens, Verlasso has demonstrated an improvement upon the issues surrounding pollution and habitat damage. Atlantic salmon are not native, but studies show these salmon are very unlikely to establish self-sustaining wild populations in Chile. While disease has caused production problems in Chile as a whole, the potential effects on wild Chilean fish are not currently a high concern and therefore the risk of impacts from both escape and disease events are now considered moderate. Verlasso Salmon is sold in the United States as the brands Verlasso and Verlasso Harmoniously Raised Fish.

These are salmon that are caught in their natal waters by commercial or tribal fishermen using the troll, drift-gill-net, or purse-seine fishing method, all of which are tightly regulated by state fishery management agencies.

A campaign to boost the image of Pacific salmon caught off the coast of California, Oregon, and Washington had to back off from using the word wild because fish activists objected, as many of the salmon caught off the Pacific coast are reared in hatcheries. These fish are now labeled “wild-caught salmon.” In Alaska, hatchery-reared salmon account for about 30 percent of the catch. In the lower forty-eight states, hatcheries account for more than 50 percent of the salmon caught.

Where you can learn more about sustainable seafood

For shopping for every type of seafood, I highly recommend you download the Monterey Bay Aquarium Seafood Watch guides on your smartphone or tablet. It is complete, up-to-date information that identifies specific fish and shellfish as the best choice, good alternative, or a specimen to avoid completely due to fishing practices, environmental factors, or sustainability issues.