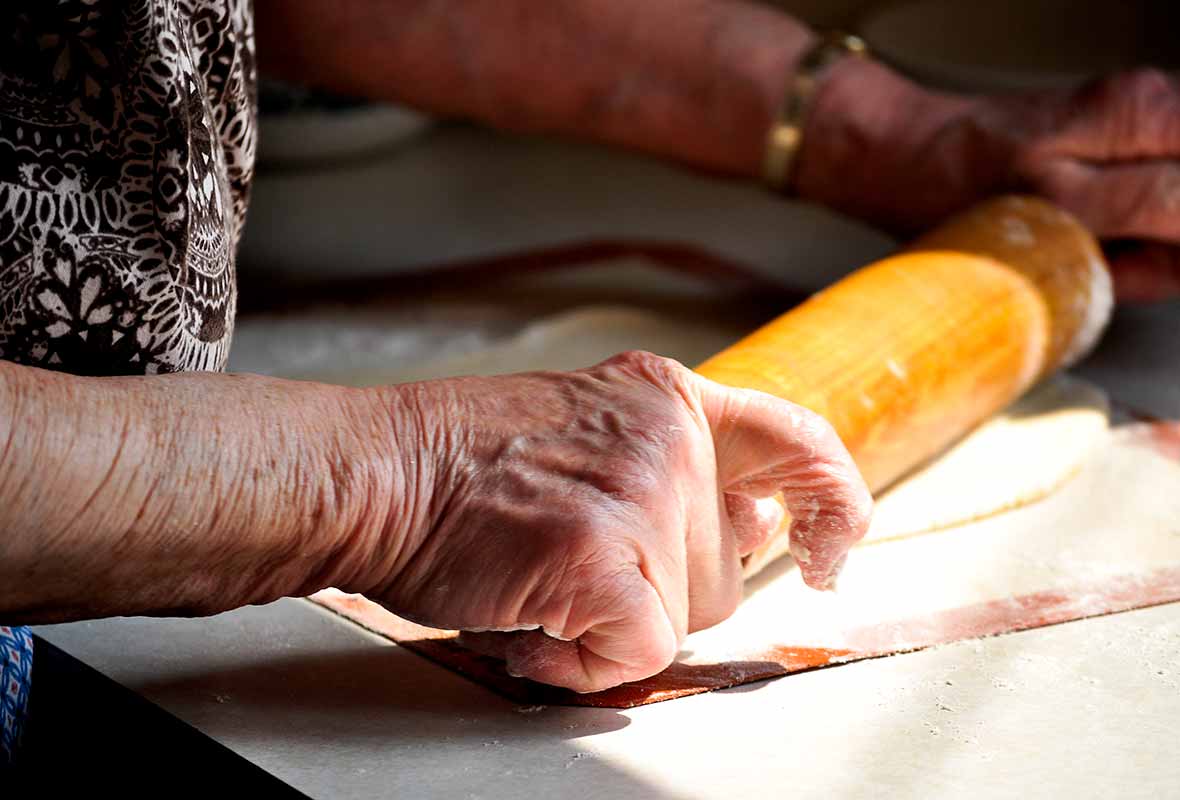 Everyone, it seems, has a grandma kitchen story. Essentially some recollection of her in the kitchen baking cookies or pie and imparting words of wisdom. Idyllic, no? Yet with respect to grandmas everywhere, some words of wisdom are more profound than others. Diana Abu-Jaber took in some incredibly well-intentioned advice doled out by her stoically stubborn and fiercely feminist maternal grandmother. “Never learn how to sew, cook, type, or iron,” the young Abu-Jaber was cautioned by her grande dame, a matriarch determined to pass down more than just her recipes. And, as we learn in Abu-Jaber’s memoir, Life Without A Recipe, from which the below excerpt is taken, the young granddaughter was equally determined to define womanhood on her own terms.–Renee Schettler Rossi

Every year between Halloween and Christmas, my grandmother Grace transforms her apartment into a bakery. Tables and chairs are covered with racks of cooling cookies, eight baking sheets slip in and out of the oven—as tiny as something in a troll’s house. The Mixmaster drones. A universe of cookies: chocolate-planted peanut butter; sinus-kicking bourbon balls; leaping reindeer and sugar bells; German press-form cookies from her grandparents’ Bavarian village—Springerle—green wreaths, candy berries; and a challenging, grown-uppy variety named for the uncut dough’s sausage shape: Wurstcakes. All part of Grace’s arsenal: she’s engaged in an internecine war with my father, Bud, over the loyalties of the children. Her Wurstcakes are slim as Communion wafers. Bud dunks them in his demitasse of ahweh and calls them “Catholic cookies.” Her eyes tighten as she watches him eat. “Only higher civilizations bake cookies,” she says to me, raking fingers through the shrubbery of my hair. “I don’t know how you people would celebrate Christmas if I wasn’t around. Run wild like savages.”

My parents were married in Gram’s church. When the priest presented Dad with a contract to raise his children within the Catholic faith, Dad signed in Arabic. He nudged Gram in the ribs, as if she were in on the joke, and, instead of his name, wrote: I make no promises. In my parents’ satiny wedding photographs, Grace stared at Bud. I’m on to you, friend.

“Never learn how to sew, cook, type, or iron.” She bends over the board, passes the hissing iron back and forth, slave rowing a galley ship. “That’s how they get you.” She pauses long enough to turn that shrewd gaze on me and after a moment I look away. There’s cooking, sure, but then there’s baking. I learn from Grace that sugar represents a special kind of freedom. It charms almost everyone; it brings love and luck and good favor. Cakes and cookies are exalted—a gift of both labor and sweetness—so good a smart woman is willing to give herself to them.

Diana Abu-Jaber is an award-winning novelist and memoirist who weaves her American and Jordanian upbringing into her work. She teaches writing and literature at Portland State University. Abu-Jaber splits her time between Portland, Oregon and South Florida. Life Without a Recipe is her latest culinary memoir.