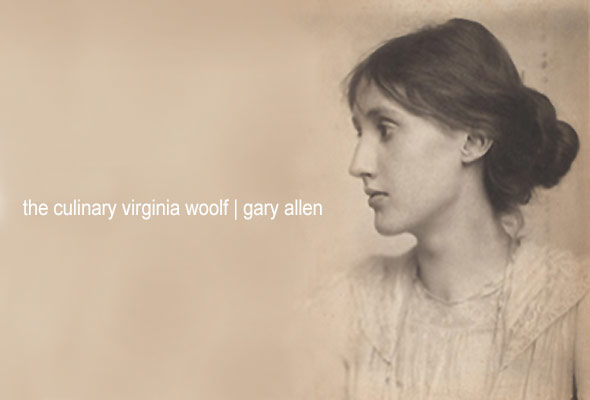 Reader Ann Drak recently wrote us with the following request: “I’m looking for foods of England from the early 1900s, particularly the foods of the Virginia Woolf set.”

In reading the diaries and letters of author Virginia Woolf and her Bloomsbury friends, it’s pretty apparent that meals were little more than an excuse for interesting people to gather. Comestibles were beneath consideration and played a secondary role. Woolf was curious about the actual food and understood its importance to her work, yet she was also keenly aware that in the writing of her day, too much attention to such seemingly mundane topics would be regarded as de classé. Bear in mind the context in which Woolf lived. She and her social friends were of the educated class and had servants who did the cooking. She and her literary friends were products of British universities, where the classics—whose epic authors rarely mentioned the preparation of meals—were regarded as the foundation of literature.

Woolf, clearly torn between what she knew to be significant and what she knew to be literary decorum, lamented this conundrum in A Room of One’s Own: “It is part of the novelist’s convention not to mention soup and salmon and ducklings, as if soup and salmon and ducklings were of no importance.” Still, when food was mentioned in her novels, it was only in passing or in tandem with female characters, who were naturally involved in things of the table. There are, however, three notable exceptions:

In Orlando, she writes about the time that Orlando spends with gypsies in Greece and how he discovers that the Greek language had no word for beautiful. To describe a sunset, Orlando instead exclaims the closest approximate: “How good to eat!”

In A Room of One’s Own, Woolf famously compares the dinner fare served at male and female colleges. While the men eat sumptuously, the women must make do with bland, dreary foods. “A good dinner is of great importance to good talk,” she complains. “One cannot think well, love well, sleep well, if one has not dined well.”

In To the Lighthouse, the reader encounters countless small domestic scenes including coffee cups and ordinary meals. We also see a sharp departure from this restraint when Woolf passionately serves up two pages of a rapturous description of boeuf en daube, contrasting its succulence with the abomination that “passes for cookery in England.”

It’s tempting to think that Woolf’s appreciation for French food came from writers like Elizabeth David, but Woolf’s suicide occurred a decade too early. Nonetheless, David’s books can provide an outline of what was considered to be good cooking at that time, at least in the south of France and Italy, places that people of Woolf’s class would have known well. Here are two of David’s recipes over which Woolf may very well have swooned.

Boeuf en Daube a la Niçoise
Elizabeth David, from whose files this recipe comes, suggested accompanying this meal with a hearty red wine from the Rhone region, such as a Gigondas or Châteauneuf-du-Pape. She consented that a Vin de Pays from  Mt. Ventoux or the Ardeche may work well should a budget be in place.

Directions
1. Heat the oil in a small pan, then add the onion, carrot, celery, and shallots. Sweat them for a minute or two.

2. Add the remaining marinade ingredients and simmer for 15 to 20 minutes. Cool, then strain the marinade before using.

3. Choose an earthenware or other flameproof casserole with a lid that is just large enough to contain the beef. Arrange the beef in the casserole and the carrots, garlic, and herbs around the beef.

4. Pour the cooled marinade into the casserole, then top with the slab bacon.

5. Cover the casserole with oiled paper and the lid.

7. Remove the lid, add the olives and tomatoes, and cook for an additional 1/2 hour.

8. Remove from the oven. Slice the beef thickly. Cut the bacon into cubes and serve atop the beef, which should be served moistened with a bit of the cooking liquid.

*Note: David suggests bay leaves and the typical blend of herbs de Provence (thyme, marjoram, and rosemary). She says they may be fresh or dried; consequently, the measurements are “to taste.” Note that all temperatures and measurements have been adapted for use in American kitchens.

Aigrossade Toulonnaise
This simple garlicky aiöli was commonly served in the South of France, often with vegetables and chickpeas. It’s included here because it’s typical of the Provençal dishes that Woolf and her friends might have known.

For the aigrossade
Mixed vegetables, approximately 3 pounds steamed or boiled, such as artichokes and green beans, dried beans, or chickpeas

Method
1. In a heavy bowl or mortar, combine the yolks, garlic, mustard, salt, and pepper. Stir until uniformly combined.

2. Slowly add a few drops of the oil and stir until all the oil is absorbed. Slowly add a little more oil, a few drops at a time, stirring all the time. Continue to add the remaining oil in this fashion. From time to time add tiny amounts of tarragon vinegar, and then — when almost done adding the oil — add the lemon juice. Ms David says you should “Stir steadily but not like a maniac.”

3. Strain the cooked vegetables, coat with the aiöli, and serve in a warmed dish. Do not attempt to reheat.

Mennell, Stephen. All Manners of Food: Eating and Taste in England and France from the Middle Ages to the Present. Urbana, IL: University of Illinois Press, 1996.