The balmy, semi-tropical climate, dramatic landscapes, and famous eponymous wines of Madeira have been attracting visitors ever since the Portuguese settled this lovely Atlantic island in the early 15th century. Cristóvão Colombo called at the port of Funchal on his epic voyage to the Americas, and the harbor of this picturesque capital city is now often crowded with cruise ships. 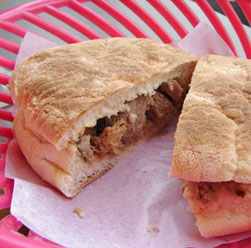 During a recent visit with David, I discovered a world-class sandwich at the Mercado dos Lavradores, Funchal’s down-home farmers’ market, which is open daily but busiest on Fridays. This local specialty is known as porco com vinho e alhos, after the vinegar-and-garlic marinade used to flavor its filling: tender chunks of pork loin braised with summer savory, oregano, and fresh bay leaves from the laurel trees that grow wild on Madeira’s soaring volcanic peaks. The meat is scooped into a round, pillowy bolo de caco (griddle bread) and doused with a ladle of the vinegary jus spiked with fiery malagueta peppers — which are larger than Portugal’s famous piri-piri peppers, but just as incendiary. Accompanied by a frosted pint of Sagres lager, it was a fine lunch for a hungry traveler. In a moment of heroic self-sacrifice, I wrapped half the enormous sandwich in a napkin for David, who was stuck in his hotel room resting that torn Achilles tendon, which is starting to get far too much press, if you ask me.

Funchal’s waterfront is filled with restaurant hawkers and garish menu boards offering “local seafood” (read: Anglicized or Americanized touristy fare), but that night David and I ferreted out the narrow cobblestone back alleys of the old port district, where we were told we could really find the city’s best seafood in the quarter’s tascas, or hole-in-the-wall eateries.

Seduced by Restaurante Gavião Novo’s excellent reviews, and its hawker who simply wouldn’t take no for an answer, we squeezed into the last empty table just ahead of a queue that suddenly started forming in the alley. Menus arrived promptly, along with an aperitif of crisp dry Madeira. (Sweet Madeiras are more well-known, but there’s no better way to kick off a meal, we discovered.) We enjoyed it with excellent dense bread, olives, and the wonderful generic soft cheese simply known as amenteigão, a term referring to its butter-like texture.

I ordered the catch of the day, a red mullet, which came expertly grilled, drizzled with olive oil, and with a side of those fabulous creamy Portuguese potatoes David has been talking about forever. But it was his lapas com manteiga e alho (limpets with butter and garlic) that won, hands downs, our ongoing best-dinner competition. The saffron-colored gastropods cradled in their frilly-edged lavender-blue shells were drizzled with melted garlic butter and came sizzling to the table in a beat-up iron pan. We quickly demolished the first order and called for a second, slurping buttery limpet juice from the empty shells while we waited. David, who has quested far and wide to satisfy his obsession for these highly prized and hard-to-find shellfish, said these were the best ever. Óptimo, to use his word. I couldn’t have agreed more.

Janet Boileau is a food writer and editor based in Ottawa, Canada. She's also the founder and publisher of Taste & Travel magazine and the former director of publishing for the United Nations University Press. A world traveler, she likes to write about the intersection between food and culture.