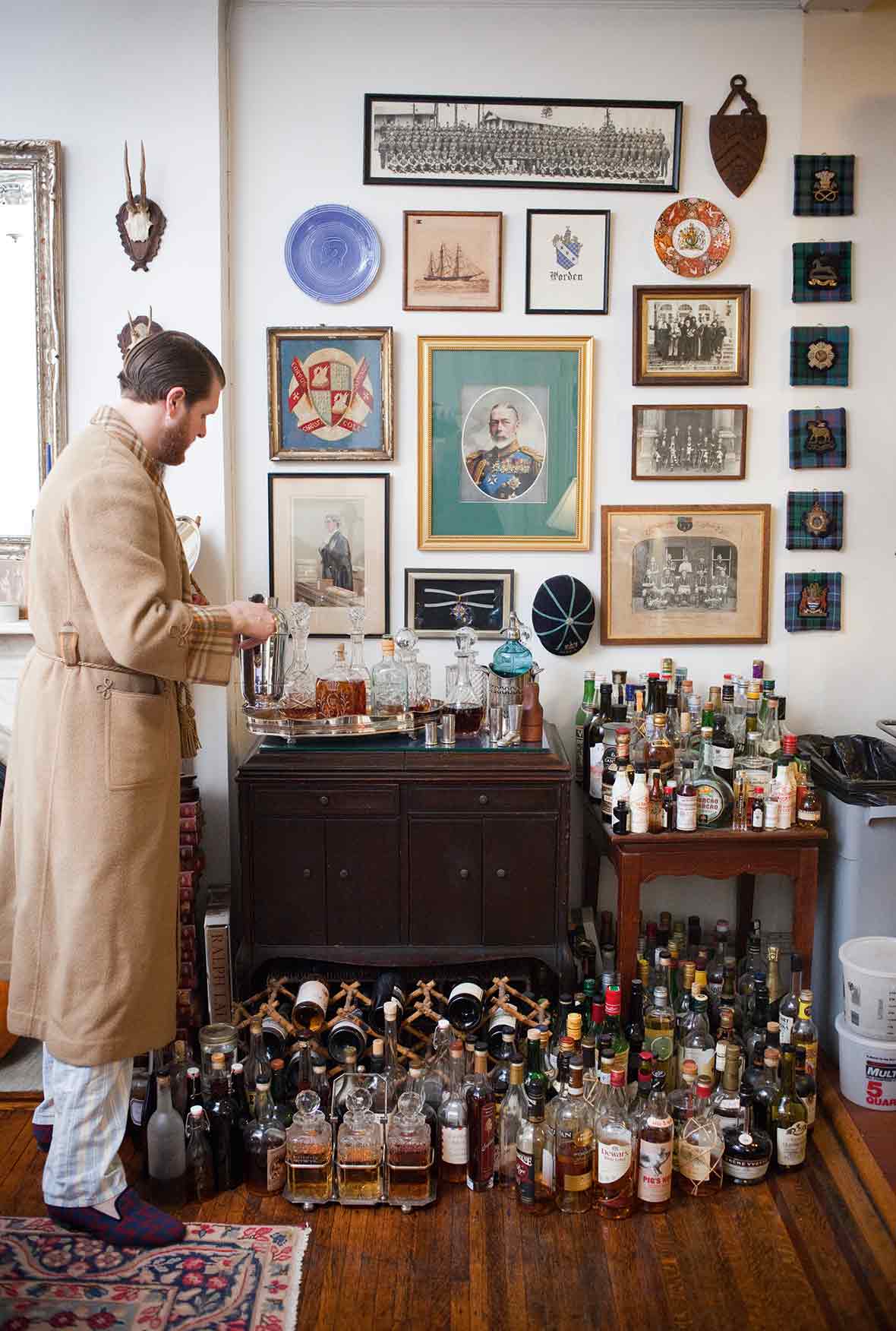 Adapted from Gustav Temple | How to be a Chap | Gestalten 2016

It’s easy to become enamored, if not obsessed, with a bygone era you’ve romanticized in your runaway imagination. If that particular era happens to be a tweed-wearing, fine booze-appreciating, facial hair-espousing, literature-loving, music-admiring moment in Britain’s past, and you aren’t already a hipster living in Brooklyn, then you’re in luck. There exists a bi-monthly magazine in Britain devoted to exactly that. And it’s called, quite brilliantly, The Chap. It even has a manifesto and a recently published guidebook titled, natch, How To Be Chap. One of the topics of admiration among chaps seems to be drinking. If you’re the sort who revels in a little old-fashioned British eccentricity, read on for an excerpt from the How To Be Chap manual.—Renee Schettler Rossi

When it comes to consuming alcoholic beverages, a Chap shows no restraint. Booze is as much a part of his life as good manners, for alcohol is usually the only form of stimulant he favors—except tobacco.

The principal Chappist alcoholic drink is the cocktail. This ancient beverage of unknown origins still carries historical associations with glamour and sophistication—and also rebellion. During Prohibition in the U.S., louche fellows would use the sugary syrups and fruit juices in cocktails to mask the rough and foul­-tasting illegal distillations of gin, vodka, and whiskey that they mixed them with. To drink a Manhattan was to defy the law, and today to drink a Manhattan is to defy sensibility. Despite their ubiquity around the world, cocktails are still only available in select establishments, meaning that a Chap will have to make a bit of an effort to get one; he cannot simply walk into the nearest pub and request a mojito. Unless he is in Havana, one of the most Chappist travel destinations in the world.

Every cocktail a Chap drinks—and he sticks to the classics, rather than ridiculous new concoctions involving liquid nitrogen and protective headwear—takes him to a delicious realm of the imagination based on its origins. He drinks a Rum Grog and recalls Lord Nelson and the Navy’s rum ration. Until as recently as 1970, every member of Britain’s Royal Navy was issued with a daily rum ration, consisting of half a gill of watered­-down rum twice a day. It was known as a “grog” and the name still survives as the term for a rum ­and ­water drink. Soldiers on their way to the Normandy beaches on D­-Day were given a nip of rum to steady their nerves, which didn’t help much, but the thought was there.

When he drinks a dry martini, a Chap recalls many things. James Bond, for one, and Ian Fleming’s fastidious recipe in Casino Royale: “Three measures of Gordon’s, one of vodka, half a measure of Kina Lillet.” He also recalls Winston Churchill’s strict edict regarding quantities of vermouth, of which the great Prime Minister was not a fan. When asked how much he wanted in his martini, he replied: “I would like to observe the vermouth from across the room while I drink my martini.” The Churchill Martini, which all Chaps drink regularly, is little more than gin poured over ice while vermouth is presented in the same room. A single sunbeam is allowed to travel through the bottle, but only if it comes from the direction of France.

At the conclusion of the cocktail hour, which can be any time between six pm and six am the following morning, a Chap will switch to other drinks. He drinks real ale, served in a glass with a handle and poured straight from the cask; a Chap is unlikely to be seen drinking from a bottle of Mexican lager with a piece of lime sticking out of it. The wines of Europe he will enjoy and know about, but not too much and therefore avoids being a wine snob. He admires more the approach of Sir Kingsley Amis, who while respected for his copious writing on drink (and his copious drinking while writing), also detested drink snobbery: The sommelier showed him the wine list, murmuring a benediction in French. “I’ll have the Graves,” Kingsley told him, pronounced (wrongly and deliberately) to rhyme with “waves.” Lifting his glass, he sniffed, tasted, and spat the wine on the table. “Very good,” he said.

A Chap will also have a taste for forgotten elements of the fortified wine brigade, such as Madeira, Amontillado and vermouth. Despite Churchill’s orders regarding this Italian concoction of macerated herbs, vermouth still finds its way into a Chap’s Negronis and Manhattans.

Port is probably the most Chappish drink of all, partly due its history being intricately tied up with the military history of Britain. When, in 1678, relations with France went sour, again, Britain banned the import of French wine altogether. The Methuen Treaty of 1703 boosted trade between Britain and Portugal, and while the British began to enjoy Portuguese wine, they found that it didn’t travel well, arriving via the Bay of Biscay in a poor, semi­-disintegrated state. So two English merchants discovered a new technique while in Portugal, which boosted the wine’s longevity by adding brandy. Port is today consumed in vast quantities, though not as vast as the legendary “six­ bottle men” of the Regency, who were clearly made of much sterner stuff than us. It is traditionally consumed with Stilton cheese, with the bitterness of that dairy product contrasting very well port’s tangy sweetness. Chaps always favor tawny over ruby port, for the latter tends to be too harshly sweet, and if you want a simple phrase to look out for as a guarantee of a decent bottle of port—look for the letters LBV, Late Bottled Vintage.

There is no question that a healthy consumption of alcohol will occasionally lead to a hangover. In Norway they say, “Carpenters in the head.” The French call it “Wooden face.” In Germany it is “The wailing of cats.” In Chile the phrase translates as “I have the monkey.” Spain has the poetic “Pulling back of the wave.” But Kingsley Amis nailed it in Lucky Jim when he wrote: “A dusty thudding in his head made the scene before him beat like a pulse. His mouth had been used as a latrine by some small creature of the night and then as its mausoleum. During the night, too, he’d somehow been on a cross­-country run and then been expertly beaten up by secret police. He felt bad.” Chappish literature too has provided potential hangover solutions, some of them still worth giving a go. In Jeeves Takes Charge, the ever­ creative butler comes up with his own recipe that contains Worcestershire sauce, a raw egg, and Cayenne pepper for a hungover Bertie Wooster: “Gentlemen have told me they find it extremely invigorating after a late evening.”

The simple fact is that when one is hungover, one has uprooted oneself from the Tree of Life. Casting one’s mind back to the Night Before, one may dimly recall being at one with the Universe, at one with one’s chums and at one with whatever was in one’s glass. But, during the hours of fitful and perspiring slumber that, the Morning After, now separate you from the Night Before, something horrid and unthinkable has happened. You have been separated, in some ghastly divorce of the mind from its moorings. This is what Kingsley Amis called the Metaphysical Hangover. You went to bed, or rather tumbled into the nearest horizontal repository, perhaps a sofa, a pile of coats or a ditch, with a smile upon your face and the lines of your favorite poetry or song ringing in your ears, having ended the evening by regaling your companions with the fruits of your fecund and extremely awakened mind.

Now, the decree absolute has been handed out. While your former drunken self keeps the house, the money and the children, your sober self is left to reside in a filthy bedsit, where you will lie in agonized wait for a reunion. Thankfully not for long. By the early evening, all will be well again and the happy family of you, your mind, and even your slightly damaged body will be reunited, in the pub. Then it starts all over again. It may sound odd, but one remedy is to take up your shovel. Connect with the earth. Build a bonfire. Get your hands dirty and work up a sweat. If you haven’t got a garden, do it in the bath. Heat has incredible effects on hangovers, which is why we hardly seem to notice them while in hot countries or near beaches. Take an extremely hot bath, as hot as you can take it without removing a layer of skin; a long, leisurely shave with a best badger shaving brush—but not the cut­throat razor; not today. An hour later, an absolute slathering of the fizzog with all the unguents in your bathroom cabinet (including the cough mixture and the Night  Nurse) and you will look and feel, if not like a million dollars, then at least a tenner better than you did when you awoke.

Gustav Temple is the founder of The Chap, a bi-monthly British magazine that's written rather cheekily and espouses a more "dandified" manner of living, including pipe smoking, wearing proper attire, the playing of sports, and respecting matters of etiquette. He is the author of How To Be Chap.