Jonas Crambyn explains the joy and celebration of Dia de los Muertos in the following excerpt from Taco Loco! To North American sensibilities, it might seem morbid or disrespectful, but in Mexico, it just shows that you have the guts to stand up to death and celebrate your loved ones in style. 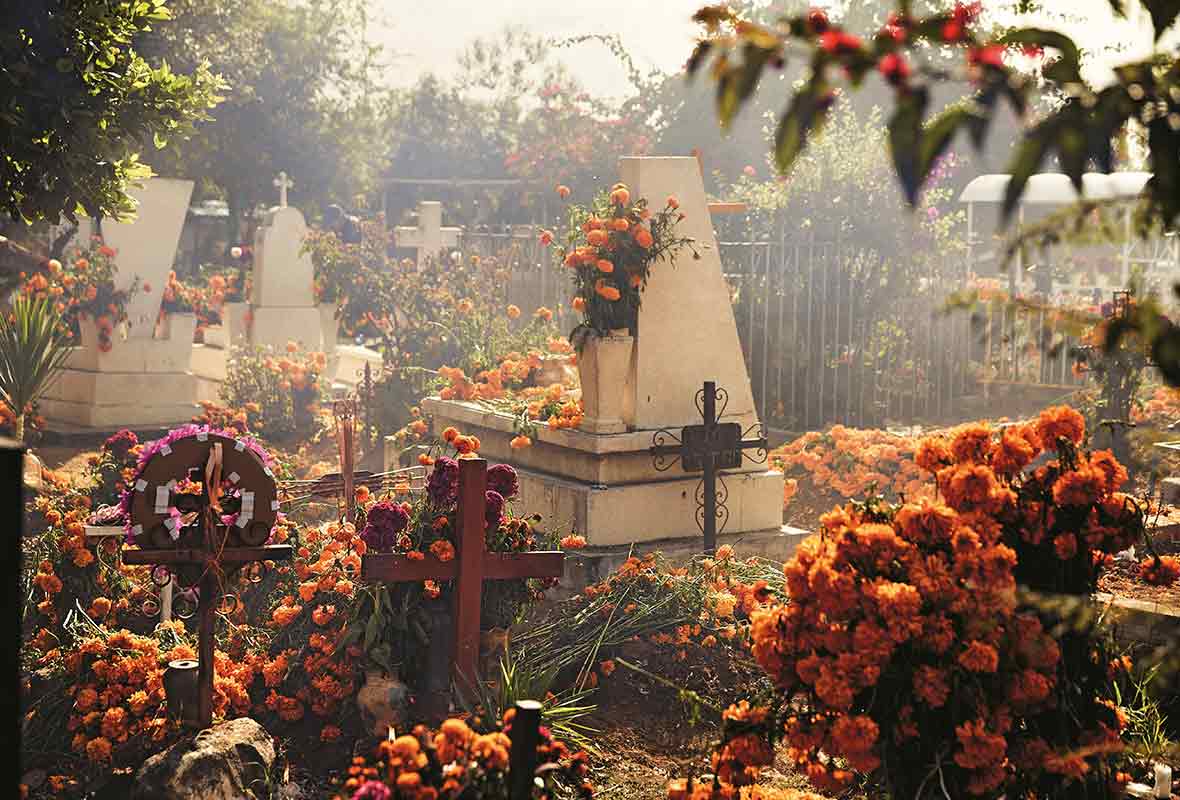 Day of the Dead. Dia de los Muertos. Whatever you call it, the Mexican day of remembrance, unlike our eerily unsettling Halloween and somber All Saints’ Day, is celebratory as heck. In fact, the day of graveyard revelry isn’t just a more tolerable approach to the inevitability of death, but a more life-affirming approach. And we’re pretty certain it’s not just the mezcal that’s responsible for this. We’ll drink to that. Originally published October 29, 2016.—Renee Schettler

It’s a Tuesday in early November and I’m sitting on my suitcase in Mexico City’s Aeropuerto Internacional waiting for my flight to be called. I try to focus on the last lines of Malcolm Lowry’s classic novel Under the Volcano, but the text gets blurred by all the thoughts that keep popping into my head. Because visiting Mexico is to get one’s head so stuffed with sights, sounds, and sensations that it feels like someone has tried to squeeze a sleeping bag into it. In the last few days, I’ve eaten more and better street food than anywhere in the world. I’ve eaten tacos, gorditas, and tlacoyos, grasshoppers, worms, and powdered ants. I’ve drunk micheladas and strolled around mercados as big as city districts. I’ve been offered mezcal by a grave in Oaxaca at midnight, have had fireworks explode no more than a fist’s distance away from my head, and seen zombie-painted adults scare three-year-olds with such relish that it would leave a Western child bedridden. I’ve seen marigolds in the shade of traffic cones and a donkey dragging a cart filled with sugar cane. I’ve made a pilgrimage to Frida Kahlo’s kitchen, drunk spirits that taste of chicken fillets, and eaten fruit that looked like lime but tasted like orange. I’ve had a visitation from the dead.

The tradition of Dia de los Muertos is thought to go back more than 3,000 years. When the Spanish conquistadors came to Mexico 500 years ago, they found the locals celebrating an ancient festival in which they seemed to challenge death. They ate, drank, partied, and carried skulls and pictures of the death goddess, Mictecacihuatl. They did their utmost to show they had the cojones to face up to death.

In contrast to the Christian Spaniards, the Native Americans regarded life as a dream and believed that you didn’t finally wake up until you died. And these old rituals didn’t quite vanish. Before long they had melded with the Catholic traditions, were assimilated with All Saints’ Day, and soon became Día de los Muertos. Today it’s the biggest religious festival in Mexico, or at least in the south, which is still characterized more by the Native American culture. On October 31st, they celebrate the Día de los angelitos, the day of the little angels. At midnight, the souls of dead children return to unite with their families for 24 hours. The next day it’s the adult relatives’ turn to return to earth, and on November 2nd all souls are allowed to return at the same time.

The fundamental idea behind the celebration is that the dead would be offended by being remembered with sadness and would rather have a party on their yearly return to earth. That’s why the dead are celebrated with food, music, mezcal, and all the other things that the late relatives enjoyed while still alive.

Altars, ofrendas, and homes are decorated and set up for a feast with mole negro, pan de muerto, home-ground chocolate, orange, lime, bananas, nuts, and incense. In the towns, they organize parades where people paint their faces like skulls–calaveras–and sit on relatives’ graves to eat, drink, laugh, and remember.

I am sitting in my hotel room waiting for it to get late enough to visit one of these graveyards when something strange occurs. I swear this is completely true. Exactly when the clock strikes midnight, just when the gates to the underworld open according to folklore, the door to my room suddenly flies open and an ice-cold gust of wind whips its way through the room and up my spine, only to quickly rush out again. Shaken, I down a glass of mezcal and go out onto the streets.

In the enormous Panteón General graveyard in central Oaxaca, it looks like a music festival directed by Tim Burton. Thousands of skeleton-painted people eat tacos and chicharrones from a street food stall, listen to mariachi music, and drink hot chocolate spiked with mezcal. By the graves, people sit and have picnics. The morning after, I visit a graveyard in one of the small Indian villages outside Oaxaca. Everywhere, small fires are smoldering where the grave candles have set alight the marigold bouquets that are piled by the graves, and there’s a smoky mist lingering over the whole place. Scattered around the graves are empty mezcal and tequila bottles, and beneath newspapers and pieces of cardboard, you can clearly see the outlines of sleeping bodies. Despite it looking more like a gang of grave robbers gone berserk than the aftermath of a religious festival, it’s incredibly beautiful. I think about how fundamentally different this attitude towards death is in comparison to that in the West.

I remember how terribly cold, stiff, and scary I thought it was when, as a child, I had to go to a graveyard and put flowers on a relative’s grave. I had to be completely quiet, collected, and solemn, and if I made the smallest of disturbances to the carefully raked gravel path, I immediately got an icy stare from one of my elderly relatives. I was so scared of doing anything inappropriate that I convinced myself that if I accidentally trod on a grave a mummified hand would burst from the ground and pull me down. The thought of death, on the whole, is something that our culture has rationalized away and that we do our best to avoid. But when we, from time to time, happen to catch a glimpse of it from the corner of our eyes, it leaves us paralyzed with fear.

During Día de los Muertos, on the other hand, you don’t deny the inevitable but face it head-on. “I’m not scared of you,” is what you say, and “I know you’ll come one day. But right now I’m alive and so I will eat, sing, and drink so much mezcal that I fall asleep next to the grave of someone who isn’t as lucky to be alive.” As a result, the knowledge that one day you will lie in the ground of a Mexican graveyard doesn’t feel cold, stiff, and scary—but beautiful, warm, and oddly appealing. If you grow up around here, I think you are less scared of death.

And, as a consequence, also less scared of life? I sit on my suitcase at Mexico City’s Aeropuerto Internacional and wait for my flight to be called. I think how strange it is when things that you thought would be life-changing actually turn out to be so. I feel a touch of fear of flying but think that when the inevitable happens, at last, all I have to do is to give a big smile and show my cojones. Then I board the plane.

Jonas Cramby is a food writer and restaurant critic for the Swedish newspaper Metro. He's also the creator of a popular food blog for the Swedish magazine Café. In 2009, he was named Columnist of the Year by the Swedish Magazine Publishers Association. Cramby is the author of Tex-Mex from Scratch.