Funfetti Chex mix. White chocolate puppy chow. Confetti cake muddy buddies. Cake batter Chex mix. Funfetti puppy chow. Whatever you call it, you best not be without the ingredients for it when a craving hits.

This funfetti Chex mix is simply crisp Chex cereal lavished with melted white chocolate and gilded with sprinkles. A crazy sweet indulgence guaranteed to satisfy the inner kid in all of us. It’s also the fastest party snack you’ll ever toss together—and also likely to be the fastest party snack to ever disappear.–Angie Zoobkoff 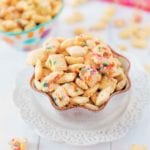 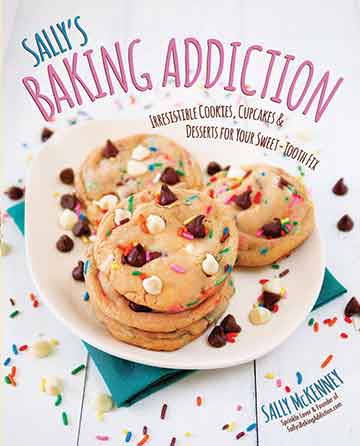 Holy sugar rush, Batman! I made this funfetti Chex mix at my in-laws’ place for an impromptu holiday gathering and, between the time I put it in the serving bowl and the time that nigh a crumb remained was maybe an hour? It was impossibly easy to put together. I ended up melting the white chocolate on the stove since my microwave is so unpredictable, and honestly it probably kept things a little cleaner in the long run. But that’s seriously the “hardest” part. The rest of the recipe is basically dumping everything together and giving it a good shake. The only criticism that was universal at the party was that it’s was a wee bit too sweet. I definitely think that it would have been better without the confectioners’ sugar since the cake mix and the white chocolate are plenty sweet on their own. No one thought this was “trashy” at all. If anything, I got the comment that this was a fun, festive, and cute take on classic Chex mix. I mean, it’s got sprinkles, for goodness sake! I’m already planning to make this again in smaller batches to top a birthday cake.

I’m not sure how much I actually like this funfetti Chex mix but I couldn’t exactly stop eating it! It’s a true guilty pleasure, I suppose. My kids loved it. I used yellow cake mix—not white—because that’s what I had on hand. I found even with the yellow cake mix that the finished recipe’s color was white. Once finished, the mixture kept for 3 days in an open Mason jar on my counter and stayed crisp the entire time. After that point, I couldn’t say how it would have fared. My kids cleaned it out!