I thought I’d send a quick note from Lisbon to say bom dia. I’m here for the month on a research trip for my cookbook, to be published by Clarkson Potter in 2009. I’ve rented an apartment on the upper reaches of Sé, a sliver of a zona that takes its name from the city’s famed Sé cathedral. Farther up the perilously steep hill, with its zigzag of stone steps, is the Castelo de São Jorge, the mighty fortress that once protected this part of the city. Every few minutes, below my window, I hear the eléctricos, early 20th-century trolleys, clattering their way through the tortuous streets of the old sections of the city. 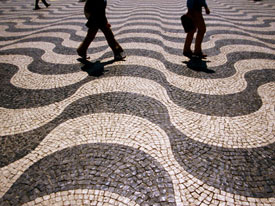 My days are divided between intensive Portuguese lessons (no, I can’t speak fluently, even though I grew up in a Portuguese-American home), writing and researching, and, when my friends are convinced I’m permanently fused to my chair, some fantastic meals — many made by them.

Being a café society, Lisbon offers lots of places to sip uma bica and people watch. One of my favorite spots is Nicola, the Art Deco coffeehouse that has been the haunt of Portuguese writers ever since the original was built in the 17th century. Lots of people call it a tourist trap — after all, it sits right on the impressive Rossio square with its famous black and white wave cobbled praça—but I’ve been able to sit there with my laptop for hours, nursing nothing but an água com gás or two, with not even so much as an evil glance my way from management. In fact, I’m writing this post from there. Not a bad way to spend an afternoon and 1,15 eiros. But if it’s excellent pastries and salgados (salty snacks) you want, wave over your waiter and ask for “a conta,” or the bill, and walk to A Brasileria, around the corner in Chiado. Which is exactly where I’m headed. Tchau.