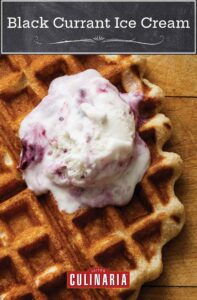 Black currant ice cream. It’s simply a swirl of slightly tart black currant jam swirled through a rich, creamy, unobtrusive sweet cream ice cream. Perfect on its own, in a waffle cone, or heck, even a la mode atop waffles.

This ice cream is sort of like the Italian classic fior di latte since this one doesn’t even include vanilla extract. We wanted a purer flavor for the jam. In the end, the taste here is all about the jam. Buy the best you can comfortably afford.–Mark Scarbrough and Bruce Weinstein

WHY IS POTATO STARCH USED IN ICE CREAM?

In the simplest terms, it’s a stabilizer. Cornstarch is commonly used but potato or rice starch are both great alternatives. And the reason for the stabilizer? This recipe has one big missing ingredient for ice cream—eggs. Without cooking egg yolks into the dairy and making a rich custard, your ice cream is going to be thin and melt faster than you’d like. Starches are used extensively in Italian gelato, giving them their recognizable texture. Ice cream without eggs will be a little lighter (because of the absence of fat from the yolks) but potato starch will still give you the creamy thickness that you desire. 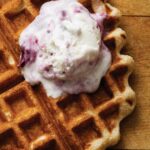 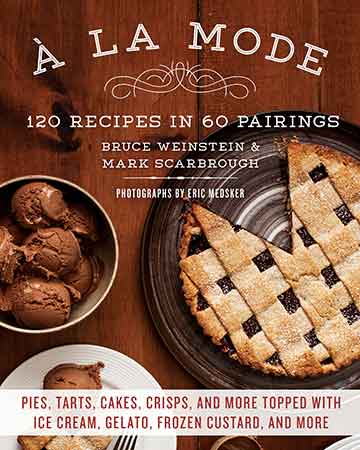 Make the ice cream base

Churn and set the ice cream

Summer trifle on a spoon. What’s remarkable about this black currant ice cream is the lovely vanilla flavor, even though there’s no actual vanilla in the recipe, and its compatibility with the black currant jam, which is worth searching for at stores.

The ice cream base comes together quickly and thickens nicely. I took a low and slow setting and I think when using a stabilizer like potato starch that’s a good idea. The sugar dissolves easily, especially using the finer baker’s sugar, and I turned up the heat a little after 6 to 8 minutes and whisked steadily until it thickened like a pudding or custard. You can help it chill faster (especially if you want to make it the same day) by cooling the “custard” in an ice bath before refrigerating it but a minimum of 4 hours in the fridge is still a good idea.

We exhibited patience while the churned ice cream set firm in the freezer. Okay, we got impatient and had some after 1 1/2 hours but I think it needed longer. I layered it in a rectangular 1.6-quart pan and froze it for 1 1/2 hours before serving. It was still a little soft but it scooped nicely. Better the next day, so I think you want several hours in the freezer before serving and let sit out a short while before scooping.

Using potato starch was a new one for me, and I think it was a completely neutral stabilizer, making this a pudding-like consistency, and the result is a non-icy ice cream that you can make at home with ordinary equipment. I think I might prefer it to using cornstarch, which I'm sometimes hesitant to use, partly because it seems too easily detectable and detracts from some recipes.

This recipe also encouraged me to try freezing ice cream in a low pan, which works much better for scooping, especially with the jammy add-in. I love that you can get this rich texture without eggs, which can overpower an ice cream with richness. This method also gives a good idea of how to proportion mix-ins. The only problem is that now I know how easy it is to scoop it out of an ice cream pan (which is how this container is going to be known). I bet this would be decadent on a waffle cone!

This black currant ice cream tastes (and feels) like really thick whipped cream with some jam. I refrigerated the mix for almost 24 hours and placed the plastic wrap directly on the mix after 1 hour in the fridge. I probably could have just covered the bowl with a lid.