Skip to content
Home » Writings » Getting a Life: Las Vegas Plus Meat, Meat, Meat
PinShareTweetYummlyShare on FlipboardEmailHeart this post 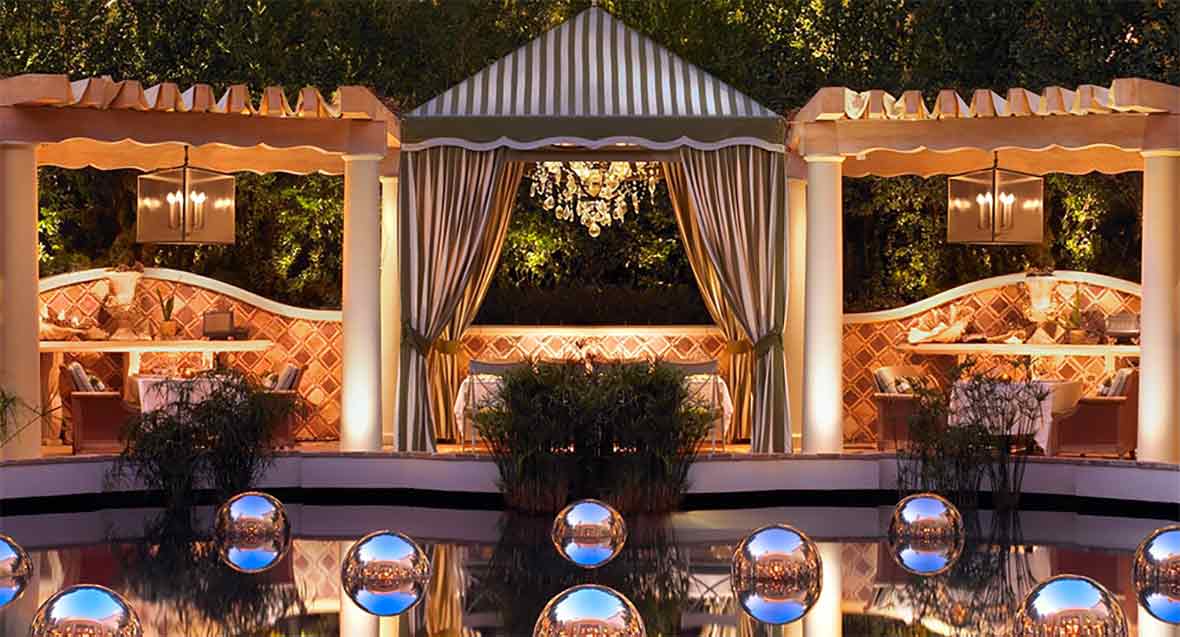 A few weeks ago, The One and I headed out to Vegas, Baby, for several days of fun, which is odd because I don’t gamble, don’t like crowds, and generally avoid anything remotely resembling sunshine. But the lure of stories of great meals kept tempting me like that crooked steam finger rising from a pie and pulling Tom (of Tom and Jerry) by his nostrils to the windowsill where it sat cooling. But It didn’t make much sense to travel all that way, and endure all those happy, shiny people, to eat the food of chefs who have flagship restaurants here in New York. A quick call to Barbara Fairchild, editor-in-chief of Bon Appetit set us straight, and we made reservations at Bartolotta.

Okay, sure, I’ve been known to use a superlative or six, but I have to say, without a doubt, it was one of the finest meals I’ve ever had. We had the luxury of sitting for four hours in a covered poolside cabana as it poured outside—a rarity on Vegas. During the deluge, manager Paul Slagle wheeled over the famous cart, which was loaded with fish from all over Italy. We were given a veritable aquatic tour of the fish kingdom, from invertebrates and vertebrates to jawed and jawless fish. The whole schlemiel. Daunted, we suggested Paul (Bartolotta) design a menu. The seams of my pants are still screaming, but what a combination. Click on the menu. 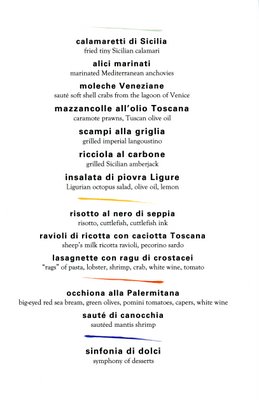 I’ve read restaurant reviews by food writers who swooned over this and mooned over that, penning deathless prose such as, “the corn tasted of the sun and of the wind that caressed its frizzle of corn silk,” and, “the cilantro had that thrilling green flavor that only comes from being picked at the exact dewy moment on the morn following the second full moon of the lunar cycle,” etc. And I’ve always thought it a bit excessive. That, or my ability for pleasure is tragically stunted. But when I bit into one of Bartolotta’s sheep’s milk ricotta ravioli, I’ve got to tell you, time stopped. You know that weird mind-bend sensation, like when you’re holding your breath too long and then suddenly gasp? That rush? That’s what I experienced. Give me a boxing ring filled with these little pillows of pleasure, and I’d happily risk going a round with the world heavyweight champ, Vitali Klitschko. They were that good. 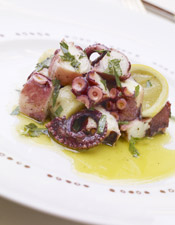 Ever thinking of you, I asked for the recipe to post here, and the restaurant dutifully complied. But to scale it down and simplify it for home cooks would take an engineering degree from MIT. And, frankly, my brain is still too fried to grapple with algebraic conversions. If you’d like it, though, drop me a line, and I’ll send it along.

The other courses, especially the calamari, prawns, octopus, squid-ink risotto, and sauteed mantis shrimp, were fantastic and, as is the hallmark of Bartolotta, blindingly fresh. When dessert rolled around, we were ready to be rolled out, yet we pressed on. The tasting menu had something like ten items, but by then my taste buds, on whose heartiness I had always prided myself, were waving a white flag. So, sadly, it was a blur of decadent sweetness and bright flavors. I was so sated and unsteady of gait that I forgot to ask for a tour of the kitchen, something, I’ve been told, is a masterpiece of precision. So until I return (and it would be worth the plane fare and hotel costs just to eat at Bartolotta again), fish from nearby Citarella on 75th and Broadway will have to do.

Closer to home, two colleagues from Portugal were in town recently, so we decided to hit Porcao Rio’s Churrascaria, on Park Ave. South. If you’ve never eaten rodizio-style–a Brazilian and Portuguese tradition–waiters with sword-length skewers laden with all kinds of grilled meats in one hand and an almost-as-big knife in the other circulate through the restaurant ready to serve. (Note to self: Next time don’t dash off to the bar so quickly with such sharp objects at the ready.) 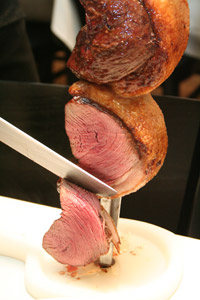 When you’re seated, hopefully with a caipirinha or a caipiroska (a caipirinha made with vodka instead of cachaca) in hand, you’re immediately met by a few petiscos, or nibbles. Then you’re instructed as to the rules. In front of each guest is a coaster: red on one side, green on the other. When you’re ready to eat (and all you can eat), you flip the coaster to the green side. Like NASCAR racing, when green flashes, all hell breaks loose. A phalanx of genial waiters suddenly descend, almost pleading with you to sample their wares. As delicacy isn’t my wont, I immediately started saying “yes” to linguica, “sim” to chicken, “absolutely” to turkey and salmon, while my amigos portugues waived off the servers. I attributed their light eating to their diminutive European frames. But when the filet mignon, the picanha (top sirloin or rump cover rubbed with sea salt and garlic), beef ribs, and carneiro (lamb chops) circled by our table later in the evening, they wasted no time in motioning for more, speaking Portuguese to the Brazilian waiters, making sure they knew not to travel too far in their dining room journeys.

As I felt my appetite start to wane, I asked for a new plate before it was too late and joined my friends in supping on the finest cuts of the evening. I couldn’t get enough of the garlicky picanha as well as the wine we ordered, Callabriga Reserva Douro Red 2005. Superb. I’d like to say I rounded out my meal with a trip to the salad bar, but, alas, I didn’t. None of us did, really. I, because I wanted as much room for the meat, my friends, because, well, vegetables tend to be something the Portuguese enjoy in soups, not by themselves.

Like at Bartollota, dessert came too late. We all had something out of curiosity, but I passed full about an hour earlier. If the Atkins diet is right, then I probably lost seven pounds because I certainly ate almost that much in pure, unadulterated, perfectly grilled protein. And on the way out, after I said goodbye to my dinner companions, I made a vow to eat nothing but salad for a week. That promise lasted all of 16 hours. Ah, well.