Mama often makes this noodle dish for lunch. The Cantonese like using spare amounts of Smithfield ham; its flavor resembles that of a famous ham from Yunnan province in China. But for such a small amount, I use prosciutto to save time.–Grace Young

These Cantonese noodles stir-fried with shiitakes, soy sauce, and sesame oil are umami at its weeknight best.

Mama’s Noodles with Mushrooms and Ham 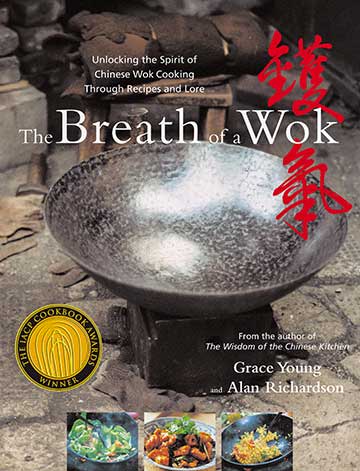 After eating Grace Young’s Mama’s Noodles with Mushrooms and Ham, my umami cravings were sated. I sometimes find it difficult to find good recipes using dried shiitakes, so I was pleased to find this.

We really enjoyed the crunch of the bean sprouts which, for some reason, are often absent from my grocery stores, so it was a treat. Though I regularly use mushroom “stock” in other things, I had not done so in a stir fry. It was a revelation.

The prosciutto was an interesting addition, too. In spite of the ginger, my first few bites were a little lackluster. The more I got into it, the more likable it became. By the end I was sad it was all over. My husband, finding it a bit dull, stirred in a bit of Sriracha sauce, which he exclaimed to really add more flavor.

However, next time I would be tempted to add more vegetables and a touch more sugar. The dish was simple and honest and had just the right amount of slurpiness factor to be satisfying.

I love how this dish met all my noodle cravings as well as an entirely satisfying balance of delicate ingredients and the lightness of a moist method that was just enough- enough salt, enough sauce, enough complexity, and the mushrooms were perfectly tender. I also was thrilled to have the rice noodles turn out just right – maybe the best result I have ever had. This all comes together in under an hour, making every bit of effort to assemble your mise en place worthwhile.

It was worth making sure I had the freshest mung beans I could find, bought the same afternoon, and the first thing I prep, so they could be well rinsed and drained (and you could pat them dry if necessary). Recently I have been choosing dried shiitake caps (no stems), and these were a bit smaller than I have seen before, so I added an extra one to make up for the bulk the stems would add to making broth, and the size of the caps. There was just over a half cup of soaking liquid, so I set aside the extra “just in case” (not needed after all).

To soak the noodles, I chose a long rectangular container which was about the same length as the folded dry noodles, and they were well covered in about 1 liter of warm water. Pliable but not completely soft after 25 minutes, I drained them, knowing they would get some additional time with liquid in the wok.

The whole dish was pretty much spot on to the recipe timing, and the only thing I was pondering after enjoying it was how much I wish I had some precious double smoked ham, or whether it would be fun to try some Jamón Ibérico or Serrano. I am pretty sure the answer will be YES! This is a delicate, Cantonese recipe, so there is not any ‘heat’ in the dish other than the ginger, and it was perfect for me (tho I will not fault anyone who can’t resist a bit of chile crisp or some special soy sauce at the table).