Portuguese salt cod hash, from Horatius Restaurant in San Francisco, is a rustic dish that combines salted dried cod with potatoes, onions, peppers, and black olives, before getting topped with a fried egg. Filling and simple to whip up, it’s easy to see why it’s so beloved.

There’s an old adage that says the Portuguese have one thousand ways to cook bacalhau, or salted dried cod. And few countries have such a passion for the fish. Bacalhau is one of the most important foods of maritime Portugal and has fed the nation for the past five hundred years. It all began when, following in the footsteps of the Vikings and then the Basques, Portuguese sailors travelled to the cool northern waters of the Grand Banks of Newfoundland, where cod was plentiful. There they would salt and dry the fish and bring the provisions home. This delicious recipe brings a modern twist to this classic ingredient.–Chef Antelmo Faria 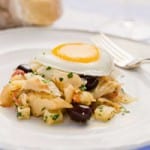 This is a traditional Portuguese dish that brings back memories of my mom. It's not only tasty but it's always a hit at parties. Plan ahead, because the salted cod needs to soak for 24 hours.
Prep 45 mins
Cook 30 mins
Total 1 hr 15 mins
Mains
Portuguese
4 servings
886 kcal
5 from 1 vote