This dish, called atascaburras recalls the classic French dish known as brandade, but made without milk. Here, it is served in a bowl and garnished with chopped walnuts and chopped hard-boiled eggs, with bread alongside, but you can also serve it spread on toasted bread and sprinkled with nuts.–Joyce Goldstein 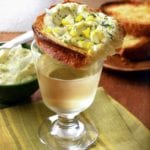 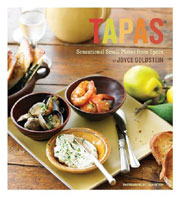 I love brandade and I love this Spanish salt cod and potato spread. The milk wasn’t missed at all. It was easier to make, incredibly creamy without being overly rich, with that wonderful salt-cod flavor teasing your taste buds but not taking over. It’s a wonderful appetizer. I felt it needed a little salt to enhance the salt-cod flavor, but all the other ingredients rounded out the texture and flavor.