This roasted turkey sandwich is one of our biggest sellers but, interestingly, each customer cites a different reason the sandwich is special. One says that she could eat the onion marmalade with a spoon for breakfast daily. Others can’t say enough about the bacon. Tom applauds Sisha’s decision to cut the turkey thicker, thus showcasing its moistness. This is an ensemble piece, with no clear headliner. While we use ciabatta, this sandwich would work as well on country bread, too.–Tom Colicchio with Sisha Ortúzar 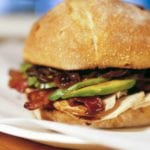 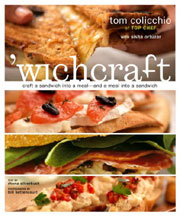 For the balsamic onion marmalade

For the turkey sandwich

Don’t cook the bacon over too high heat or the fat will burn. When you’re done, save the fat you’ve rendered and store it in the freezer. The next time you’re roasting some vegetables, toss some bacon fat in with them!

I have one word for this recipe: Awesome. I love the combined flavors of the sage-roasted turkey breast, onion marmalade, crispy bacon, and creamy avocado. A word of caution about the marmalade: If you taste this, you may not have enough left for the sandwiches. It’s delicious. I can’t find ciabatta rolls in my area, so I baked my own from Peter Reinhart’s Artisan Breads Everyday. We could hardly wait for the onions and turkey to finish cooking, as the smells in the house were making us drool. I wouldn’t change a thing about this recipe, and will be making it again and again.

What a hit this was. The aromas from roasting the turkey, sautéing the onions, and frying up the bacon filled the house and led to a very tasty sandwich. Don’t cut back on the onions, you’ll want to slather this marmalade all over the turkey, and enjoy the leftovers the next day. Next time, I will omit the mayonnaise, which I felt wasn’t necessary.

Absolute heaven on a bun! The aroma coming from the oven was fantastic. In one bite, you get the buttery flavor of the avocado, smoky flavor of the bacon, the sweetness from the onion marmalade, and the taste of fresh sage and turkey. The only boneless turkey breast we could find was a roast that was held together with mesh, but it worked well, and we were able to stuff the sage leaves throughout. We also didn’t remove the sage before serving, and instead thinly sliced the turkey as is. The only ciabatta rolls we could find were multi-grain, but it was a nice addition. We ended up with five servings instead of the four stated in the recipe, and it only took half of a sandwich to fill you up. All in all, this is a fairly economical recipe to serve. It’s easy to put together, and looks elegant on a plate.

There must have been a shortage of boneless turkey breasts in my area—it took seven grocery stores before I found one in a smallish size, fabricated as a roast with a nice mesh wrapping and a little pop-out “I’m ready” thermometer. I left the mesh wrapping in place, and stuffed the sage under the skin as best as I could. I cooked the turkey until it hit 158 degrees. With residual cooking, the final temp was around 168 degrees, rendering it overcooked and a little dry. I halved the onions and probably wouldn’t do that again—I fiddled too much, worrying about cook times due to the different volume of onions and liquid. I couldn’t find ciabatta rolls, so I used a ciabatta loaf, and just portioned it into the sandwich sizes we wanted. The ciabatta was the perfect texture for this combination. All in all, this is a really good recipe that would have been great with a couple of tweaks to my execution. Don’t overcook the turkey, go for all of the onions (they are worth it) and make sure your avocado is ripe. You will have a great sandwich.