This creamy potato and roasted garlic soup has a story behind it. My friend Jane is one of the people who has a standing invitation to come over for a casual bowl of soup and a glass of wine. One evening she called and said that she had met a new friend, an interesting Turkish writer who was visiting our valley on a writer’s retreat. “She’s so isolated,” said Jane, “up in the hills with no car, and she doesn’t know anyone here. Could I bring her with me for a bowl of soup?” “How about tonight?” I said. “I have a big pot of soup in the refrigerator.” Fifteen minutes later I got an e-mail. The lonely Turkish writer was fiercely allergic to onions, leeks, scallions, shallots, and green onions. Only garlic was all right. “I can’t imagine that any soup you have in the fridge doesn’t have one of those in it,” wrote Jane, her mournful tone seeping out of my computer screen. Too true. But I couldn’t get that poor woman out of my mind. Was it possible to make a tasty, savory soup with no onions, no leeks, no shallots? The rustic garlic soup I used to eat in Spain came back to me, and I started thinking about creamy potato and roasted garlic soup, about roasted garlic and sauteed garlic, about garlic soup served with garlic toasts. Here’s the creamy potato and roasted garlic soup I made for Alev, the lonely, onion-deprived Turkish writer: a creamy purée of roasted garlic with two kinds of potato, and floating in it dark green pieces of kale that had been sauteed with even more garlic.–Anna Thomas 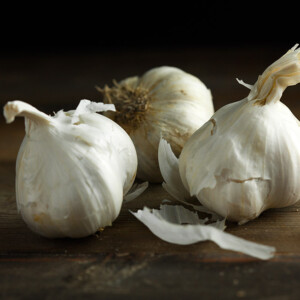 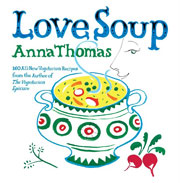 Add a little cream in place of some of the milk if you want a richer soup, or stir in some creamy goat cheese and let it melt into the soup just before serving.

This is one of those soups that should definitely be added to your repertoire. With such inexpensive ingredients, you create a soup that has complex flavors worthy of sharing with friends. Add the Parmesan cheese and the olive oil, and you’re set. This simple soup also has lots of options. Serve as is for a lovely vegetarian dish or reserve some of the diced potatoes to make it a chunky soup. Add clams, shrimp, crab or a good garlicky sausage and you’ve got a hearty dish to chase away winter chills. I’m sold.