Roasted sweet potato and Brussels sprouts hash is an easy one-bowl meal. Roasted vegetables, crisp bacon, maple cinnamon pecans, and creamy maple-Sriracha yogurt sauce are piled together, atop cooked grains if you’d like, and topped with a runny egg. Yum.

Sweet, salty, tangy, spicy, and satisfyingly rich. That pretty much sums up this unconventional jumble of roast sweet potatoes and Brussels sprouts, crisp bacon, maple cinnamon pecans, and a dreamy, creamy maple-Sriracha yogurt sauce. Slide on a runny egg as a final flourish and let yourself be transported. Tasting is believing.

Our unsolicited advice? Go with the optional addition of whole grains to make this a hearty brunch, lunch, or supper surprise. Cook up an extra batch of whole-grain anything and keep it at the ready in the fridge to take this hash to the next level.

And as for those maple cinnamon pecans? Long slow whistle. They’re trouble. Of the best kind. You’re going to find yourself wanting to keep a stash of those on hand at all times. Consider yourself warned.–Jenny Howard 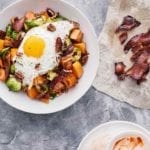 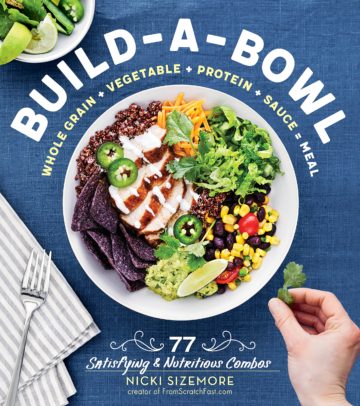 For the maple candied pecans

For the roasted vegetables

This may be my new go-to brunch recipe! I loved the combination of ingredients—it was warm, hearty, and filling. I served my veg, egg, and bacon over a bowl of quinoa. I topped mine with a fried egg. Heaven!

The maple-Sriracha yogurt is worth doing! When I tasted it on its own, I wasn’t overly impressed, but it actually brought everything together and I found myself adding more to my plate.

I would put the Brussels sprouts and sweet potatoes on separate sheets, otherwise they may be too crowded and end up steaming. I had to take my Brussels sprouts out of the oven at 30 mins, while my sweet potatoes needed another 5-10 mins. Next, put the bacon in the oven. (Cooking bacon in the oven is the only way! It’s so much easier and less messy!) Once the bacon comes out, bake the pecans. Mix up the yogurt while everything is in the oven.

Next time I make this dish, I will actually cook the quinoa and vegetable the day before. These bowls will come together incredibly fast for a weekend brunch (or even a quick weeknight dinner) if a few key ingredients are already cooked and just need to be warmed up.

I sure want to remember this recipe the next time I have leftover barley, rice, wheat berries, or other grain. While I made wheat berries for this recipe specifically, it is a great way to spice up something leftover into a new meal.

We served this for dinner and loved the flavor and texture combinations: spicy Sriracha in the yogurt added a kick to the sweet potatoes and slightly charred Brussel Sprouts (just as we love them). The nuts added a nice crunch. I poached the eggs and we let the yolk just run through the dish. This was certainly a winner for my husband and me.

This was our second “grain bowl” taste test (Roasted Winter Squash and Carrots with Miso Glaze was our first), and I’m happy to report another winner! We enjoyed the many layers of flavors and textures loaded on top of cooked barley, and found our modest-size bowls of this dish plenty satisfying without bacon.

In addition to the already-beloved sweet potatoes, Brussels sprouts, and maple-roasted pecans, we relished the spicy yogurt sauce and the rich yolks of sunny-side ups blended into the bowl. I quartered the Brussels sprouts (even though they weren’t very large) and they were slightly caramelized and fully cooked at the same time as the sweet potatoes.

On a side note, for our “appetizer,” we conducted our own sweet potato taste and texture test. I roasted the following varieties earlier, in addition to the 1 pound called for in the recipe: Garnet Yam, regular sweet potato, Japanese Murasaki, and Jersey White. The former two were wetter, more neutral in flavor, and cooked faster; the latter two were drier (could be diced without losing their shape), sweeter, and took about 5 more minutes to cook.

Throwing everything into a hot oven and preparing a zippy sauce is a great idea for a meal. This is an easy dinner, ready in about an hour. (We served the dish with wild rice, which takes longer than other grains to cook; with a different grain, the meal could be ready in 45 minutes.)

We topped each bowl with a poached egg. Two taste testers thought the flavors were just right. One thought everything was too sweet, and suggested omitting the maple, while one thought the maple flavor, especially in the sauce, was important.

All-in-all, a simple and handy recipe, and we will try again.

And, we had plenty of the sweet-salty pecans left over. They’re very good on ice cream.

I have to admit to cheating and making the components of this that suited our holiday meal and the diners participating, but it was a success with those pieces, and barely made it to leftovers (the maple cinnamon pecans did not).

The pecans could stand on their own as an appetizer or at-home bar-type snack, which is why they didn’t make it to leftovers. The maple-Sriracha yogurt leftovers were a terrific dip for vegetables. I went on the heavy side for the Sriracha and the light side for the maple syrup.

Since we were serving non-pork eaters and folks who really don’t eat eggs, we omitted both, and therefore created a terrific vegetable side from this main dish recipe.

I was especially drawn to this dish for the maple pecans and roasted sweet potatoes and Brussels sprouts. As you would expect the roasted veggies with the maple-cinnamon glazed pecans were incredible, but what I didn’t expect to love was the maple-Sriracha yogurt. The sweet-heat-tang of this sauce was totally addictive!

I served the veggies and glazed pecans for dinner as a side for roasted pork tenderloin, so I didn’t use the bacon, grains, or eggs. I put a dollop of the sauce on my plate to smear on a bite of my pork to see how it would taste, and by the time I kept dolloping additional sauce on my plate, I had eaten half the sauce myself! I didn’t have Sriracha on hand so used cayenne pepper instead, and this obviously didn’t hurt the overall results.

The veggies will easily serve 6 people as a side, so I’m reheating my leftover veggies in the oven today for lunch and will be serving them over quinoa with additional yogurt sauce. This is an excellent and very versatile dish, and one I will be repeating often!

This dish is bitter, sweet, sour, spicy, soft, and crisp, flavors and textures that perfectly combine to transform a classic side dish of Brussels sprouts and sweet potatoes with maple syrup into a main course. I prefer the vegetarian version, without the bacon, only with the egg as a protein. The pecans at the top, crunchy and aromatic, are a fundamental element, as is the slightly spicy yogurt sauce.