This grilled cheese with peppers is not your typical cheese sammie. It’s an unconventional yet still comforting version stuffed with three types of cheese and an attention-grabbing pepper-onion mixture along with some mustard, pepper jelly, and Parmesan crust.

This unexpected grilled cheese with peppers is pretty much grilled cheese for those of us who get a little anxious when we don’t have a bottle of hot sauce within reach. It’s layered with three types (THREE!) of cheese, sauteed peppers and onions, pepper jelly, and, just to keep things interesting, a crisp and rich Parmesan crust. It’s gonna elbow out your standard grilled cheese as your go-to comfort food fix.–Angie Zoobkoff 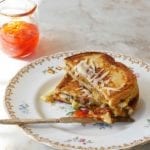 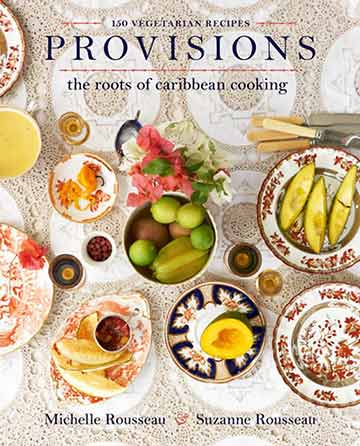 *What Type Of Skillet Should I Use?

You may be accustomed to using your nonstick skillet for grilled cheese sandwiches. And you can continue to use that. We prefer not to use nonstick skillets for a lot of reasons and instead reach for a seasoned cast-iron skillet, which is also nonstick. If you don’t have either, go ahead and reach for a regular skillet but you’ll need to use a little more butter than usual to try to discourage the bread from sticking.

You know those movie reviews when the reviewer says “Thumbs up. Way up!”? That was everyone’s reaction to these cheese sandwiches. We all agreed that these were the best grilled cheese sandwiches we’d ever had.

When putting them together, I thought the brush of mustard would be too light but it was just enough to give you a nice mustard taste. The onions added great flavor and nice texture and the blend of cheeses was spot on, providing the stringiness that’s a hallmark of any good grilled cheese. I would have maybe added a little more spicy pepper jelly but having it on the side was fine. And the bread was exactly right for these sandwiches—a sturdy bread that can handle the stuffing.

The one gripe I have is I would have dropped the ginger and pepper in toward the end rather than at the beginning because they were basically cooked to a crisp by the time the onions were done. But this is a minor issues when stacked up against an amazing (and easy) grilled cheese!

I really enjoyed this recipe and thought that it was quite easy to make and a nice twist on a regular grilled cheese.

I’m not a fan of Gruyere cheese, however, I found it quite enjoyable in this sandwich. It made for the perfect lunch.

I used a Tuscan white loaf and cut it into slices and it worked out really well. I wasn’t able to find Provolone to grate, only round slices so it took a round slice per sandwich.

I thought the amount of jelly in the sandwich was just enough, however, I did put the jelly on the side as per the recipe and my significant other loved that as he could put more on as he ate it.

This made 4 perfect sandwiches.

I’m a firm believer that grilled cheese is never a bad idea. The combo of cheeses in this recipe is truly superb and the peppers add a nice bite. It’s the perfect solution to a cold day when you just need to Netflix and chill.

What a great twist on a classic grilled cheese. It’s a bit time-consuming compared to a “regular” grilled cheese, but the time is well spent and worth the effort.

In reality, this is a cheesy onion and pepper sandwich. Other than the fantastic flavors, the cheese also serves to keep everything else in the bread. I’m not a big fan of melting the butter in the pan and then placing the bread on it. I prefer to spread butter to very edges of the bread to make sure it’s 100% covered but that’s personal preference. This process worked OK but I don’t think one teaspoon of butter is enough to melt in the pan and then expect 100% coverage to brown the bread. I had some spots that weren’t properly buttered.

The other side had much better color once complete. I did not smash the bread down with the spatula while cooking, I wasn’t trying to make a panini. Under the broiler, using the Parmesan cheese, it took less than 2 minutes to brown and melt the cheese.