This miso-glazed tofu recipe douses extra-firm tofu with an umami-rich miso and hot sauce glaze and bakes it until golden. Excellent served either straight from the oven or cold from the fridge.

Tofu just got quite a lot less boring. This oven-baked, miso-glazed tofu rendition douses extra-firm tofu with a slightly spicy, umami-rich glaze and bakes it until the edges are crisped and the center is puffed and the taste is enticing through and through, whether straight from the oven or cold the next day for lunch.–Angie Zoobkoff 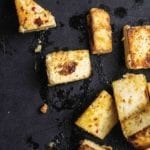 This miso-glazed tofu recipe douses extra-firm tofu with an umami-rich miso and hot sauce glaze and bakes it until golden. Excellent served either straight from the oven or cold from the fridge.
Prep 15 mins
Cook 30 mins
Total 45 mins
Mains
Asian
4 to 6 servings
244 kcal
5 / 2 votes
Print Recipe 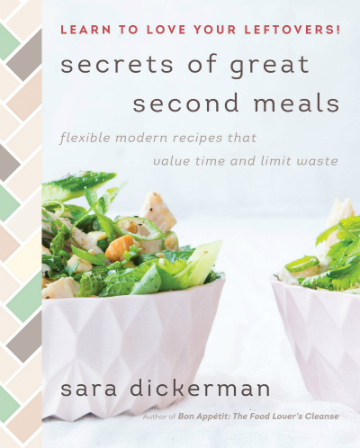 I love tofu and eat it several times per month. It’s a great protein source that typically picks up whatever flavor is coating it.

I liked the roasting method of this recipe. The tofu puffed up nicely and formed a good crust. Compared to the frying method, it was very nice to not spend many minutes frying it in a skillet and then cleaning up all of the inevitable oil splatter.

I would at least double the sauce. While the amount specified was enough to coat it, it wasn’t enough to sufficiently flavor it. I was generous with the Sriracha but the flavor was not spicy enough. We did add extra salt and pepper while eating to lift the flavor. (Truth be told, my husband pulled out a bacon and beer jam that I had made and spread a bit of that on the tofu!)

This surprisingly substantial meatless dish was flavorful and very satisfying. I did need to add an extra tablespoon of water to better coat the tofu and opted to broil it for about 2 minutes to brown it a little. Paired with some vegetable fried rice, this made for a filling meatless comfort food dish we will no doubt repeat.

This super simple method is so easy to put together. The subtle yet satisfying flavor it delivers is a weeknight bonus. The balance between the umami-rich sweetness of miso and the heat was very nice yet approachable without being too fiery. (Although I made this with a Sriracha-miso blend, I look forward to trying it with the clear flavor of Crystal hot sauce next time.)

While you’re pressing your tofu, you can preheat the oven, whisk together the sauce, and decide what you want to serve along with it. I used made a half recipe to serve just 2 people and had a little extra marinade to brush on when I turned the tofu after 10 to 12 minutes. It was really nicely browned and crisp and slightly puffy. When I took it out of the oven, I had time to prepare some quinoa and made a complete meal with the tofu topping freshly prepared chickpeas, fresh cherry tomatoes (the deep mahogany coloured ones that you can get almost year round now), and a bit of preserved lemon. A very satisfying meal.

I did save a few pieces for the next day, and even after being chilled, the tofu had a chewy, firm bite that was munchable and snackable (and gluten-free, if that’s helpful).

A simple enough recipe that you could prepare this in any minimal kitchen even while on the road.

Being familiar with the cuisine of western Japan, where gently flavored dishes are preferred, I embrace the use of white miso on tofu in this recipe. (Sweet white miso is more widely used than sharper red miso there.) But if subtlety isn’t your thing, you may want to use red miso and up the amount of hot sauce. You could also make more sauce and brush the extra on the tofu before broiling as miso gets punchier when charred a bit.

We enjoyed this roasted tofu with a salad of super-flash blanched (I’m talking 15 seconds) sugar snap peas and mushroom soup for a delicious healthful dinner. The only thing I will change next time is the draining method. It was more cumbersome than my usual method, which is to take off the plastic cover of the container, remove the water, then stand up the tofu on its side in the now-empty container and leave it for at least 15 minutes. Water drains out of the tofu naturally and no towels or plates to wash.

This useful miso-glazed tofu recipe transforms plain extra-firm tofu into ready-to-use pieces that can be helpful as the protein base for a meal or as an easy protein-rich snack. The combination of miso and hot sauce creates a flavor that doesn’t pinpoint a specific country, ethnicity, or cuisine, which adds to its user-friendly nature.

Right out of the oven, the puffy crispness is an appealing texture and the browned tofu is more visually appealing than the white tofu that went into the oven. After refrigerating, it loses the crispness but retains the brown color.

My roasted tofu was much darker brown than in the photo, which was appealing to me. They were very much browner despite not broiling. When I went to flip them at the halfway point, I was concerned they might have gotten too dark, but they weren’t. They can get pretty dark and I’d recommend nor being afraid of letting them darken as it enhances their flavor. That being said, my batch would have been blackened had I used the broiler after baking.

I speared them with a fork as soon as they were cool enough to eat but wanted to save enough to see what happened as they cooled.

Besides eating it straight off a fork, you could add it to a salad or top it on a salad, add it to a stir fry, stuff it into a pita, spear it and dip it; it would be good with noodles or rice, and, if made a little smaller, could be served atop soup, such as miso, as a garnish. Sliced differently, it could go into a sandwich, on a crusty roll, and, in that case, I’d slather it with mustard. Also, smaller, it could go into tacos, in which case, the additional hot sauce would be extra appropriate.