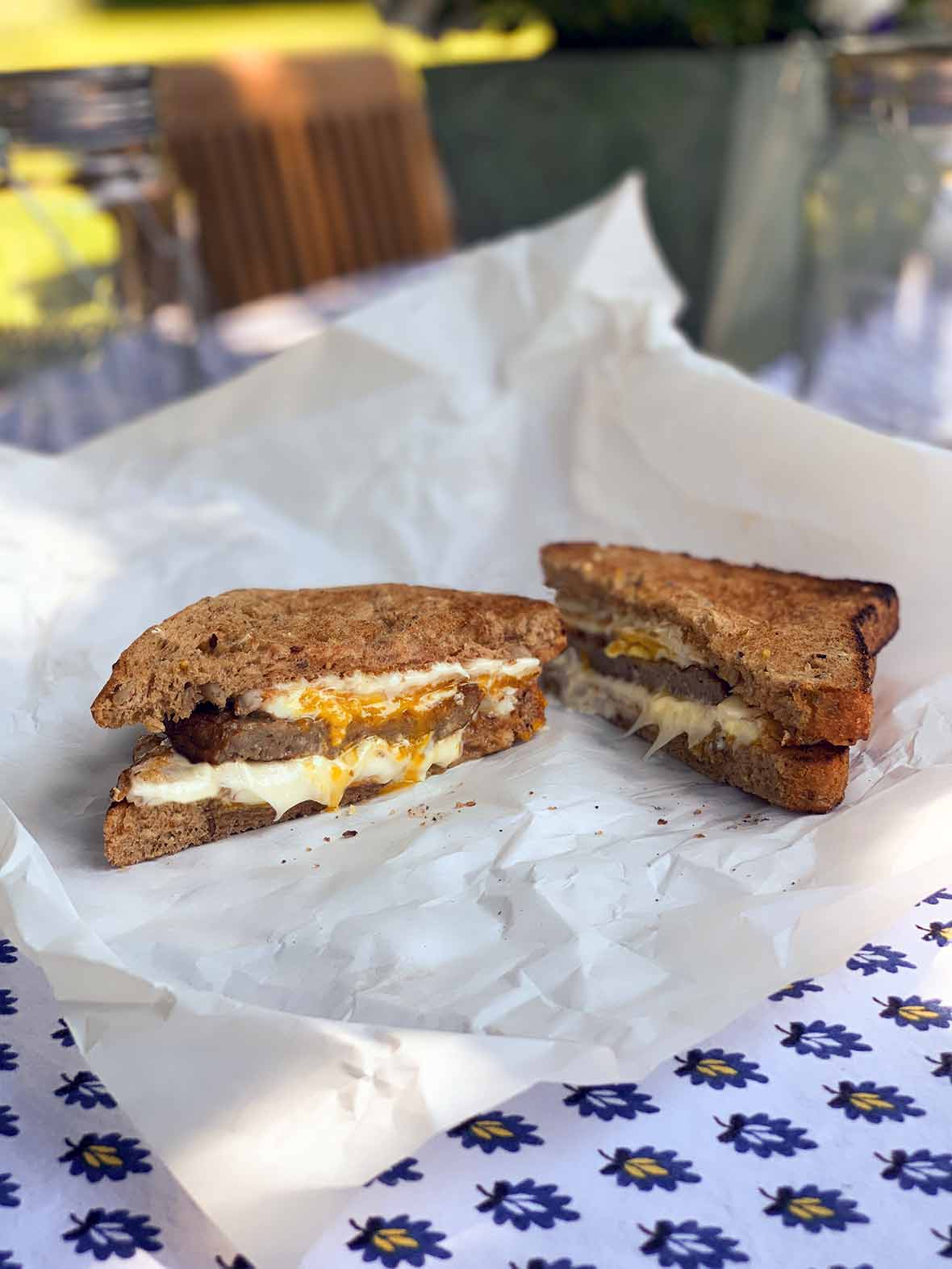 My takeout breakfast order was simple. Two eggs, sausage, and Cheddar on toasted multigrain with salt and pepper. Apparently, though, to the twenty-something behind the cash register, it proved anything but simple.

“So, that’s one egg–,” she repeated, distracted by a conversation of her coworkers, all about her age.

“Oops! Two eggs, sausage, Cheddar–,” she said the word with a lilt in her voice to show me she was listening. “On a roll.”

“No. Salt and pepper, please.”

“Got it. Two eggs, sausage, Cheddar, salt and pepper on toasted multigrain.” Then she swiveled the credit card reader toward me and let her finger linger where it asks if I would like to leave a tip.

For what? For getting every item wrong in my sandwich? A sandwich so simple even a purse-size comfort dog could have done better? What really left me shaking my head, though, was that she was astonishingly ignorant of her ineptitude. And, if that weren’t enough agita for a Sunday morning, she wanted to be rewarded for it!

I suddenly saw her as a fourth-grader, running into the house with a quiz fluttering in her hand. As her parents notice the huge red D+ on the page, they applaud her and put it up on the refrigerator, a rainbow-colored unicorn magnet clinking it in place.

It doesn’t matter that she was (hopelessly) wrong in her answers, they explain to her. What matters is she had the gumption to take the quiz–and gumption deserves a reward. “How about ice cream, honey?” Or, their mouths forming into delighted O’s as they dream up the perfect show of love, “A trip to Walt Disney World and a stay in Cinderella Castle’s private suite?” Because what else could explain her cluelessness in tapping the tip button for a job poorly done?! 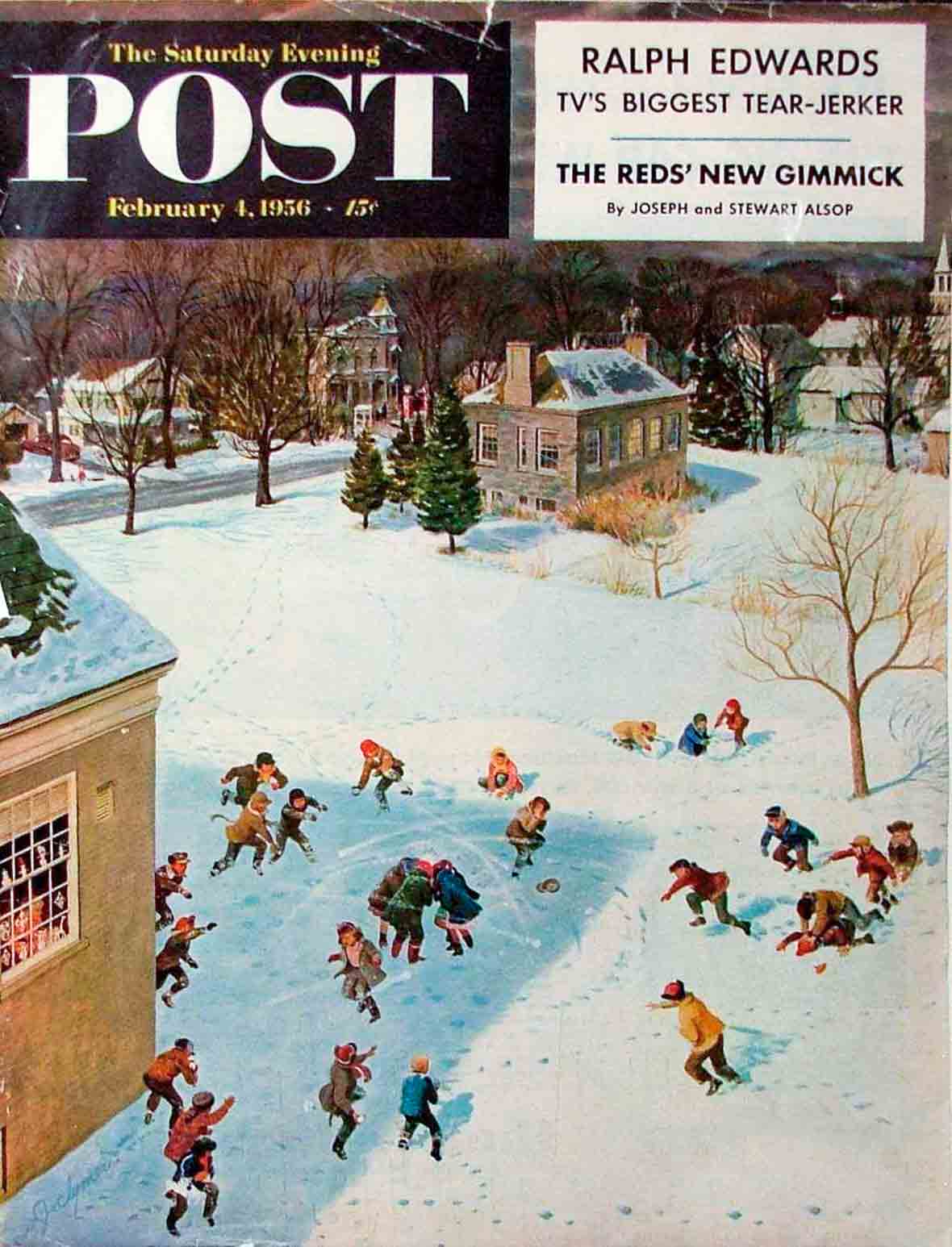 Then, the coup de grâce. I said, “thank you,” as was drilled into my head by Momma Leite lest I suffer a slap to the back of  the head so hard her wedding band could raise welts, to which this creature chirped back the response that defines her generation: “No problem!”

No problem? NO PROBLEM? If you had heard me, young lady, instead of having one ear cocked listening to the gossip your friends were trading in, you’d understand that, yes, indeed there was a problem. A giant problem: You just don’t give a damn about what you do.

Now, I’m not talking about a hardened, angry teen here, who had, by unfortunate circumstance, become jaded before she even knew the meaning of the word. No, I’m talking about one of the privileged summer help at the Bridgewater General Store, in Bridgewater, Connecticut. A town so charming it hurts your eyes. A town so picturesque that artist John Clymer simply had to immortalize its elementary school and town green on the cover of the Saturday Evening Post. (And, not surprisingly, it looks exactly as it did 33 years ago.)

If this were an isolated incident, a fluke, an outlier, I could write it off as nothing more than particularly graceless incompetence and perhaps a bad case of the aforementioned silly parenting. But more and more I find myself invisible, unheard, and ignored by a multitude of young people at checkouts, in stores, behind desks. Some carry on with colleagues barely acknowledging me–or, worse, treat me as if I were an interloper on their conversations. Others rarely look up from computers and cellphones, simply responding to my questions with a point of a finger or a shrug and a murmur to ask someone else. Still others treat me as an affront to their very selves by my simply engaging them in what they were hired to do.

Yes, I realize this does beg certain questions. Is my age showing? And, now that I’m on the other side of The Continental Generation Divide, have I lost touch with what it was like to be a young adult? The answer to both is an adamant hell, no!

I’ve held down jobs when I was less than half her age. The first was a newspaper route at age 10, which my parents demanded I do. Then a summer-farmhand position at 13, again, something my parents insisted upon. “It builds character,” my mother had said, as she put away groceries ignoring my dramatic and wet sobs of protest. Later was an after-school office boy/copy boy job at The Spectator, a local newspaper, a job that I had gotten for myself and kept until college.

With each of them, I expected nothing of anyone, other than a paycheck. I expected to ride my bike to deliver papers in all weather except snow. (Thankfully, there were no mail-carrier positions for children, lest my parents sign me up for that, too.) I expected to have wrecked hands, poison ivy covering half my ass (there were no port-a-potties on the farm, so we had to relieve ourselves in the woods), and near sunstroke in the middle of August. I expected to have my writing ripped to shreds and be told to return to my desk and not even think of resubmitting the article until it was perfect. And all the while, the words sir, ma’am, and miss appended my speech.

I can practically hear the collective Millenial gasp at this, as well as murmurs of child endangerment lawsuits. But hear this, you young’uns: I survived. I survived nicely, thank you very much. (Sure, I’ve been in therapy practically all my life, but that’s another essay for another time. But if you want to get a head start, you can read all about it in my memoir, Notes on a Banana.)

Along the way, I’ve learned a few invaluable lessons:

1. I have to work for what I want. And work hard. Nothing will be given to me because I’m sweetly, remarkably, uniquely me.

2.  I’m neurotic about excellence. The idea of failing or displeasing someone is incomprehensible. Stick with it until it works. And…

3. There are indeed winners and losers in this world, and you don’t get a gold star just for showing up. That shit stopped in kindergarten for me. 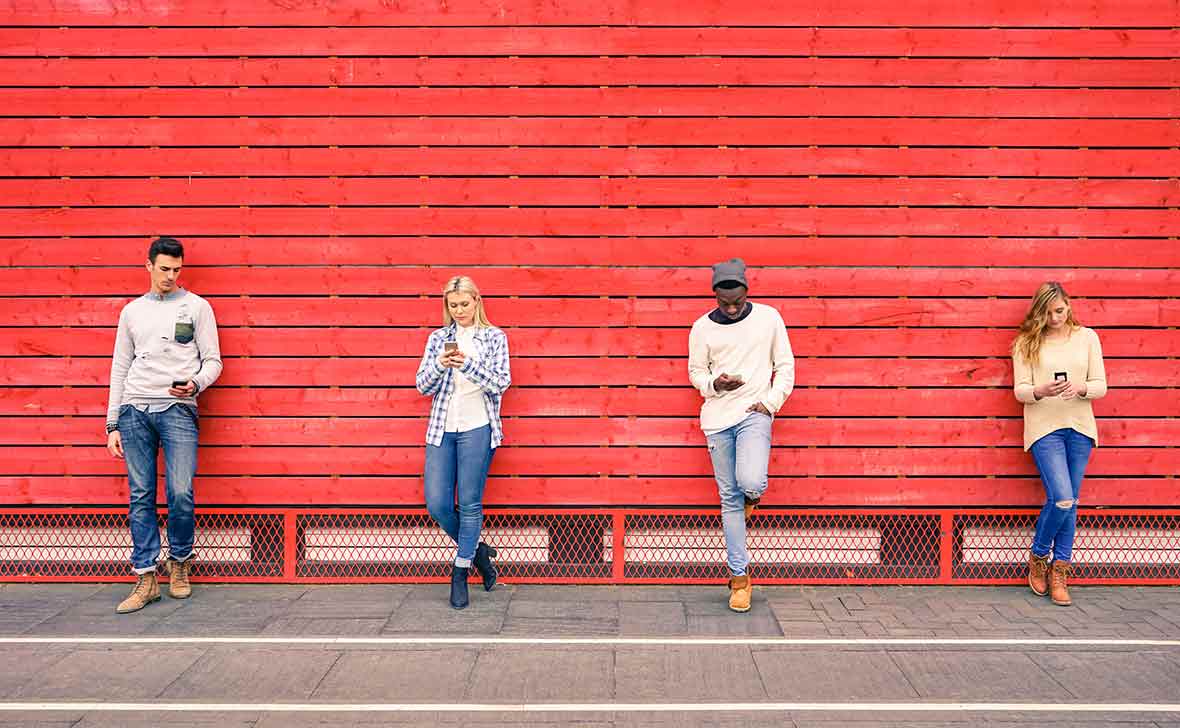 What concerns me deeply about this generation that came out of the womb blank-eyed and texting 60 words a minute is the future. Not so much my future. The day Millenials are running countries and corporations, The One and I will be in a nursing home wiping tapioca pudding off each others’ chins while watching re-re-reruns of “Three’s Company.”  No, it’s the future of the children of Millenials I worry about. What kind of world will be thrust upon them by their parents? Will they be equipped to deal, compete, and thrive? Will America still be able to compete? I must say I’m buoyed by the barely-millennial presidential candidate Pete Buttigieg. Besides being adorable and gay, he seems to have flouted the qualities that stereotype his generation. If Mayor Pete is out there working for a better future for us all, there must be other young folks who are doing the same, whether they’re freshman lawyers, environmentally woke sous chefs, or kickass summer help who know how to show up and do their job well. And that gives me hope.

But back to matters closer to home. When I unwrapped my sandwich at the table on the back patio, what did I find? One egg, sausage, two slices of American cheese, a squeeze of ketchup, no salt or pepper on whole-grain toast.

No problem, as these kids say nowadays. I’ll just make breakfast at home from now on. At least The One still listens to me.

Update: What a Difference a Week Makes

Oh, the taste of humble pie. This past weekend five of us went to Constantine’s, a restaurant in nearby Woodbury, CT. It’s a small family (and family-run) place, the sort of place where you need to reserve the prime rib in advance as it’s extremely popular. Our friend Susan reserved three orders. (She actually drove there the day before to make sure that our orders were secure.) Within minutes of sitting down, we were asked if one of the prime-rib lovers would be willing to forfeit his/her meal, as someone else in her section had ordered it and there was a mix-up. “Not this crowd,” we said, laughing. All three are avowed beefeaters. We all thought the request felt a bit weird. But we ignored it.

First, our appetizers were served but to only one of us. We waited a bit and, eventually, the rest received theirs. I was irritated but said nothing; I wasn’t the host of this dinner.

Second, when it came to the main course, I got mine a good five minutes before the others, and when theirs finally arrived our waiter auctioned them off: “So, who gets the moussaka? The souvlaki? The prime rib? ”

I got really pissed off but said nothing.

Then we discovered the chef suddenly and “unfortunately miscounted,” and only two prime ribs arrived but cut into three portions. Susan—the woman who drove there and back to assure her guests got prime rib and who is the biggest beefeater of us all—was served one thin slice of meat. I’m talking maybe one-quarter inch thick. The One and our friend Fred had a half portion each. I was livid. Not with the waiter but the chef/owner, who was in his 50s–three decades beyond the millennial age that I groused about above. In that moment, I despised the bad management and staggered delivery of dishes to the table and his executive decision to make three meals out of two—after we made it clear we had three hungry carnivores at the table.

On top of it, the manner in which he handled it made the waiter, who was a twenty-something, take all the heat. The poor guy kept repeating, “I’m just the messenger!” to the volley of justifiable complaints from Susan. But what I fumed about most was the chef/owner never coming to the table to talk to us, explain, and apologize.

That’s when it hit me: It’s not so much millennials I have an issue with. (Although I still can get rankled by things young folks do.) It’s bad customer service I despise. I simply can’t abide by it. It takes nothing to be present, kind, and thoughtful to paying customers. I’m a service fanatic. My mother was in service all her life, and I watched how she treated people. As a former waiter, I was trained by the staff at Windows on the World as well as chef Jean-Georges Vongerichten on giving excellent service, knowing how to make paying guests/customers feel special and welcome, and going above and beyond in the inevitable difficult situation.

So, to those who took offense at my post above, my sincerest apologies. Clearly, I wasn’t focused and thoughtful enough in my piece on what really rankles: bad service. Mea culpa.