These kimchi arancini are a Korean-inspired riff on an Italian classic. Fried rice with kimchi is stuffed with mozzarella, deep-fried until golden and served with a spicy gochujang sour cream.

These deep-fried orbs of kimchi arancini with their inner melty, cheesy gooeyness are pretty much guaranteed to bring you happiness no matter what else is going on in your life. An absolutely brilliant Korean riff on the classic Italian fried risotto snack with an unexpected chile heat.–Jenny Howard 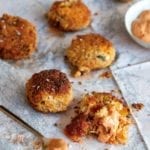 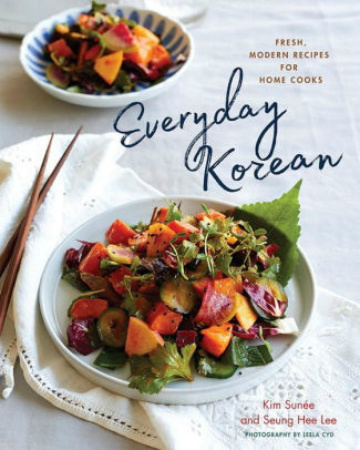 For the gochujang sour cream

For the kimchi arancini

*What Are Gochujang And Gochugaru?

Gochujang and gochugaru are popular Korean spice products and can be found easily in most Asian markets, some larger grocery stores, and of course, online. Gochujang exhibits a subtle but complex flavor profile of smoke, spice, and slight sweetness and is a thick, fermented paste that usually comes in small, rectangular tubs. For the gochujang sour cream recipe here, you could also substitute an alternate Asian chili paste, such as chili garlic sauce, starting with a smaller measurement and adding more, to taste. Gochugaru is a coarse chili powder with a texture similar to crushed red pepper flakes.

This Korean inspired version of arancini is simply fantastic. The addition of kimchi to the rice was genius and completely elevated the dish without overwhelming it. Both of my children declared it a 10!

Forming and coating the arancini worked well though I wouldn’t fiddle too much with them as they can break apart easily. It was much easier to mold the ball shape once they were coated in the bread crumbs. I shallow-fried the arancini and the timing was accurate at 4 minutes. The mozzarella was very melty (and oh-so-delicious!).

I needed about 2 cups of oil to fit my 12″” cast iron skillet. I cooked the arancini in 2 batches for ease of managing them but I think they all could have fit in one layer.

I intended to serve them with the gochujang sour cream, but when I what I thought was a jar of gochujang in my fridge was something else entirely, so I substituted 2 tablespoons chile garlic sauce in place of the gochujang and this was a pleasantly spicy condiment that went well with the arancini. The arancini were not particularly spicy on their own.

These delicious morsels of goodness make me so happy. And they made everyone who tried them happy. The kimchi fried rice is enough to evoke an out-of-body experience on its own. But bread it, stick a hunk of gooeyness in the middle, and then deep fry it? Fugetaboutit.

I deep-fried them in batches using 1 quart oil in a large pot.

I will definitely be making these beauties again. 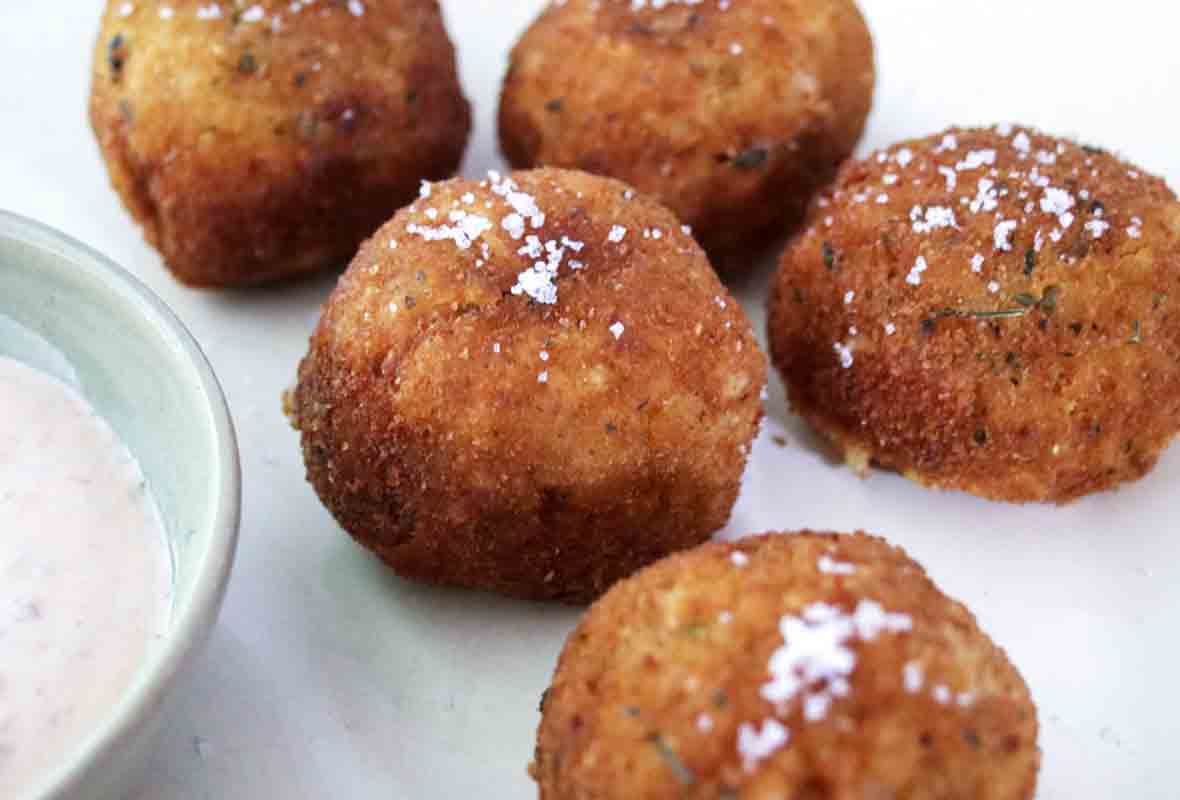 There are a lot of parts here, and the whole is greater than the sum of its parts, so stay with this! We went the wholly homemade route, so this could be a whole lot easier and quicker if you purchased some of the parts; however, I’m going to walk through this with our approach.

We made a homemade kimchi. The recipe stated it could be eaten right away, but would optimize at 3 weeks. So, if you’re going all out with the homemade approach, this would be the best place to start. Due to dietary considerations, we made a terrific vegan kimchi.

Since the gochujang sour cream can be stored in the refrigerator for up to 1 week, make this anytime. We loved this sauce, so I suggest making a double batch and using it the leftovers as a chip dip, if you’re so inclined. I’m not usually a chip and dip person, but this breaks that rule for me.

While the recipe stated to use leftover kimchi fried rice, this is not necessary. This can be freshly made. There will be rice leftovers! The rice is delicious and was sensational scrambled with an egg later that week.

Back to the arancini assembly. Despite having completely dry hands and a dusting with a little flour, this was a very messy process, though you would never know it from the results. The balls were not only not perfect as noted in the recipe, but they wanted to fall apart. Fear not and continue on!

We deep-fried. Not being expert deep fryers, we had a hard time keeping the oil hot enough, which, again, you would not be able to ascertain from the results. While we had the previously noted troubles getting the arancini to hold together during assembly, they did stay together pretty well during the deep frying.

We were both surprised and impressed by how nicely crispy the arancini got! I have learned that the paper towel approach can cause lovely fried goods to turn oily and soggy, so we used a cooling rack. We used the seasoning with cheese suggestion as the Arancini came out of the fryer, and served them as an appetizer, plated and then with the dish of gochujang sour cream passed.

There were no leftovers when served as an appetizer to 4 people. 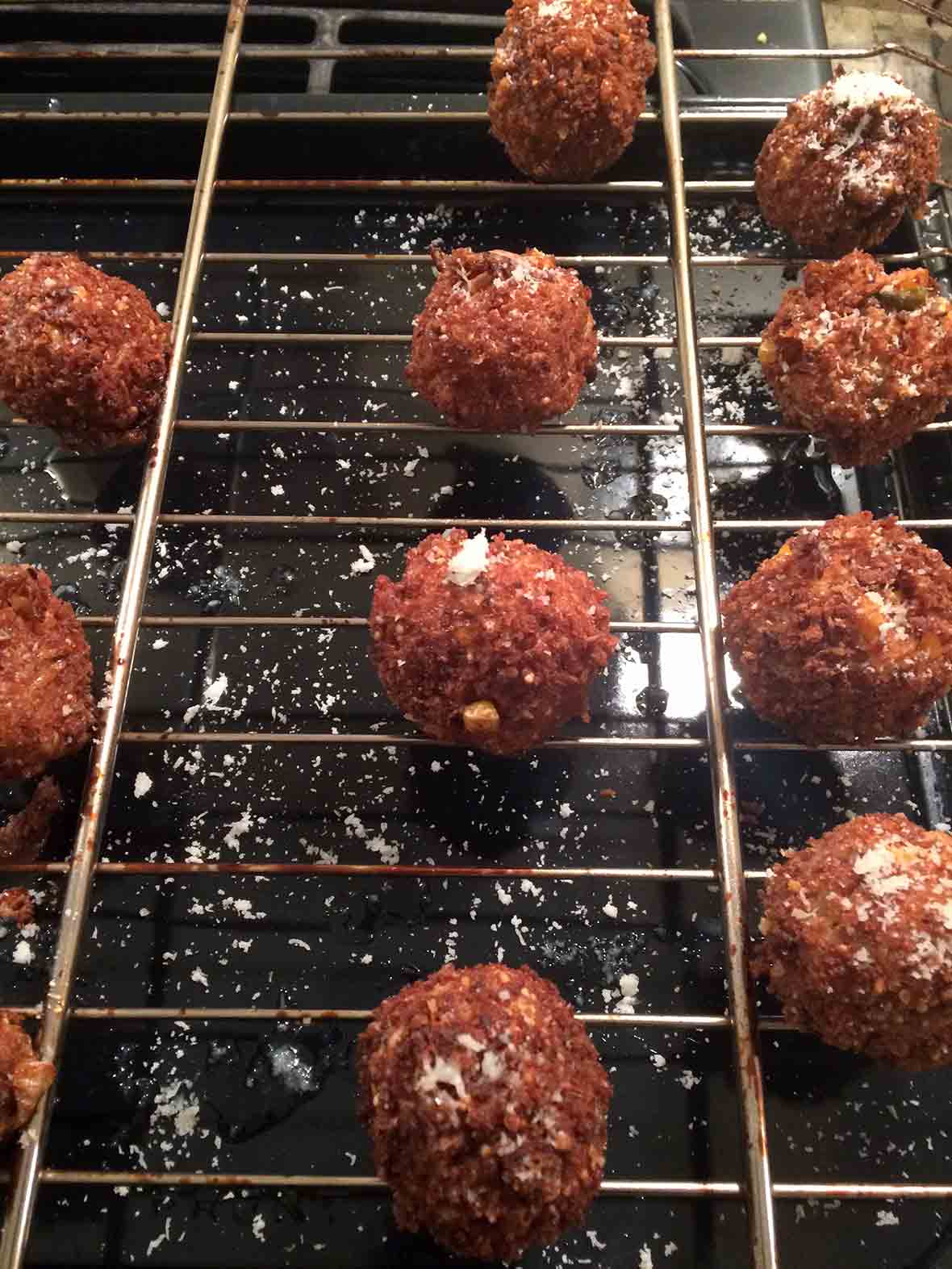