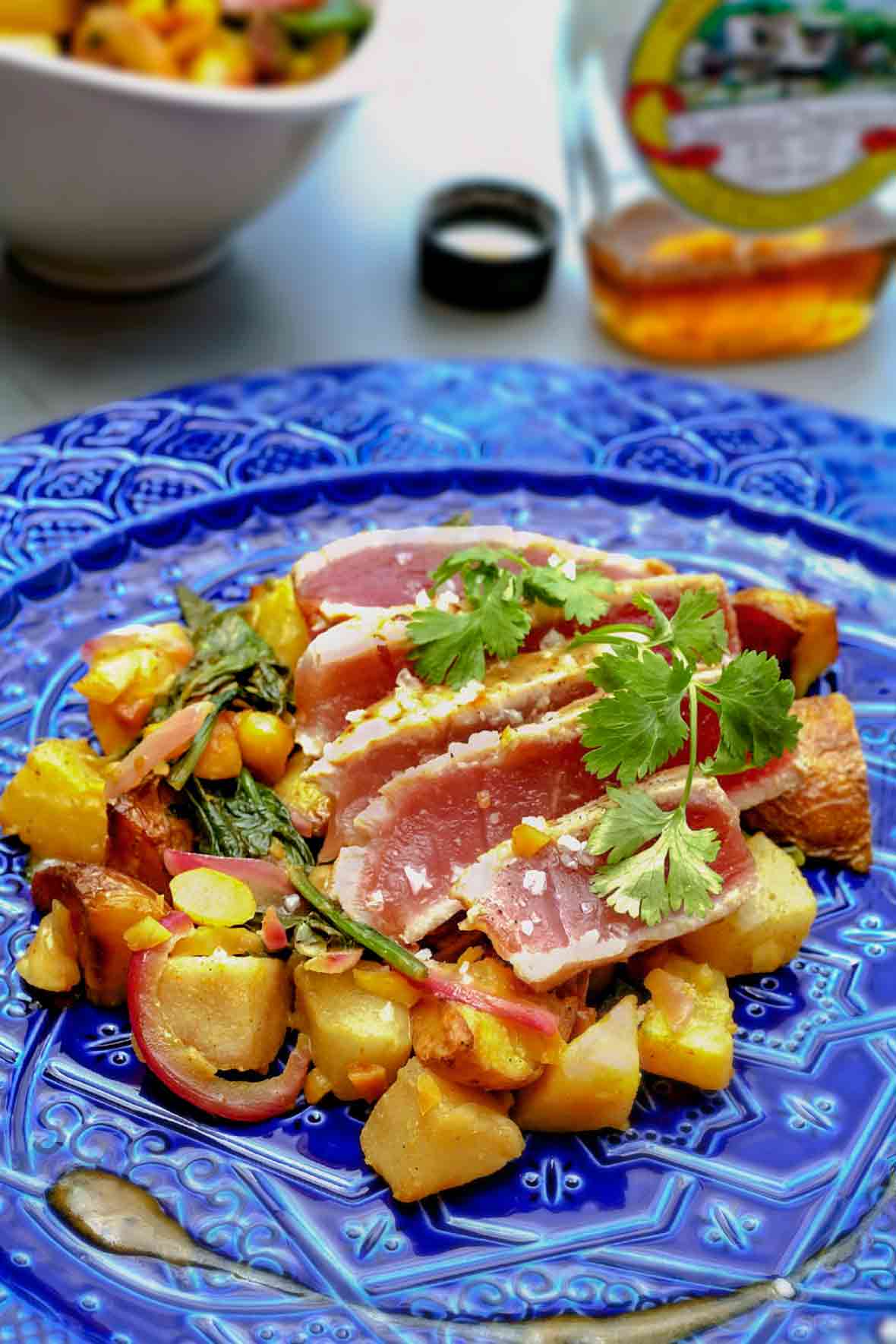 I met twelve-year-old Frank Liranzo when I was teaching a kids’ cooking class at the YMCA’s environmental camp in Huguenot, New York. The kids learned how to tap trees to make maple syrup, a process I’d read about but never seen in action. Frank was one of the campers, and he got to experience firsthand the old art of making maple syrup. “You put tubes into the trees so the sap flows out,” he says. “When it first comes out of the tree, it tastes like sugary water. Then we went to the sugar shack where we saw the sap boiled down until it tasted like syrup.” At the camp, I made this Maple-Glazed Tuna with Pear-Potato Salad for the kids. “I thought it would taste really sugary, but it didn’t,” Frank told me. “First I tasted the tuna, then a hint of mustard, and then an aftertaste of the maple syrup.” I love how the maple syrup adds sweetness and a beautiful caramelized crust to the meaty tuna steaks, while the sweetness of the pears in the accompanying potato salad balances nicely with the glazed tuna.–Marcus Samuelsson

Make the pear-potato salad
Heat the olive oil in a large saute pan over medium heat. Add the potatoes and saute until golden, about 12 minutes. Add the pears, onion, garlic, almonds, and curry powder and saute for 5 minutes. Remove from the heat and season with salt and pepper. Toss with the lemon juice and spinach.
Make the maple-glazed tuna
Whisk together the mustard, maple syrup, lime juice, and 1 tablespoon of the olive oil. Set aside.
Season the tuna on both sides with salt and pepper. Heat the remaining 3 tablespoons olive oil in a large cast-iron skillet over high heat. Add the tuna and cook for 30 seconds on each side.
Remove from the pan and brush both sides of the tuna with the maple syrup-mustard glaze. Transfer to a serving platter and garnish with the cilantro. Serve with the pear-potato salad.
Print Recipe

For this recipe, I used Ahi tuna and Bartlett pears. This was a great weeknight dinner, I got it on the table in about 30 minutes and it was easy to cut in half for just two servings. We enjoyed the blend of savory and sweet with the curry, and it was a nice change to serve with the tuna. The hot cast-iron skillet was perfect for searing. For rare tuna, make sure you do only cook for 30 seconds on each side.