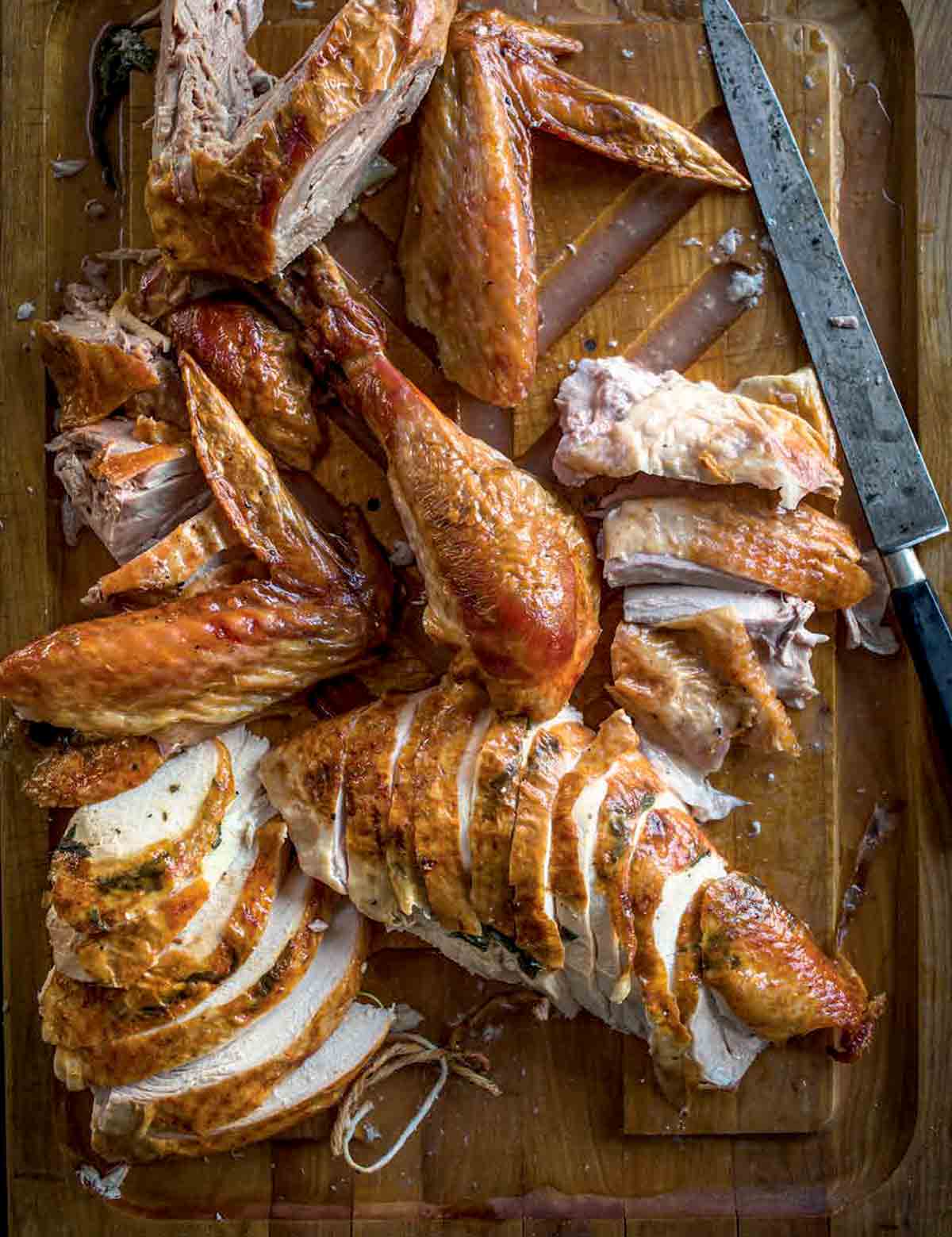 Does your family stand clear when you’re toting the carving knife on Thanksgiving day? Perhaps frightened by that frustrated look in your eye? You’re not alone. So many of us can knock out a killer bird—all golden brown and glistening—but then we stand slack-jawed in front of it when it comes time to carve. This video, from our a partner site Fine Cooking, shows you how to carve a bird without having to reach for the first aid kit.–David Leite

Nikki Sizemore: Whether you carve your turkey at your Thanksgiving table or in the kitchen before dinner, there’s a right and a wrong way of doing it. You want to carve the meat against the grain for maximum tenderness, and you want to follow the shape of the muscle so you don’t waste any meat. In this video, I’ll show you how to carve a turkey, plus a quick shortcut if you’re doing it in the kitchen.

Before you start carving, you want to make sure that your knife is nice and sharp. The type of knife you use will depend on your preference, but a knife with a long, thin blade like this will give you a little bit more dexterity than a big chef’s knife. Now, the first step is to carve off the legs. I’m just going to face the turkey towards me, and using my knife, I’m going to cut through the skin that connects the leg to the body. You can see that nice crispy skin and the herbs that we’ve put underneath the skin to add lots of extra flavor. 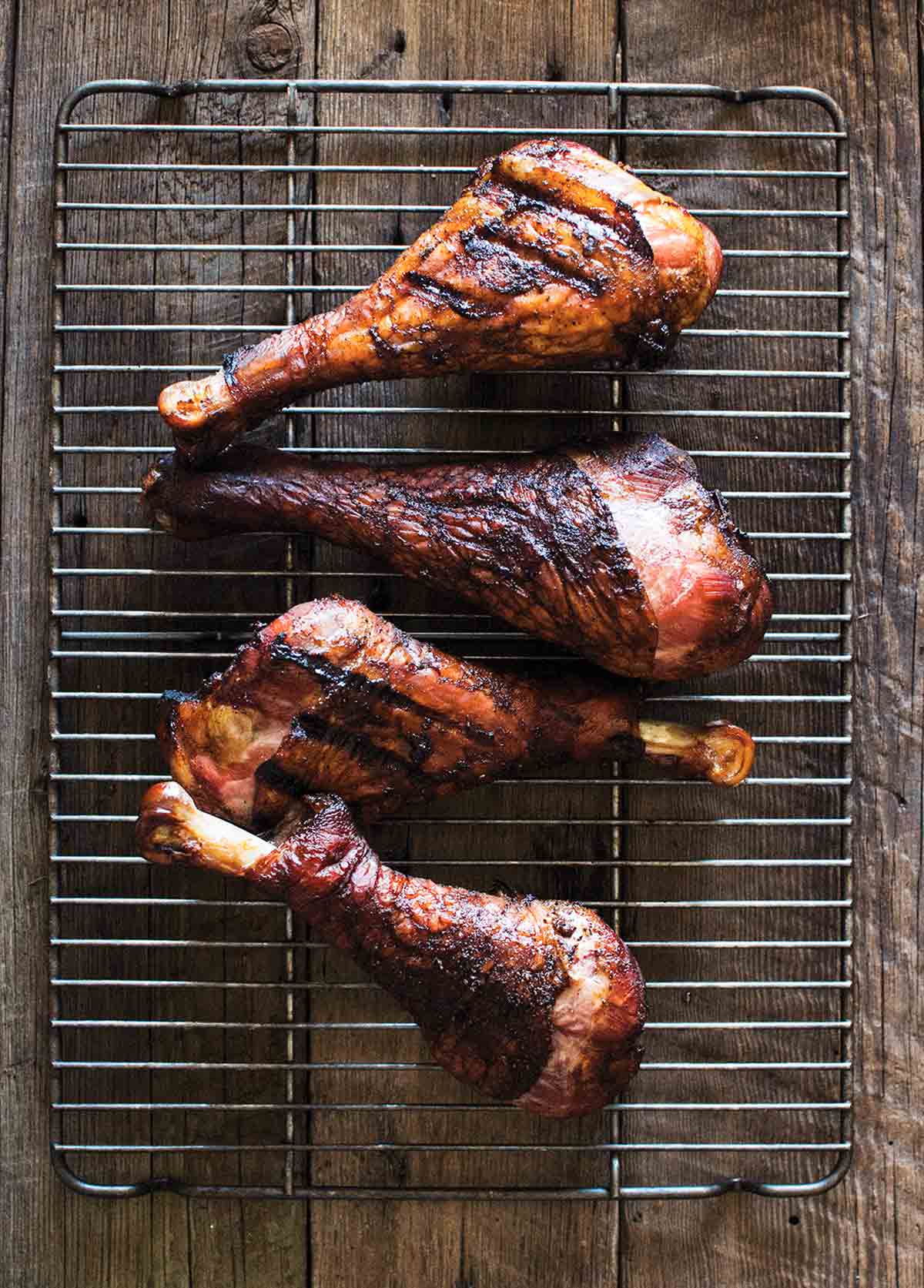 So now, this turkey rested for 40 minutes. So it’s cool enough for me to handle with my hands, which makes things a little bit easier. So I find it’s easiest to just pop this leg out from the body. Now, what you’re looking for is the joint that connects the leg to the body. So just probe around in here with the tip of your knife. And when you find it, there won’t be much resistance. It should be pretty easy to cut through. Now, when you’re carving the leg, you also want to try to carve off the oyster, which is a really tender morsel of meat located above the joint on the backside. And then, just remove the leg in one piece.

The next step is to separate the drumstick from the thigh. Now, I like to do this skin side down, actually. It makes it a little bit easier to see what you’re doing. So just probe around. Again, you’re looking for the joint that connects the thigh to the drumstick. And when you find the joint, just cut through. And again, there shouldn’t be much resistance.

Now, to carve the thigh meat, we’re going to carve in the same direction as the bone. So you can see the bone runs from this direction, down here. So we’re going to cut parallel slices. Now, I actually like to remove the skin and cut it up separately, then add it back to the platter after I cut the thigh meat. This just makes things easier. Otherwise, it tends to slip around while you’re carving the thigh.

So just start carving slices right parallel to the bone. And I’m just using the fork to hold the meat. Try not to poke the meat too much. Just hold it in place. Now you can just transfer the thigh meat to your serving platter. And you can put that crispy skin right on top. Now, you can either carve the drumstick in the same way or you can just serve it whole on your platter. Now that I’ve done one leg, I’m going to go back in and do the exact same thing to the other leg. 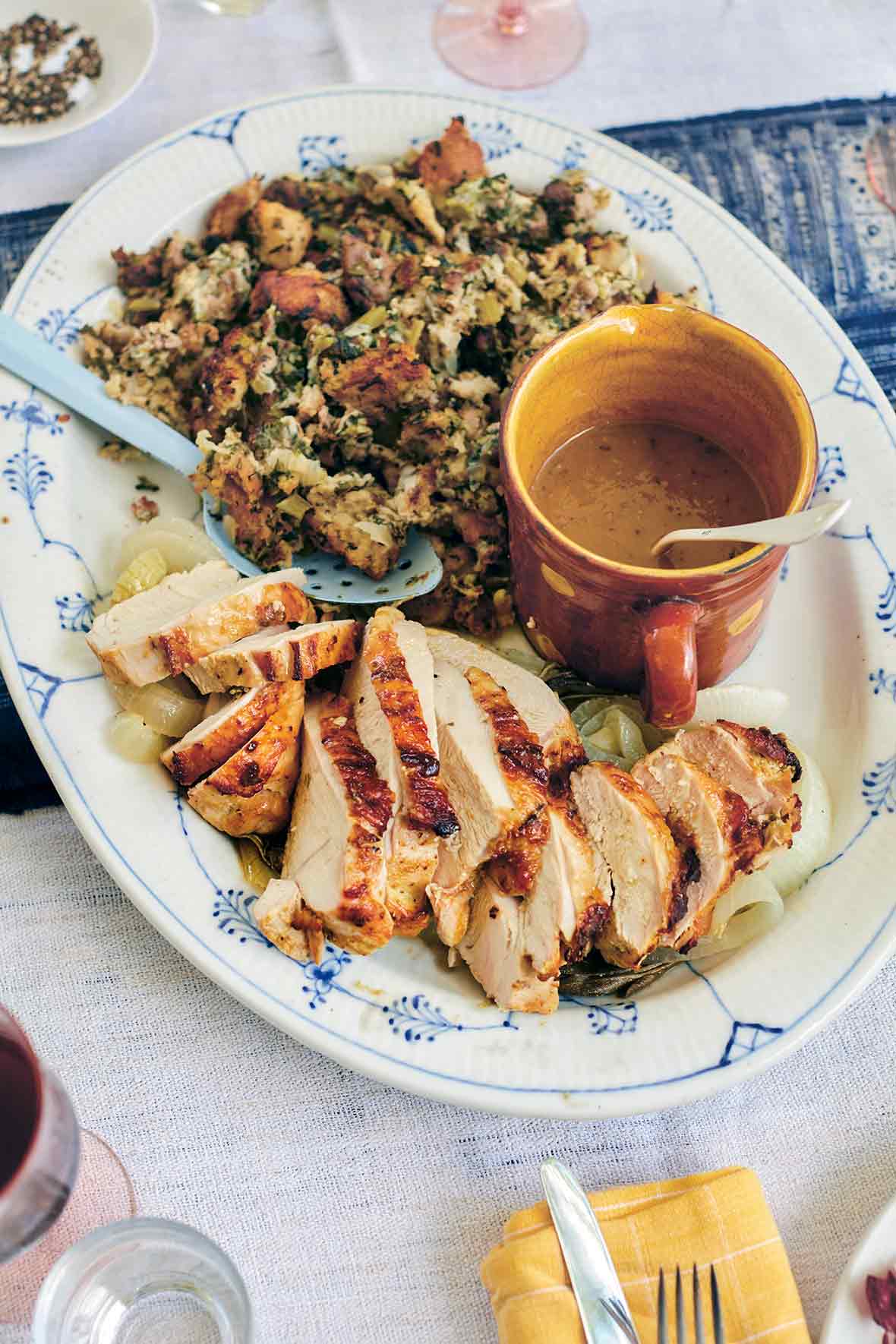 Now for the breast meat. And there’s two ways you can go about doing this. If you’re carving your turkey tableside, it’s nice to cut slices off the breast bone directly. So to do that, you’re first going to run your knife right along the breast bone and cut straight down until you hit the ribs. Now at this point, turn your knife parallel to the board and cut slices in this direction. Now, by cutting the breasts this way, we’re cutting against the grain of the meat, meaning we’re going to have really tender slices. And you just want to keep going down until you remove all of the breast meat. And you do the exact same thing on the other side.

However, if you’re carving the turkey in the kitchen, it’s even easier to remove the entire breast half and then cut it into slices. Now to do that, I’m going to start in the same way, just cutting straight down along the breastbone. Now, once you get the rib cage, just turn the knife out, follow the shape and keep cutting the meat away from the bones until the entire breast half is removed. I find it’s easiest to use my hand at this point, and you are doing this in the kitchen, and that way you can pull back the meat and really see what you’re doing. Now at this point, just cut the meat crosswise into slices. Each of these slices will be really tender, and best of all, they’ll each have a piece of this really crispy brown skin. Once the breast meat is sliced, just place on your platter.

Now, the last thing to remove are the wings, and I’m going to do this in the same way that I did the legs. Just find that joint and then just remove the wing in one piece. Now, the wings have a lot of connective tissue in them, so it’s not really worth it to try to carve the meat off the bone. What I like to do is just to cut them into pieces at each joint. And of there’s room, you just add these to your platter.

And there you have it. That’s how you carve a whole turkey into tenders slices without a lot of waste. Pass the gravy.