This fig and prosciutto flatbread takes the classic pairing of sweet fig jam, salty prosciutto, and tangy goat cheese and delivers it atop crisp baked bread. An easy and elegant appetizer, lunch, or simple supper that’s even more satisfying with a glass of wine.

You’ll want to stash a slice of this fig and prosciutto flatbread aside before guests arrive because this appetizer (or, even better, lunch with a glass of wine) takes the traditional duo of sweet figs and salty cured meat to lofty and laudable levels. We’re a little sheepish to refer to it as a recipe as it’s just something you toss together at the last moment without care as to exact measurements. Yet what results it always incredibly inspired.–Angie Zoobkoff 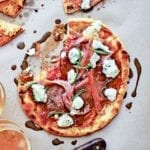 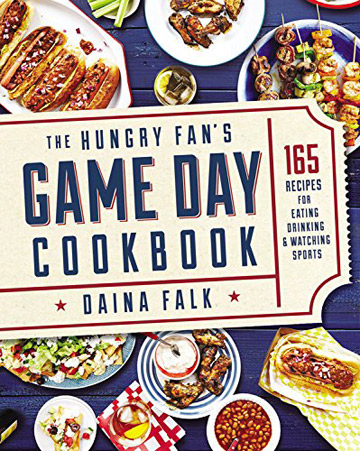 This is a quick recipe to throw together and it’s delicious! I made this with store-bought flatbread. I couldn’t find 12-inch ones, so I bought smaller ones instead and divided the ingredients between 4 flatbreads rather than 2 flatbreads.

I found the store-bought flatbread a bit too soft for my liking. I decided to divide the flatbreads and did up 2 as per the recipe and the other 2 with a couple of tweaks.

It’s delicious but found that I would have wanted a bit more jam.

I can’t afford to vacation in Italy this year (or any other year, for that matter), but speak to me of figs, prosciutto, and goat cheese and my fantasy life in Italy kicks in.

This turned out to be a remarkably easy recipe. Just 5 minutes of prep and 5 minutes under the broiler and the result was a tasty, attractive appetizer. The sweetness of the fig jam served as a foil for the saltiness of the prosciutto and the creaminess of the goat cheese tied it all together.

As an individual pizza served on the back deck with a bottle of wine while overlooking the wild grapes in my yard and dreaming of a vineyard in Tuscany, it served two. Fantasies are meant to be shared.

In the interest of complete disclosure, the fig jam was from England, the goat cheese was from the US and the flatbread contained Greek yogurt. The prosciutto, however, was imported from Italy.

For me, this is a recipe without a recipe, or not a recipe, or whatever title folks are giving things like this right now. I used 6-inch flatbreads that I always keep in my freezer, just so I can throw things like this together when the mood hits. I bought luscious Black Mission figs at the farmers’ market, which I sliced and laid across the top of the flatbreads. Dollops of Sonoma County fresh goat cheese followed, as did slices of beautiful prosciutto di Parma and some freshly ground pepper. I cooked some of these under the broiler and then I cooked some in a hot oven. I will try making some on our pizza stone next.

I can’t see how to give measurements for this recipe. I stood looking over the flatbreads, deciding which needed how much of each ingredient. This is something that you could provide the ingredients for, and allow your guests to make their own flatbreads. I suggest having extra of all ingredients. These are really a delicious treat.

The sweetness of the jam and the tang of goat cheese with the saltiness of the prosciutto produced some great flavor notes, not to mention the ease of execution of the recipe produced on great dish.

I adore a flavorful flatbread like this one, whether for a shared first course with a glass of wine or as an individual pizza-like lunch. The sweet taste of figs paired with salty, thinly sliced prosciutto is a classic one, and adding melted cheese to the mix makes this flatbread all the more tasty.

I think this would also be a nice idea for the grill to get the bottom of the flatbread a bit more charred from the grill’s grates.

In terms of the recipe itself, the only thing I would suggest is adding a bit of green—perhaps some baby arugula on top after the flatbreads are cooked. I think this would liven up the overall presentation!

My two flatbreads worked as 2 individual pizza-like lunches for 2 people or, if served to a crowd and cut into pieces, I would say these would feel 4 people generously as a first course. All depends on the flatbread size, though.

I had fig jam in the fridge, so that’s what I used to spread on the bread. Also in the fridge was some Brie, so I used that, sliced into 1/4-inch slices instead of goat cheese. It melted nicely underneath the broiler, just like the goat cheese would. I watched mine carefully under the broiler and it really only took about 2 minutes for the cheese to melt nicely, so I might say to alter the cooking time–just watch so nothing burns! Also, I only used about 4 oz. of Brie cheese instead of 8 oz. of suggested cheese.

I think the pepper is a nice addition to the tops of each; not finely ground but a cracked pepper gives a nice flavor to the cooked flatbread. Lastly, I think the recipe should suggest putting the sliced prosciutto directly on top of the jam, then the cheese. That way the cheese is closest to the broiler and isn’t hidden underneath the meat if that makes sense. Overall, a lovely first course or lunch idea! Just a few updates and I think the recipe will be perfection.

Simple and delicious, this recipe met most, if not all, my criteria for that dish you can put together in a snap that everyone will enjoy. Sweet, salty, creamy, and chewy all come together in each bite and the flavors harmonize beautifully.

On top of that, as someone with a gluten allergy, one of the things I’ve missed (and craved) for years has been the fig and prosciutto pizza sold in the late summer at a local restaurant. This was a winning substitute that I will definitely be making again. I used Udi’s Gluten-Free Thin and Crispy Pizza Rounds for the base, goat’s milk Brie, and Serrano.

It probably took the most time to separate the individual slices of ham from their cellophane backings.

I would definitely have used fresh figs if I had found them, but the jam worked well. I might decrease the amount slightly next time because although the flavors were balanced, I suspect that would be true even if I used less jam.

I would also try different cheeses, including soft goat cheese or even feta for a different, saltier flavor. The brie I used was a great choice for the Serrano ham.