These eggnog ice pops, made with cream, milk, eggs, sugar, nutmeg, bourbon, and rum, are a surprisingly fun way to enjoy the traditional holiday cocktail.

We know, we know. Eggnog ice pops? In December?! A bit unexpected and yet surprisingly fun. And who couldn’t use some of that? Welcome these rich, creamy, and ever-so-slightly boozy treats with an open mind and you won’t be sorry.

Can’t get past the idea of a frozen treat in the middle of winter? Try this creamy eggnog pie instead.–Jenny Howard 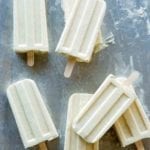 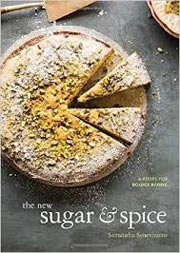 *Where To Find Ice Pop Molds

You can find all manner of shapes of ice pop molds online although you can also find simple ones quite inexpensively at dollar-type discount stores. Alternatively, you can use 3- to 5-ounce (88- to 148-ml) paper cups and wooden popsicle sticks and simply peel away the cups once the pops are completely frozen.) **What You Didn’T Know About Nutmeg In the early sixteenth century, nutmeg became so popular that people in Portugal strung it around their necks and carried graters wherever they went. Not only was it a fashionable sign of wealth, it was also thought to ward off disease. Perhaps we should bring this fashion back!

Love the look? Click to bring the LC Lifestyle into your home. Signature Saucepan by Le Creuset Popsicle Molds by Miaowoof

These eggnog ice pops are a perfect way to extend the eggnog season into the summer. These were extremely simple and quick to put together and were even more delightful to eat.

As they are so rich and creamy, I wouldn’t advise using molds any larger than 3 ounces. The popsicles came out very easily from the molds and looked perfect.

Such a lovely riff on eggnog for those of us who want our seasonal serving or two beyond the holiday! Quick and easy, especially if you have popsicle molds available—the longest part of this test for me was locating the molds.

After freezing, there was initially an issue of getting the pops out with the sticks intact, but we developed a quick warm water rinse and massage of the plastic mold to coax them out intact. They were popular, with the birthday boy having just one serving of cake but two popsicles, a clear indication of success. The next day, I stealthily observed him enjoying another several popsicles, and before I departed for home, we removed the remaining popsicles, placed them into resealable plastic bags for storage, and they are undoubtedly now long gone!

We were concerned about how much of an alcoholic flavor they would have, and we were pleasantly surprised that there was just a hint, no more.

I commented on the icicles in the popsicles, in a questioning way, perhaps with a slight bit of negativity, and received nothing but positive feedback in response to that comment – everyone liked this feature, noting that that was part of what gives popsicles integrity. Apparently, for those with more scientific or chemical knowledge than I possess, the alcohol also keeps the popsicles from freezing to a completely solid rock hard state, additionally enhancing their popsicle-ness.

We used cheap commercial popsicle molds of the Dollar Store variety and made 10 popsicles.

Let this eggnog ice pop recipe transport you. Christmas flavors abound in this eggnog pop. Creamy, decadent, infused with nutmeg, and just a hint of spirits, sceptical though we were about how good a frozen eggnog pop could taste, this recipe won us over.

The amount of nutmeg initially raised concern. I was afraid it would be way too much as I was using freshly grated nutmeg and 1 tablespoon equaled 1 gram. I think 3 grams would have been overpowering. It was hard to even use a whole tablespoon and it was against my better judgement but I went for it and it was perfect.

Because we didn’t have pop molds, we used small 5-ounce paper cups and inserted a wooden stick after 1 hour. I peeled off the paper from the pops without a problem when it was time to eat them.