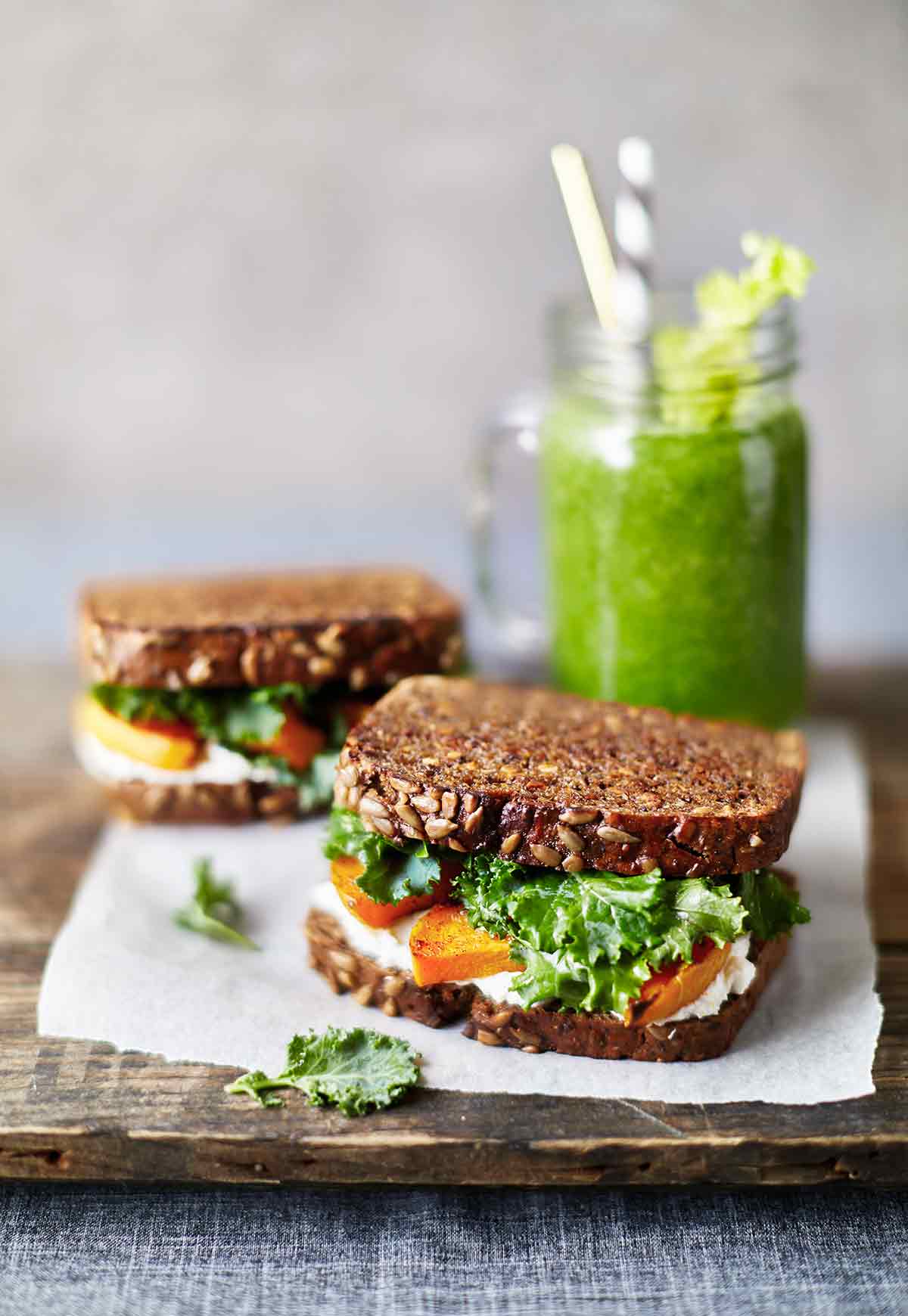 This grilled cheese with caramelized butternut squash and kale has everything going for it. It’s cheesy and surprisingly indulgent yet contains a respectable amount of vegetables so you can actually feel virtuous without needing to be abstemious.–Angie Zoobkoff

Preheat the oven to 350°F (180°C).
On a rimmed baking sheet, arrange the squash in a single layer. Drizzle with the oil and sprinkle with the spices and then use your hands to rub the oil and spices all over the squash slices. Give them a good sprinkling of salt and pepper.
Roast the squash, turning occasionally, until soft, sticky, and golden brown, at least 15 minutes.
Meanwhile, in a large bowl, stir together the kale or arugula and lemon juice. This will help soften the leaves slightly.
Butter 1 side of each bread slice and then turn the slices over. Layer the goat cheese, kale, and squash on 2 of the slices of bread. Top with the other slices, butter side up, and press down.
Place a nonstick skillet over medium heat to warm. Carefully place the sandwiches in the pan. Cook, flipping once, until golden brown, about 4 minutes per side. (Alternatively, you can set the sandwiches on a baking sheet and pop them into the 350°F (180°C) oven until golden brown, 8 to 10 minutes.)
Print Recipe

A hit! “Gorgeous” and “It was a beast,” said one of my tasters as he made his way through with pleasure. For starters, the butternut squash prepared with these spices could be served by itself. The combination of olive oil, dried chile flakes, ground nutmeg, paprika, salt, and pepper was so good I took a piece of bread to the roasting pan to scoop up the extra oil and spices that didn’t adhere to the squash.

My handful of baby kale turned out to be too skimpy in proportion to the other ingredients. “I don't understand the point of the kale,” said another of my tasters. The sandwich was terrific as made, but I would amend this to at least 2 handfuls as the color really made a difference, in addition to enhancing the overall taste of the sandwich.

I was traveling when I made this and I found the most beautiful 100% rye seeded with pumpkin seeds, sunflower seeds, and caraway seeds. It wasn’t the rye I had anticipated using but it worked perfectly for this sandwich and I would seek it out again, though I am certain a softer less dense seeded rye would also yield a tasty sandwich. That being said, one of my tasters noted that the bread really made a difference to his satisfaction.

It was clear to me that I would not be able to stack the ingredients and then flip the sandwich over, so I opted for the pop-it-in-the-oven approach, even before I assessed the messiness of the melted cheese. Hence there was no butter involved in my sandwich.

Because I did not attempt to make a sandwich that could be placed in a pan and flipped over, I made my sandwiches open-faced, and there were therefore 4 of them. I layered the goat cheese, kale, and squash as directed, but just did not place a slice of bread atop.

Three hungry eaters each ate one of these sandwiches and despite their enjoyment, no one needed a second in terms of being satisfied. Note that we ate these with fork and knife—a steak knife was perfect to carve through the layers.

Going back to my tasters for a moment, they felt the open-faced approach was how it should definitely be served. Additional thoughts included making smaller slices of bread or rounds of bread and stacking them up, perhaps with the assistance of a toothpick, and serving them as an appetizer with a splash of balsamic atop and, if serving for brunch, for example, adding an egg atop as well. This would also be wonderful alongside a bowl of soup in the winter, especially next to a roaring fire in the fireplace.

This seemingly unusual combination of sandwich fillings turned out to be a fantastic grilled cheese. The combination of toasty rye, tangy goat cheese, sweet and spicy squash, and lemony kale was a flavor explosion! Who needs meat?

I think the amount of cheese in each sandwich is a pure preference thing and easy enough to adjust if you prefer more. Also, 1/2 a squash made WAY more than could fit into 2 sandwiches. My half a squash yielded about 15 slices and I only need 3 per sandwich.

Loved the flavor combinations. The heat from the spices and the caraway did a great job of cutting down the sweetness of the squash and cheese. The texture combinations were great: crunchy bread, gooey cheese, and soft roasted squash.

This grilled cheese sandwich is for adults who desire to raise the humble grilled cheese to a higher level. The mixture of rye bread, spiced butternut, goat cheese, and lemony kale are all complementary. Be prepared for a small amount of heat from the chili flakes. If you enjoy heat, the chili flake measurement is the perfect amount as listed in the recipe.

My kale was by no means baby kale, it was quite large and quite tough so besides the lemon I added salt and a dash of olive oil to soften up the kale. I worked it in with my hands. It softened up without becoming oily or soggy.

So delicious! I will be making this again soon!

I do like this sandwich—a nice combination of flavors and textures for a simple, healthy lunch with a bit of sophistication.

If I were to make it again, I might go a little heavier on the spices, but that’s personal preference. My butternut squash half was prepeeled and chopped from the store, so it made whipping this up even easier. I had to roast my squash for 20 minutes to get it where I wanted—tender, but not mushy, still maintaining its integrity.

I spread my chevre on with an offset spatula, which worked nicely. And I left my butter out so that it got a bit softened before spreading on.

I used smaller slices of bread, so I ended up making 4 sandwiches but these ingredients would also make 2 full-size sandwiches.

I chose to make the sandwiches in the oven instead of in a skillet so there would be less clean up but they did stay together quite well and I didn’t have any issues with the cheese coming out.

I liked that the kale did get a bit wilted but not too much in the oven.