This ligurian almond cake is a classic Italian dessert made with blanched almonds, flour, sugar, eggs, and lemon. It’s not overly sweet, so you can easily enjoy it any time of the day (breakfast included).

This remarkably—and deceptively—simple Ligurian almond cake boasts an understated elegance, a not-too-sweet taste, and pleasantly dense crumb that are the hallmarks of this classic Italian dessert.–Angie Zoobkoff 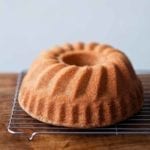 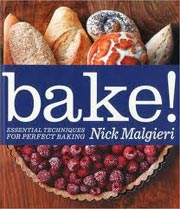 I loved the idea of this Ligurian almond cake, especially because I love the dense texture an almond cake almost always delivers. Also, having stood over the bowl removing the skins from the almonds before toasting them, I had invested a bit of myself in this. I even enjoyed that part of the prep after years of being my mother’s prep chef for baklava and other sweets for holidays.

It tastes wonderful. The batter comes together beautifully (and also succeeds in using both the food processor and stand mixer, keeping the dishwasher busy, too).

Buttering the pan and then dusting it with break crumbs was easy, but the crumbs don’t really adhere in a very dense fashion, so I think if you left them out that would be okay. I don’t really think the cake is going to stick, partly because it has so much butter in the batter.

I had misjudged the knife test earlier and felt completely defeated. But once it had cooled, it was remarkably good tasting. I divided it and put 3/4 in the freezer to use for future desserts, and over the next several days we had the quarter I kept out. The least cooked parts have an almost marzipan moistness, what some folks call a “puddin’y” cake, like what you might look for in a brownie. With fruit, or a bit of gelato, this is actually delicious.

I dressed up this almond cake with fresh sliced strawberries and a scoop of vanilla ice cream and my tasters all loved it. It isn’t super sweet and there is a nice “crunch” from the ground almonds.

This cake will keep on the counter for several days and I’m sure it could be held in the freezer for a month or two. I’m sure most people know the trick of using butter wrappers to butter cake pans. “It’s a good thing,” to quote Martha Stewart, because you’re saving rather than throwing butter away and it comes in with a built-in spreader (the wrapper.)

I didn’t have blanched almonds on hand and so I blanched the almonds myself. It was a little time-consuming but I saved money and it was super easy to do. You boil water, remove the pan from the heat, and immerse the almonds for exactly 1 minute. Then you dunk them in cold water to stop the cooking and gently squeeze the skins to remove them. You’ll know you’re on the right track when the skins appear to be a bit shriveled after they’re removed from the boiling water.

I also whisked some day-old bread in the food processor to make plain bread crumbs. You really don’t want anything pre-seasoned for this recipe and, as a matter of fact, I never want to use those pre-seasoned crumbs as I prefer to season according to my recipe and my taste! While I believe the bread crumbs could be replaced with a dusting of AP flour, I found that they added a little extra crunch to the outside of the cake as well as a rich brown color. I don’t think they absolutely need to be sprayed since they nicely adhered to the butter.

This batter is quite dense and I used a small offset spatula to even it out in the pan. The baking time of 45 minutes was perfect for my 3 small cakes. I think a Bundt pan with all of the batter in it may take some additional time. Be sure to run a knife or spatula around the edges of the pan to help the cake release.

This cake’s advantage is its flavor. The almond meal made the cake have a melty texture and it was quite easy to make. The citrus went really well with the almond flavor.

I used almond flour in the pan and not bread crumbs.

My husband, Jason, recently decreed that the Bundt cake, in its many incarnations, is the perfect cake. As far as he’s concerned, there is not a superior cake. I’m not sure that I agree with that blanket statement. But this recipe absolutely reinforces his theory.

This was an easy one to choose to make with his deep abiding affection for Bundt cake and my love of all almond desserts. It’s a very simple straightforward recipe.

I’d never lined a pan with bread crumbs before and it released the cake perfectly! We ate it plain the first night and Jay exclaimed, “How can a cake be so rich and buttery and still so light and fluffy?!?” That is this cake in a nutshell.

I don’t know how much the lemon zest really contributed to the flavor of the cake. I would want to either punch up the lemon a bit more or substitute it with some almond extract and just go full almond. Yesterday we had it with sour cherry preserves and a bit of creme fraiche. That was pretty life changing.

This is a perfect afternoon tea cake. And I’ve frozen half of it for future snacking.

I served this on its own and with strawberries. The cake texture is firm and hefty with a lot of deep almond flavor. The texture isn’t completely smooth, it has some mouth feel, which is nice. We’ve enjoyed it mid-morning and after dinner. It isn’t too sweet (that being a positive) and has lots of good flavor, so it’s a versatile cake. I hesitate to call it a cake—it’s more of a coffee cake consistency.

I wasn’t keen on adding cinnamon to an almond cake but it was subtle and I think it added some complexity to the finished product.

I have two favorite almond cakes that I make often. One is a delicate Scandinavian almond cake which is easy to make with a delicate, melt-in-your-mouth crumb. The other is an almond cake that calls for almond paste and the center is very moist but not pudding-like. The method in this Ligurian Almond Cake was so similar to it that I compared recipes. What struck me is that both recipes call for beating the mixture for a long time – kind of unusual. But the texture of both final products is very different and cannot even be compared. The crumb in this cake is dry, the other, very moist. There is a place for this cake!

This Ligurian cake has the feel of something that you could snack on all day and isn’t too rich. I would make it for completely different reasons or intentions than the other two.

This cake is easy to make, has great almond flavor, and a sturdy texture. It’s an ideal snacking cake, and I would make it again. As I am typing, I just received a text from my age 20-plus-year-old daughter that she “ate it for lunch, snack, and now!” It’s that kind of cake!

A good, simple almond cake with a touch of lemon—this cake will be dependably enjoyed by all. It sliced beautifully to reveal a tightly crumbed interior encased in a golden brown crust that was crisp at the edges. And, like many pound cakes or coffee cakes, the texture improved the following day, becoming more solidly moist. A cake like this is so versatile, you can eat it with your hand with a cup of tea or coffee in the other, or set it on a napkin next to your laptop, or serve it on pretty dessert plates at a dinner party.

I baked mine in a 10-cup/9-inch, light-colored Bundt pan and the cake was done in 55 minutes. It did have one cosmetic issue, though. There was a dense layer just below the top of the cake (at the bottom after the cake was inverted). It appeared wet and slightly undone, even though the cake was baked through and through. It looked like a sign of the cake collapsing due to either over beating or the cake cooling too fast, which made sense here. Adding eggs in stages involved thorough mixing followed by a full minute of beating after each of the 3 additions. By the time I was done, the first 2 eggs and butter had been agitated and beaten at medium speed for well over a few minutes, and some of the air bubbles (a key to building the cake’s structure) may have been destroyed. Also, the cake was still quite hot after 5 minutes of coming out of the oven. Removing the cake from the pan while it was still fragile inside, and inverting it may have caused the cake to cool rapidly and fall, and the weight of it to deflate the air bubbles.

Whatever the reason for the condensed layer, the cake was still delicious and lemon curd became a handy tool for hiding the imperfection. Equally a tasty and practical accompaniment was homemade orange marmalade (I had it in the freezer!), gently warmed in the microwave with a bit of water for a pourable consistency.

For the “fine” bread crumbs, I whizzed 1/4 cup of panko in the food processor until almost powdery. It worked well.

The texture reminded me of the Zingerman’s Sour Cream Coffee Cake but with a bit of mealiness from the ground almonds.