Roast pork, potatoes, and pears may seem like an unlikely combination for a casserole, but this simple, homey German classic will surprise you with just how wonderfully the flavors meld.

Don’t get tripped up by the curious combination of roast pear, potatoes, and pear in this simple and comforting casserole. Or by its oddly unfamiliar name of “Shoemakers Pan” in its native Germany. It’s actually a homey classic that brings a little frugal yet creatively ingenious common sense to the table.–Jenny Howard 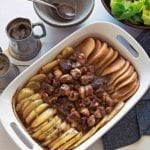 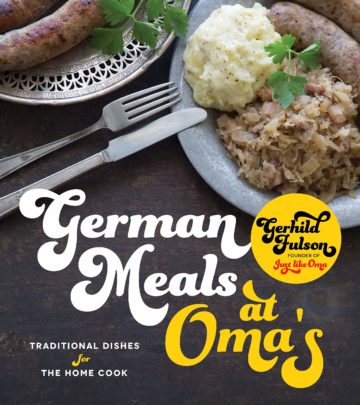 I adore one-dish meals and this one is no exception. It’s a great comfort food and comes together pretty quickly and easily–the flavors are delightful together and it’s such a simple but creative way to feed a crowd!

I’ve known since grade school that I’m artistically challenged. I always hoped I would outgrow it, but 60 years later, it appears I am still artistically challenged. For all my effort, I do not see the shoe. It is some comfort to me that when I asked my dinner guest to guess what dinner represented, the answer I got (after a long stare at the pan) was “Food?”

Fortunately, I am a better cook than I am an art critic. Also fortunately, I have long felt that caraway is an underappreciated herb. Shoe or no shoe, this recipe made a pleasant, flavorful dinner that fit the bill for a comfort food with a bit of a twist. Since I had pork left over, I made it again later as a stew. The verdict: less work, same good taste, less embarrassment for my artistic incompetencies. I saved about 5 minutes making it as a stew instead of making it pretty.

I used pork shoulder, chicken broth and Bosc pears. I needed about 2 1/2 cups of broth.