This spring vegetable stew turns an array of irresistible early-season produce, including peas, asparagus, artichokes, greens, and fava beans, into a lovely—yet also healthy and vegetarian—supper.

Think of this spring vegetable stew as jazz hands heralding the arrival of spring produce. Asparagus, peas, artichokes, and greens are gently coaxed to tenderness in a supper that’s lovely on its own or atop pasta. A welcome respite to winter’s heaviness. And if you’re someplace where spring is still more of a dream than a reality, you can easily pull this off with what’s in your freezer.–Heather Thomas

How long does vegetable stew last in the fridge?

A general rule of thumb is that soup can be stored in the refrigerator for about three days.

Do fava beans cause gas?

Like most legumes, fava beans can cause flatulence due to their high fiber content. For those with a tendency towards…ahem… windiness, it’s a good idea to eat a smaller portion of legumes, and ensure they’ve cooked until very tender so that they’re more easily digestible.

Do I need to peel asparagus?

There’s really no need to peel asparagus unless you’re doing something decorative. Peeling is labor intensive and unnecessary – if you snap off the bottom tough portion of your asparagus, the rest of the stalk is completely fine to eat. 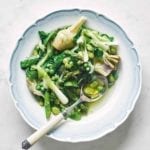 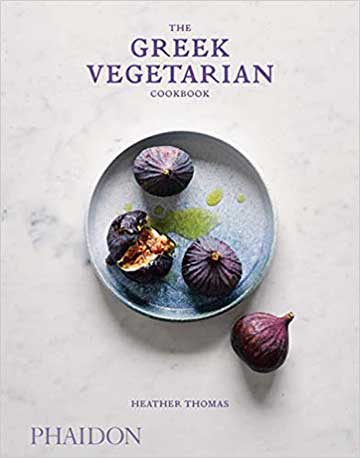 How To Glam Up This Spring Vegetable Stew During Any Season

Depending on what’s in season, you can add baby zucchini and carrots, shallots, quartered heads of omaine lettuce, even chopped parsley, dill,or basil. If you’d like to make the stew heartier, stir in some cooked pasta or a swirl of pesto before serving.

This is a terrific spring medley. The sauce is light, delicious, bright, and pretty. We are inspired by the many variations suggested and will certainly make this again. If you have artichokes in the pantry and peas in the freezer, then really you can add whichever fresh vegetables you have on hand.

Since we used artichokes from a jar and we did not include fava beans, this came together very quickly, with the total cooking and hands-on time about 30 minutes.

We used one asparagus, frozen peas, fresh spinach, juice of 1/2 lemon (scant 1 tablespoon), and just a sprinkle of mint served on linguine and topped with grated Parmesan.

Enjoy this light and refreshing stew as a first course as is or add some pasta and have a very delicious main. This is an excellent recipe made special by the broth, lemon juice, and mint. Substitute vegetables as the season dictates. Simplify by using frozen or jarred artichokes as this is the most time-consuming portion of the recipe. This will definitely make my spring recipe rotation!

Funny thing about making spring vegetable stew on the East Coast in winter is that the spring-style veggies aren’t really, well, quite ready. The spring onions I found weren’t fat, the asparagus were less than pencil thin, and in contrast to that, the artichokes were jumbo! Despite these culinary quirks, I made it through this recipe with a few slight changes.

Since the artichokes were jumbo I used 3 total. After steaming and trimming, it became clear that these overwintered artichokes had gone bad. All of them. Brown in the center with little if any edible artichoke core. Plan B was a can of quartered artichokes, in water, I had on hand.

I chose not to use fava beans as they aren’t my favorite, so continued on to softening the onion and garlic. I seasoned here as well with salt. All went well and timing was perfect. Next I used far more asparagus than 12 as they were miniature. About 3 times as many. Really, these things were so young I was feeling a bit bad they were taken so soon. But I forged ahead and cut them to 2-inch lengths, halved the regular-size scallions, and added them to the pan. The asparagus turned positively brilliant green!

The brilliant green color of asparagus and peas was so appealing in this dish.

The lemon juice along with the mint brightened up the finished dish. I chose Romano cheese for my garnish and it didn’t disappoint.

A few things to make the dish more appealing to eat. I would cut the scallions to the same size as the asparagus. I would season with salt at each step. I added 3 good pinches of salt at the end of the cooking process, when all of the vegetables were in the pan.

I didn’t add pasta or pesto to my finished dish, but I will when I make this again! Such a smart, delicious, convenient way to use spring vegetables and highlight their goodness.

This combination of spring vegetables is a satisfying dish, easily a complete meal. There are a couple of prep items that can be done ahead, but this will still take a bit more time than you might want to spend on a busy weeknight. Come spring, I enjoy sitting outside and shelling favas and peas, and those items can be done even the night before. Depending on how early your favas are, it may take quite a large amount of whole pods to yield your 1 cup (I had 800g before shelling and got a scant 122g cup of smallish beans from the first favas I have spotted in the market). I had to settle for frozen peas, but bought the nicest ones I could find, nice large ones.

The most tricky thing is finding tiny enough artichokes. If you live near where artichokes are growing, you can often find tiny ones in bags of 10 or 20 for just a few dollars, but if you look in a grocery store you are more likely to see medium or large ones only. I picked the smallest I could of the “medium” frost-kissed ones (early season, and the outer leaves get trimmed away so the frost blemishes are left to the compost), and trimmed away the outer leaves until only pale green more tender leaves remained, and I sliced off the top, tus removing any leaves that were prickly at the top, peeling the trimmed stem. Since mine were a bit larger than I hoped for, I quartered them using a melon ball tool to remove the fuzzy choke. Although the stems seemed tender after 10 minutes, I really should have cooked them at least twice that long, as the leaves really were not tender enough in the end. This might argue to use good-quality baby artichokes in oil so as to not disappoint, because the combination of these vegetables is so nice. Trying to give my artichokes a little extra care, I added them back in a little earlier and added an extra 5 to 6 ounces of vegetable stock as well as putting a lid on the dutch oven.

You can use the same salted water from the artichokes for the favas (and do so while the artichokes are cooling enough to handle and finish removing he fuzzy center. I reserved that water for a small amount of farfelle (bow ties). We served with shavings of Kefalotyri, which had the right mild saltiness without being overpowering.

This is a generous recipe and while it was a pretty bright green the first night, it had faded a bit when I reheated it the next day for lunch, but it as still delicious. My only disappointment was apologizing for the artichokes because they needed to be eaten leaf by leaf, with some fibrous bits to discard.