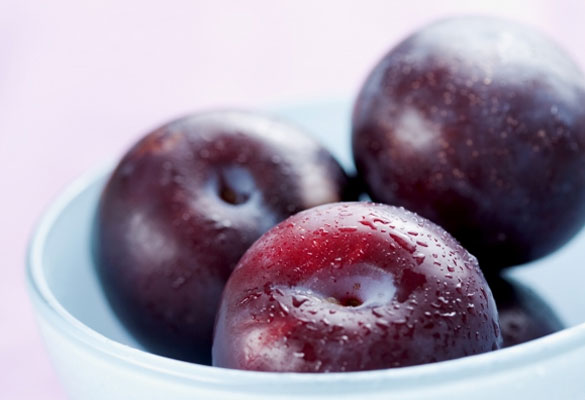 He comes out of the bedroom to find her sitting at the table in the kitchen, leafing through the day’s mail. In the center, piled into a small white bowl adorned with ceramic flowers, sits her latest acquisition, a small number of plums, no more than seven or eight. He has never been particularly fond of plums, unable to reconcile the sweet fruit with the surrounding bitter skin that he found so displeasing. But these are the perfect shade of plum, a purple-blue-black with little patches of gold-green near the top that break into speckles and then disappear within a centimeter or two. They are like bruises—perfect, juicy, stone fruit-shaped bruises—and he holds a perverse shame in his desire to eat one. He knows she would readily share this little bowl of loot with him, although he also knows she bought them thinking that only she would eat them. His strength, he believes—and, he assumes, she believes—lies in his constancy.

One syllable, nothing more, nothing less, not even a glance in his direction. She finishes leafing through the mail, creating three piles—bills, things of interest, things to throw out—and then pauses to contemplate which pile she wants to devour first. Stepping closer, he can see that the plums have been washed. The late afternoon sun, just beginning to turn orange, slants in through the westward window of the kitchen and turns each lingering droplet of water into a diamond of sorts.

“That’s nice,” she says, her hand reaching tentatively for one pile, pulling back, then reaching for another. He is just as tentative, edging forward, looking at the plums. One of them is showing a sliver of itself through the downward sloping edge of two petals. This is undiscovered country, this plum whose perfection is partially hidden, obscured in parts by the other plums around it and by the bowl that contains it.

Below the lip of the bowl, below the plum that demands his attention, the pile of mail that he assumes to be bills is as large as ever, and now, just recently, there is only one income to pay them. There has already been cutting back. And there is more yet to be. The newspaper is a luxury about to be given up. So is watching television or other wastes of electricity. He spends much of his time following the sun around the house during the long, solitary days, finding whatever corner seems to be catching it best so he might curl up in its warmth and, until now, read the paper. Even the food budget is strained, the solution more potatoes and less meat. Plums are not in the budget.

“Any replies to my resumé?” he asks, getting close enough so that he could leap forward, if he chose, to snatch the one plum and run back to the bedroom to consume it, alone with his private glee.

She leafs through one of the piles and then puts it down. “No.”

Finally she has decided to eat a plum, and proceeds to do so as if it is the most commonplace possession in the house, and not something special to be savored after dinner. Instead it is consumed here and now. She reaches forward, then pauses and glances at him. In the quick turn of his head to meet her gaze, he wonders if she caught him looking at the plums. She smiles, so sweetly, as if to reassure him that a reply will come, that she knows he is trying very hard to find work. He smiles back, trying to convey confidence.

“No,” he says, shrugging the offer away, “you know I don’t like plums.”

In earlier times she would have teased him, telling him how good the plums look, how juicy and sweet they must be. She would have played with him, inviting him to join her in the enjoyment that he didn’t share but that she wanted to share with him. Instead, this time she simply reaches for a plum, the one on the side of the bowl closest to her, his plum, the one he wants more than anything else he could imagine at this moment, leaving one less. He holds himself quiet, refusing to protest as the plum is drawn to her mouth and bitten. He watches and attempts to smile as she consumes the delicacy, not so slow as if she is savoring it and not so quickly as if she is ravenous for it. It is just a casual eating of a plum, consumed in regular, moderately paced bites, until there is nothing left but the pit. She turns in her seat, looks over to the trash can, and gives the pit a toss, lobbing it swiftly and perfectly into the shallow depths. There isn’t even the sound of it hitting one of the sides, the contents from earlier in day cradle it.

He remains silent, watching, trying to hold his smile, as she turns back to the table and contemplates her piles as she licks her fingers.

This, he knows, is the beginning of the end.

© 2010 Greg Bulmash. All rights reserved. All materials used with permission.

Greg Bulmash is a computer consultant with a degree in Creative Writing who specializes in PHP web development, runs his own small web incubator called Kablowie Studios, and blogs about the PHP language. A former senior editor for the Internet Movie Database and minor web celebrity of the 1990s, he occasionally writes about food and has been working on the same novel for the last 18 years. His latest project is helping his seven-year-old son write a computer game.