How to Skip Thanksgiving (But Not the Giving Thanks Part) explains how sometimes, yes, it is okay to not follow tradition at all costs. Renee shares some ideas for getting through Thanksgiving when you’re not with family. 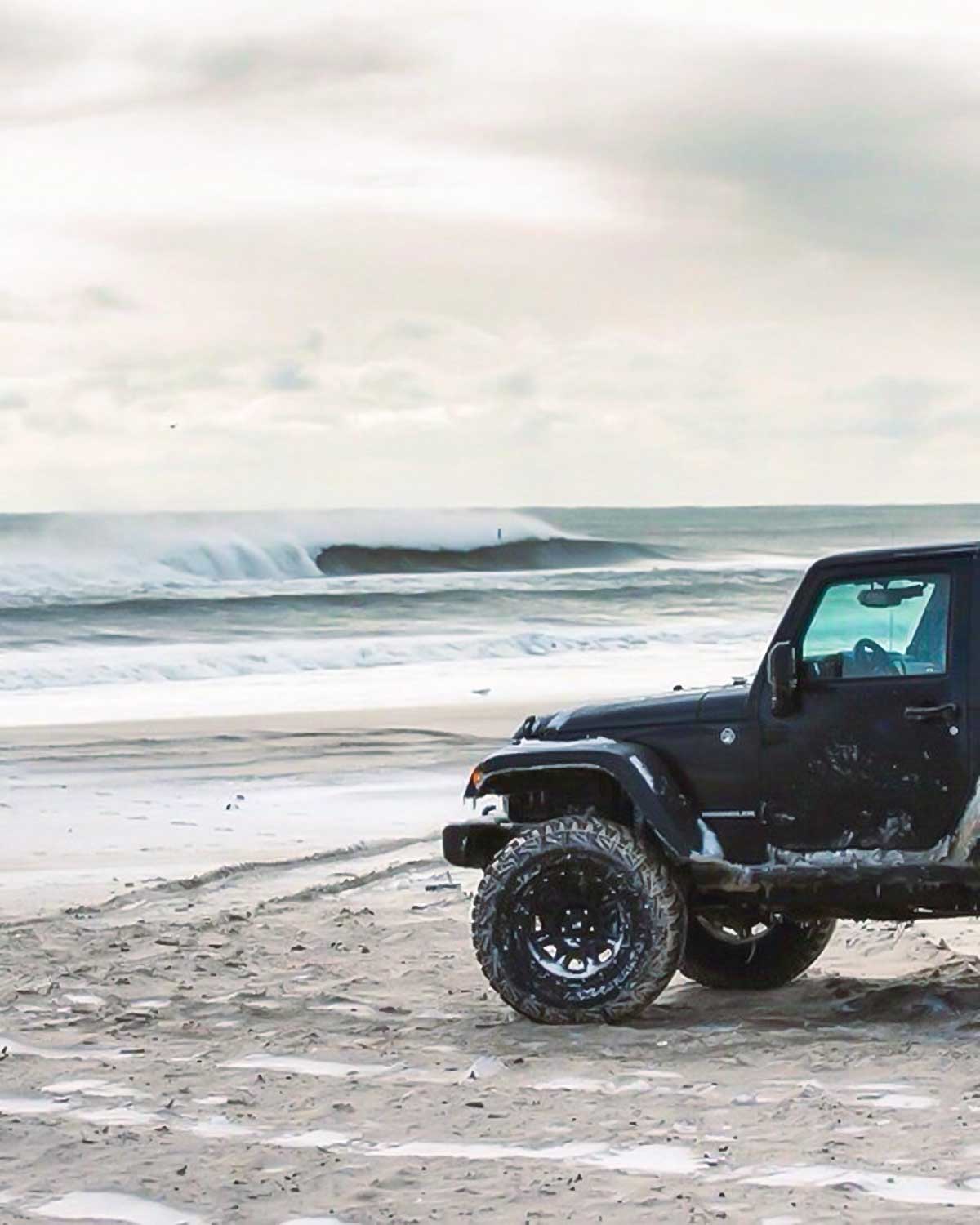 It was late Thanksgiving morning. I was standing in my cramped bathroom, situated in the awkward space between the commode and the sink, holding the shower curtain to the side and staring at the 24-pound turkey in my tub.

The night before, I’d been out with a girlfriend at one of those Prohibition-style speakeasies. She was in town for the long weekend and, after quite a lot of catching up and even more cocktailing, it was sufficiently late—and I was sufficiently drunk—that I remained blissfully unconscious when my alarm went off a couple hours later. I woke up minutes before my early morning flight back home took off without me.

There was a moment of dazed confusion as I took in what had happened. And then considered what wouldn’t be happening. Like making the boxed stuffing my little sister loves. Teasing my brother about the things he and I saw differently. Hearing clangs and exasperated curses in the kitchen from our matriarch whose Thanksgiving tradition was to flat-out refuse to let anyone help. And to let me know what hair style she thought would be more flattering on me.

It was my 27th Thanksgiving. I was no stranger to not being with everyone I wanted on that day. My folks had divorced ages ago and since then court decisions and legal documents determined the place settings at the table. And after high school, I’d left for college a pricey plane ticket across the country. As my dad would say, “It’ll be Thanksgiving whenever I see you.” As such, Thanksgiving was never entirely attached to the last Thursday of November for me.

That morning, I slipped back into bed and contemplated my options. With my boyfriend there and me an aspiring food writer, it seemed less a decision than a given as to what was entirely proper and appropriate. Namely, cooking.

I began sorting through my stack of dog-eared magazine pages, torn-out newspaper articles, and inspirations hastily handwritten on the backs of envelopes. There were turkeys basted with butter versus slicked with olive oil. Pronouncements on the properness of cornbread stuffing. Long-winded essays about mashed potatoes. Cranberry recipes that seemed more like incantations. Musings on the relative merits of something green on the plate. And, as I’m not crazy about pumpkin, there were fanciful thoughts of all things apple. 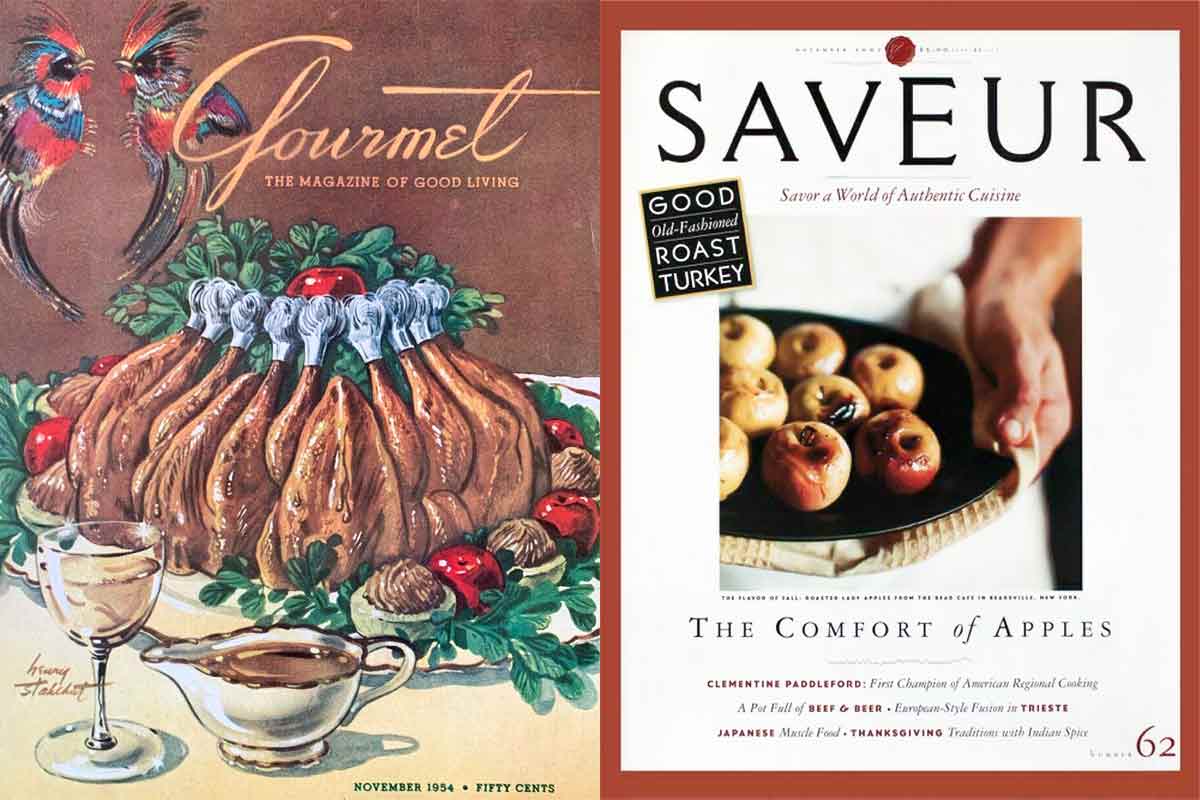 I ducked out to the grocery store and snagged the smallest of the last lonely turkeys in the case. Back at the apartment, I plunked the bird in the bathtub and spent the day dancing between changing the water in the tub for a partly submerged hen that remained almost entirely frozen and maneuvering nearly a dozen recipes in a kitchen that barely had space for a single person, my stove’s four burners aflame, my cutting board perched precariously over the sink, my ledge outside the window a cooling rack, and me quietly murmuring prayers to the gods of cooking.

The first several hours slipped by with relative ease. Here and there I escaped the kitchen to hang with my guy for a few seconds and catch some of the game before I once again paced between bathtub and stove, silently willing that defiant turkey to thaw. And when it eventually succumbed, I retrieved the soggy plastic-encased hen from the tub and hurriedly slid it in the oven. 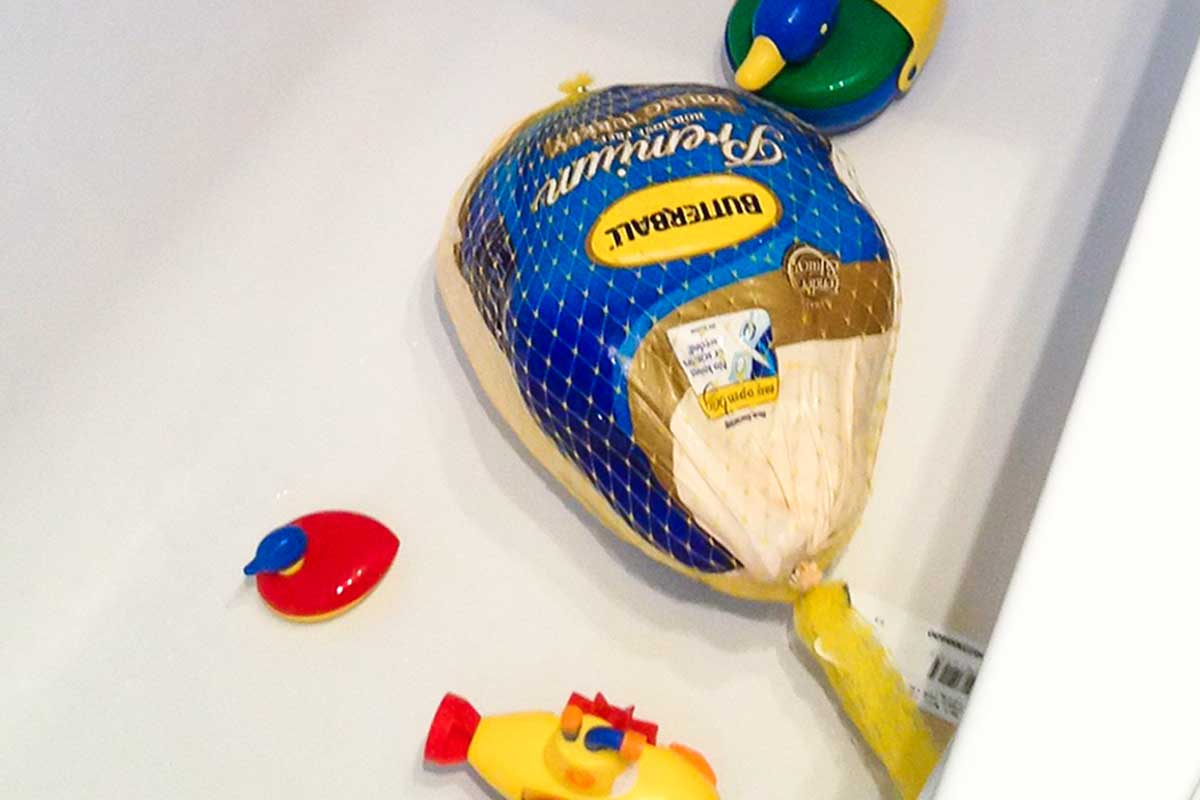 By the time the light outside started to fade, I started to experience a strange weariness. I shrugged it off, figuring it was lack of sleep. Although with each moment I continued to fuss in the kitchen, I felt sadder and more despondent that I wasn’t hanging on the couch watching football or, better yet, laughing and tossing an actual football around outside.

It was after 8 pm when we finally sat down to dinner, each of us grumpy with hunger. The gods of cooking took kindly to us that day. The turkey skin turned out handsomely burnished and obscenely crisp. An ad-hoc dressing of sourdough and cornbread—because I couldn’t decide between the two—and obscene amounts of butter came out with a quiet luxuriance. The simple pan juices were a revelation compared to lumpy gravy. The tartly sweet raw orange cranberry concoction that came from a recipe recited by a chef I knew was swoon-worthy. Even the pearl onions seemed worth all the tears it took to wrestle their papery skins from the naked onions beneath. And I can still taste that apple pie thanks to its pleasing proportion of cinnamon to ginger that remains the basis for my go-to recipe years later.

It was exactly the Thanksgiving dinner I’d thought I wanted.

Except that year it wasn’t what I needed.

What I needed was a more nuanced understanding of what my dad used to say. A knowing that Thanksgiving had little, if anything, to do with the day or what’s on my table and everything to do with who I wanted at my table.

And so the following November, confronted once again with being away from loved ones, I let myself be the quietly defiant one rather than a frozen turkey. I had ordered takeout from the Vietnamese joint around the corner the night before since they were closed that Thursday. My usual Number 51,  known by the kitchen staff as Extravagant Noodles, along with Number 28, which was grilled pork left to soak in an ever-so-slightly-sweet star anise-infused elixir. I spent my day, in between reheating leftovers, on the phone with those very same people I would’ve liked to clink chopsticks with and thought a lot about the ones who I could no longer reach by phone. 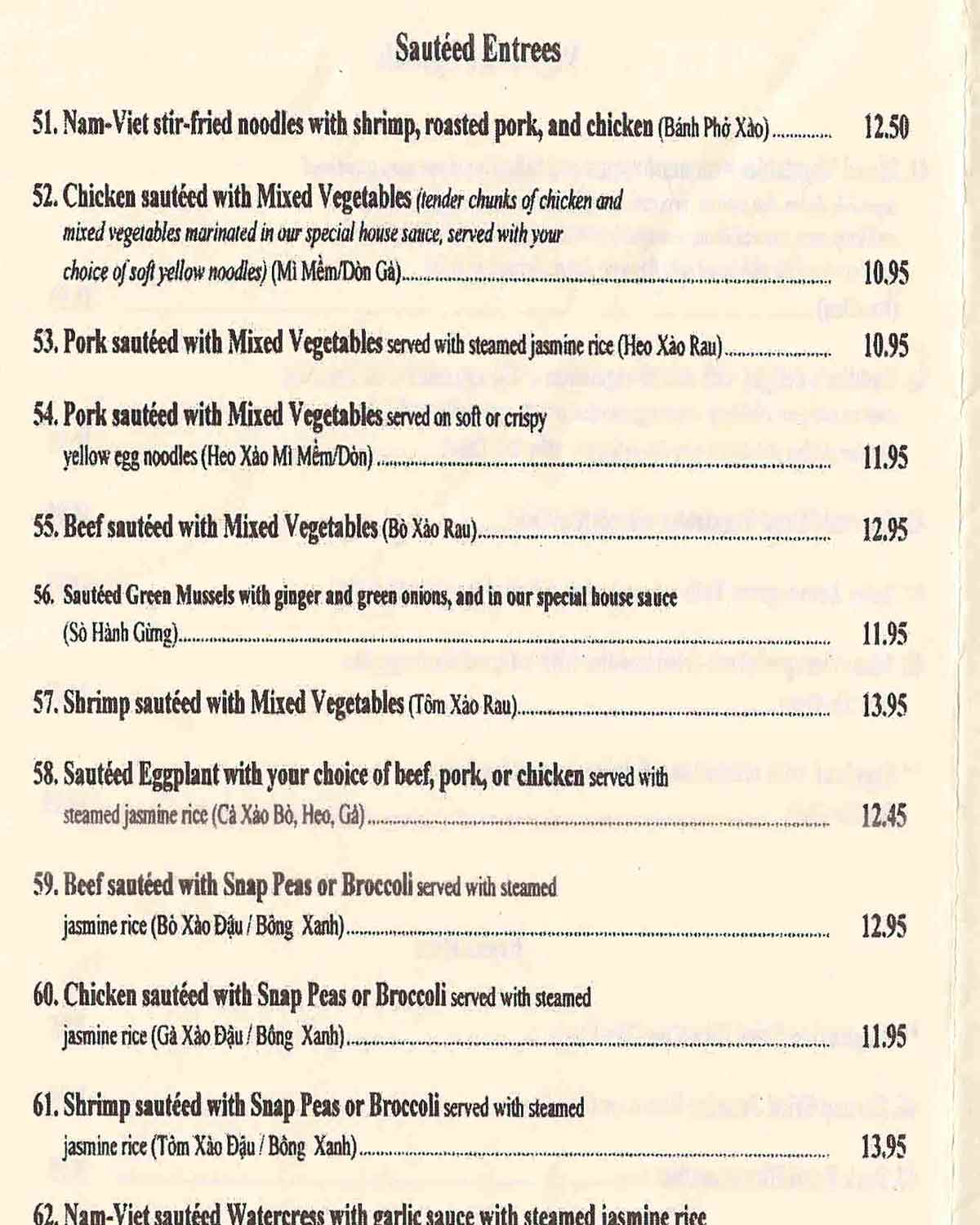 Another November, there was a road trip to a deserted beach for some four-wheel driving on the fourth Thursday. Waves crashed and slammed on the shore as I lingered over sandwiches of ciabatta piled high with turkey I’d roasted the night before and smothered with cranberry loveliness. The beach was bare save for an immeasurably small snowman someone had fashioned from sand.

There was the year my editor insisted I borrow her house in the Hamptons for Thanksgiving. My grocery list the day before was simple. Just a couple salt-and-pepper ribeyes to be seared in a cast-iron skillet left behind in that drafty old farmhouse kitchen. The Hamptons was not my social scene, so instead of heading to bars later, I crept to the centuries-old cemetery across the dirt road and scared myself silly and sleepless. 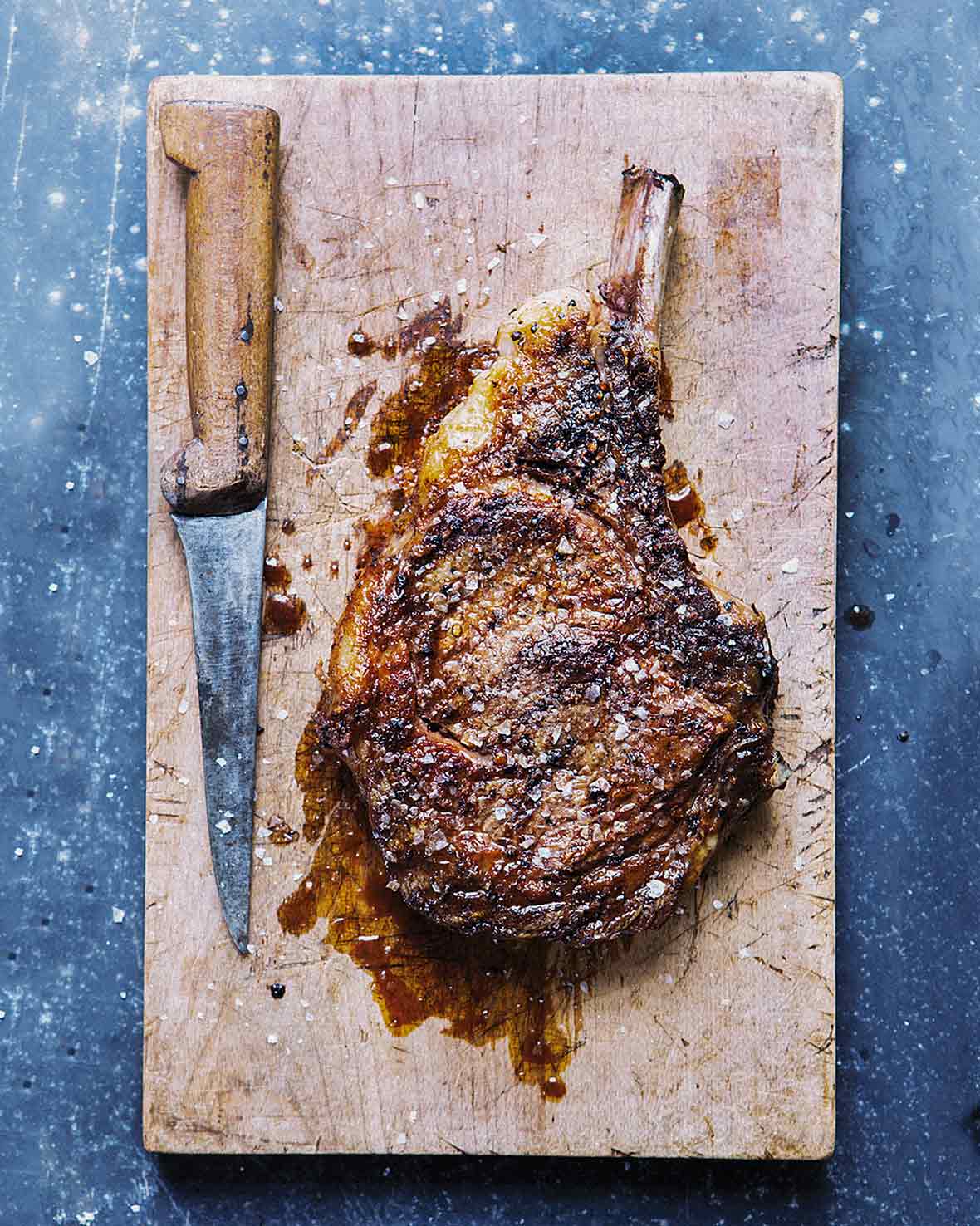 Perhaps the most memorable Thanksgiving was spent doing nothing but meandering in Central Park, lazing about the apartment, and, eventually, executing some exquisitely crisp fried chicken which was inhaled straight from the brown paper bag moments after it came out of the oil. By candlelight.

Each of those years I was away from my loved ones. I celebrated with them weeks or months later, whenever it was we happened to see one another. Not over turkey and stuffing. Over early morning coffee. Some swell takeout. Old comedies that made us laugh.

And on those rare Thanksgivings when the opportunity to be with them presented itself, I took it. With greater appreciation than before. And without complaint. Not about the Stove Top. Or the exasperated sighs. Or the clangs and curses.

In between those years, I continue to remind myself not to make Thanksgiving something that, due to circumstances, it’s not. Instead, I let it be what it is. Knowing that whenever I do see the ones I love, it’ll still be Thanksgiving. Without even trying.