This vanilla sheet cake is an easy-to-make one-pan cake that’s topped with Swiss meringue buttercream frosting. Perfect for birthdays or any special occasion.

Just like my chocolate sheet cake, my perfect vanilla cake is a one-bowl affair made with buttermilk for a little tang and a wonderful moist texture. A great vanilla cake deserves a very special buttercream, so for this recipe, I have turned to a super smooth and silky Swiss meringue version. You can make this cake with ridiculously little effort and then while it bakes, you can quickly knock out the buttercream. As vanilla is the dominant flavor, this is a recipe for which I would splurge and use a vanilla pod for the buttercream.–Edd Kimber 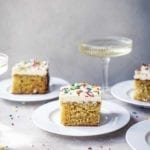 For the vanilla sheet cake

*What Can I Do With That Used Vanilla Pod?

In a prior review, I remarked that I came for the cake but stayed for the frosting. That statement is equally true in this case. The frosting is the star. I would need to swallow a thesaurus to have enough adjectives to describe this singular frosting. It is so good that it almost makes you want to abandon chocolate frosting.

The cake is easy to make. The use of boiling water in addition to the buttermilk and oil was a surprising twist. The batter was thin as described. What emerged from the oven was an airy golden brown marvel. The result is a soft, spongy cake with a flavor that doesn’t overpower the frosting. It serves as the platform which allows the frosting to take center stage.

The frosting is a snap to make. It’s light and seductive and doesn’t reveal the sinful amount of butter used in the recipe. I was anxious about the frosting because I have a love-hate relationship with egg whites. I fear them almost as much as meat cleavers and mandolines. No matter how many photos I look at, I am always trying to figure out when I have reached soft peaks versus stiff peaks. I cannot count the number of overbeaten disasters I’ve produced. That being said, I was not to be deterred and the egg whites had the good sense to surrender and give me a lovely shiny set of stiff peaks.

With the biggest hurdle conquered, I added the butter, salt and vanilla as directed. The frosting was velvety smooth and the taste was more vanilla than butter. It makes the cake whole as the two flavors join together. It’s also a frosting which could be eaten directly from the bowl when no one is watching.

The cake is very festive and will add a quotient of joy to any event. It will delight vanilla and chocolate lovers equally. The cake would be easy enough to throw together for that last-minute party or school event. Covered, it lasted the better part of the week and we consumed every last morsel. My husband loved it as well.

I used the convection bake setting on my oven and reduced the temperature by 25 degrees to 325°F. I rotated the pan at 17 minutes into the cooking cycle. The cake was done at 35 minutes and was a lovely gold color.

If you need a cake that simply needs to be good enough, this is the recipe. This cake was easy to prepare by hand as the author promised. I like that it used oil rather than butter because I think it makes the resulting cake more moist. I used a glass baking pan which caused the edges to be a little tough, as pyrex usually gets hotter than metal pans. Other than that, it tasted good with a simple flavor and soft interior. It’s not overly sweet, nor overly “cake batter” flavored as in some yellow cake mixes. The plainness and lack of sweetness also makes this cake a good canvas for your frosting of choice.

I used the chocolate frosting from the Yellow Cake with Chocolate Frosting recipe It was pretty sweet with all the confectioner’s sugar and reminded me of chocolate canned frosting (in a good way). I would agree with the recipe that it should be used right away–I let mine sit covered at room temp for an hour or so while the cake was cooling, and it dried out a bit which made it not stick as well to the cake. Adding another teaspoon or so of milk before using it would’ve helped make it more creamy and sticky, I think.

I found this cake to be delicious and actually not too sweet. It is very satisfying after dinner with a cup of tea or coffee (or for breakfast!). The combination of buttermilk and oil lends itself to a super-moist cake that is still tender (and delicious) 3 days later. (I actually think it was best the 2nd and 3rd day…even the morning of the 4th day!)

It’s definitely easy to make, all in one bowl. The only misleading part of the title that it states it a sheet cake. My understanding of a sheet cake is that it is baked in a sheet pan and a max of.

approximately 1 1/2 inches high. Not the case here. There’s plenty of batter to make it in a sheet pan, but that would then change baking time.

Now the icing. For anyone who is apprehensive about a Swiss buttercream, just take a leap of faith. Seriously. It’s so quick to make and even better to eat—straight out of the bowl or on your cake! I would gladly make this recipe again, perhaps in a sheet pan with double the frosting. That’s one place you don’t want to skimp. Using my stand mixer, after achieving stiff peaks, I whipped the butter in and had a perfect silkiness in about 7 minutes.

There was no change in texture of the cake after three-plus days. I think the flavor improved during that time.

I was really surprised that a one-bowl recipe could yield such a bouncy and moist cake. This recipe results in a great rustic yellow cake. Because the cake relies on baking soda and powder for the rise, the air bubbles in this cake definitely aren’t as uniform or delicate as a cake made with beaten or whipped eggs like a chiffon cake. Nonetheless, the cake has great texture and is very moist.

Definitely one of the best yellow cakes I’ve made, considering how easy it came together. This reminded me a little bit of Whole Foods’ yellow cake. Though I love Swiss meringue buttercream, which this recipe calls for, I would love to try this cake with a chocolate frosting next.

I’m fairly sensitive to baking soda and I could definitely taste (and feel) it in the final product. I think the next time I make this recipe, I would switch the amount of baking soda and baking powder to see if it would still yield a similarly textured cake, because I loved the texture but the flavor of baking soda was just too overwhelming for me.

I would definitely recommend this recipe to friends and family for a simple cake. There’s a bakery in Park Slope that gets rave reviews for their fluffy muffins, but I can taste so much baking soda, that I couldn’t finish eating mine. Still, the general public loves them, and I wouldn’t want to prevent anyone from making this simple and pretty foolproof cake just because of my personal taste.

I brought it to a socially distanced birthday picnic for 5 people. We all had a piece, and about 2/3 of the cake was still left over. I took half the leftovers home, and finished eating it the next day. The cake definitely got more moist by the second day (it was wrapped in plastic and left out at room temp overnight.

Definitely a keeper! The recipe itself was quick and easy. The cake was super light and fluffy without being dry. It melted in the mouth like sweet vanilla clouds! I always place the empty vanilla pods in a jar of superfine sugar and I used this vanilla sugar for the recipe for extra flavor.

Using one bowl for mixing means less washing up, which is always a plus. A small drawback was that the top of the cake was very dark when it came out and cracked. I will put in a little less baking soda and maybe have the temperature slightly cooler when I make it next time.

I was in a quandry trying to rate this recipe as it is really two recipes, the cake and the icing. I will start with what I liked the most…the cake. The cake was moist and delicious with a wonderful vanilla flavor. And best of all, this is the kind of cake that is quick, easy, and requires minimal clean up because you only use one bowl! You don’t even need to use a mixer. This is a great cake recipe on its own.

If I was looking for a quick homemade cake recipe, I would immediately be drawn to this recipe. Since this cake isn’t overly sweet, I think it would work well with an American buttercream which is what I would use. Another thing that I wouldn’t do is line the pan with parchment paper and remove the cake from the pan. I would leave it in the pan and only cut each cake piece as needed. I think this aids in preventing the cake from drying out if it lasts for a few days.