Pompeii dig uncovers a fast food court and ancient tastes explores how a recent excavation of an ancient food stall in Pompeii proves to us that takeout is, indeed, an essential human need. And has been for centuries. 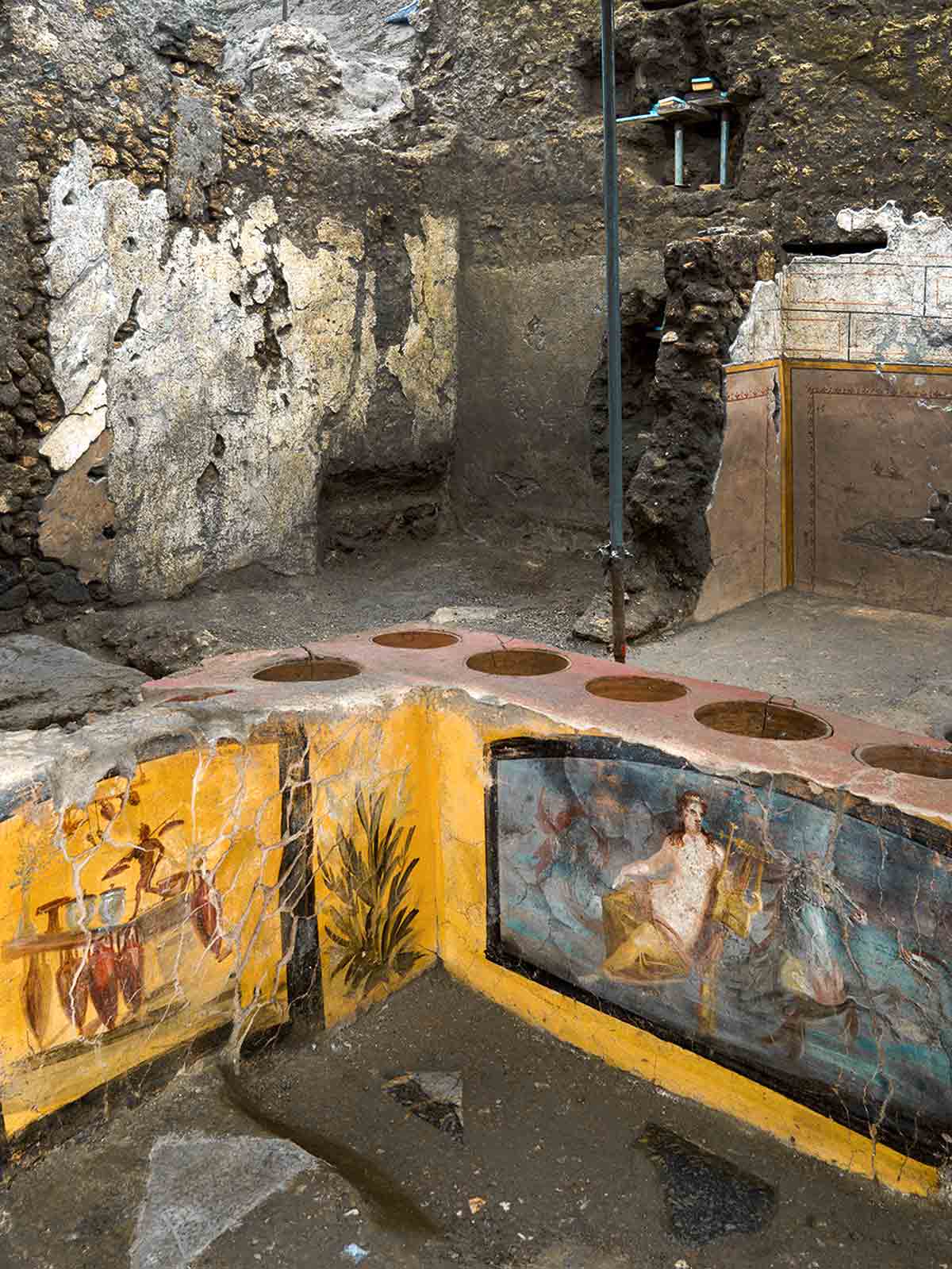 Hidden for some 2000 years, a recently unearthed food stand in Pompeii suggests that perhaps we’ve all been a little smug in thinking we’re the original takeout culture.

In 1748, centuries after the nearby volcano of Mount Vesuvius erupted and buried the town in ash, archeologists began excavating Pompeii and have since uncovered some 80 thermopolia, which literally means “a place where something hot is sold.” These ancient precursors to restaurants existed throughout the ancient Roman world. However, what makes this most recently excavated ruin especially noteworthy and exquisite is the level of detail preserved over time compared to previously discovered ruins, thereby providing even more clues about how people used to eat on the go.

The exceptionally well-preserved excavation site, known as Regio V, offers “another insight into daily life at Pompeii,” said Massimo Osanna, the departing director of the Archaeological Park of Pompeii, in a statement released on December 26th. Vibrant and beautiful homages of nymphs and gladiators, roosters and ducks can all be found in the surviving frescoes that cover most of the flat surfaces, not exactly unlike the artistic creations witnessed on food trucks today. With the menu before them in painting, customers could easily choose what they wanted at a glance. 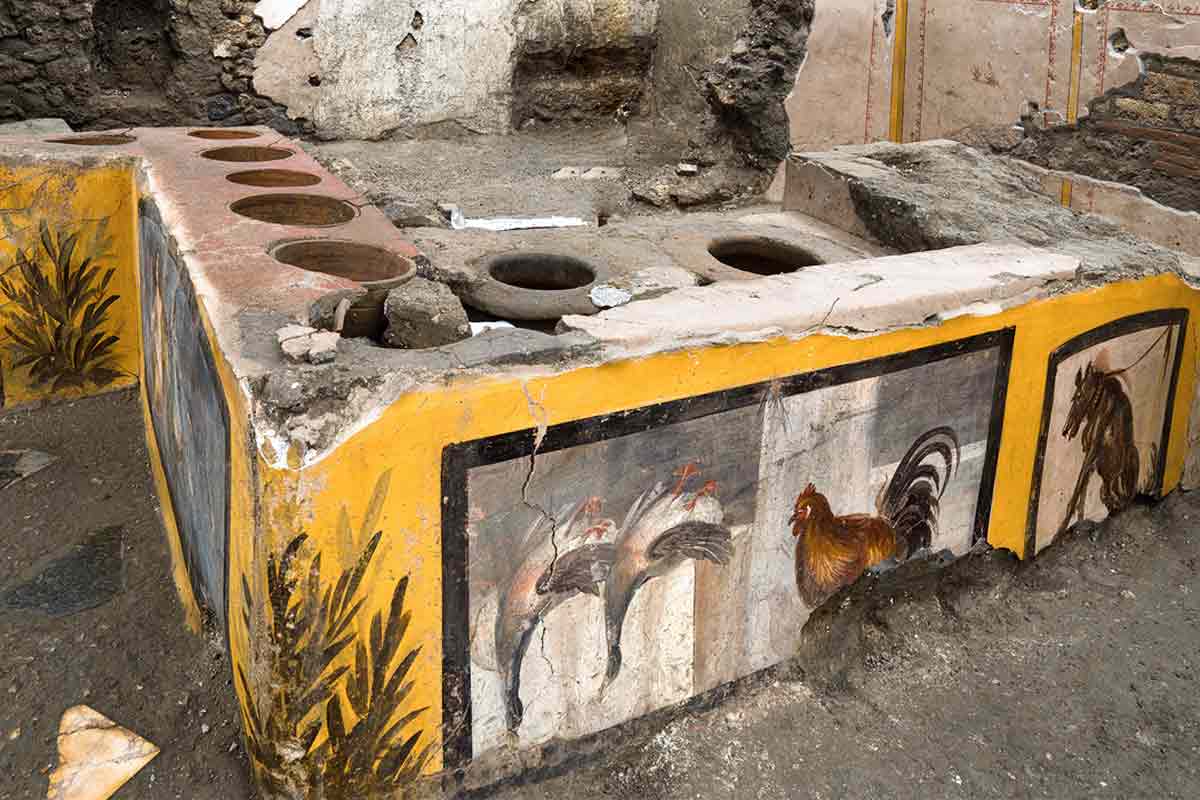 Food was served from terracotta jars, called dolia, that were situated in the circular holes built into the counters. Human remains were found at the site as well. (Though the bones are often assumed to be those of a thief, taking advantage of everyone fleeing to help himself, we like to pretend it’s a chef immortalized, fittingly, with an arm extended in a gesture of giving.) 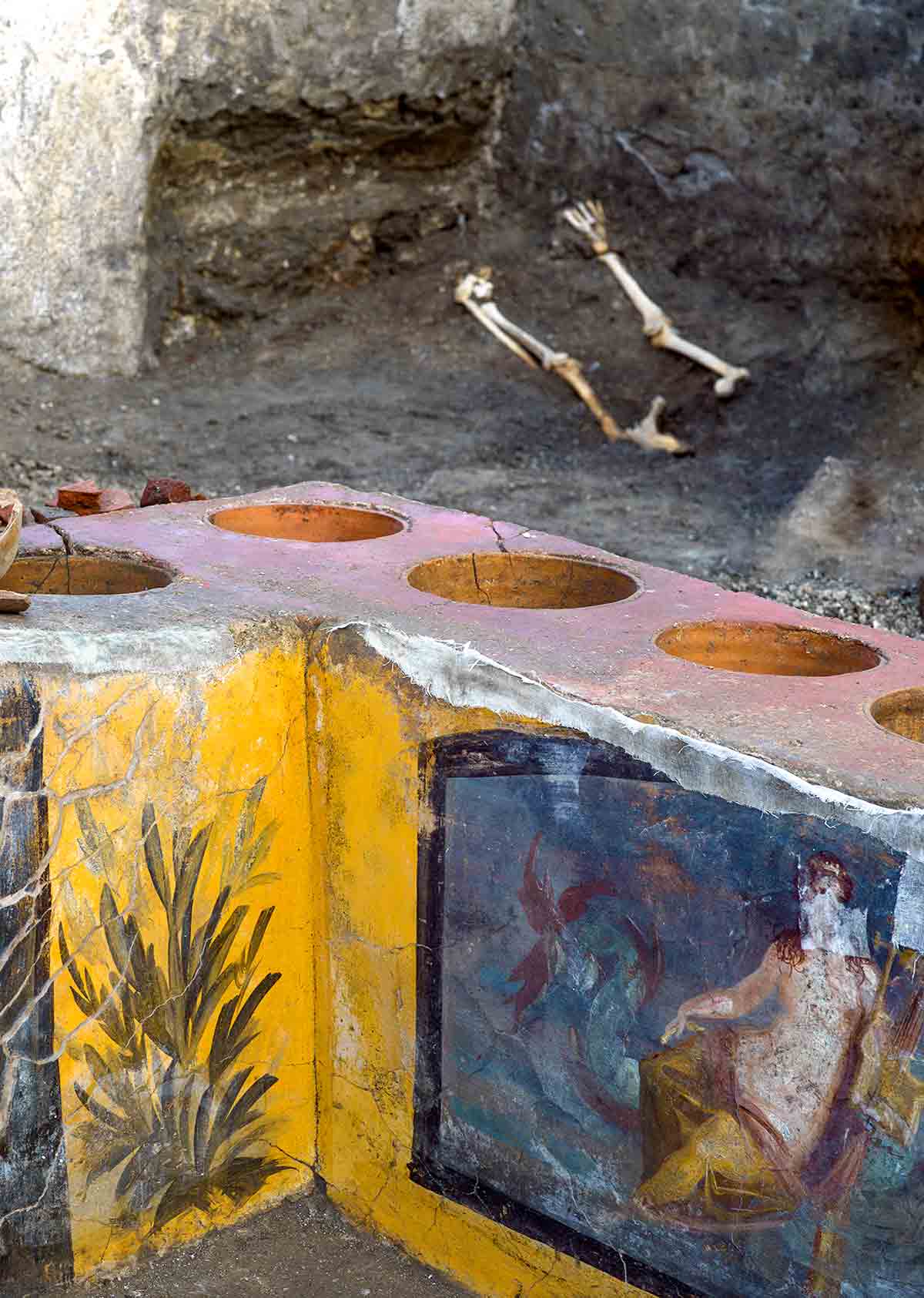 Valeria Amoretti, a site anthropologist, said traces of 2000-year-old remnants of pork, goat, fish, snails, and beef had been found in the vessels as well as nearby duck bone fragments, presumably from ducks that were waiting to be butchered.

Most Pompeiians with below-average income rarely had a place to cook at home and relied on thermopolia to stay fed, though the food stalls were also popular with the toga-clad wealthy, who occasionally sent a servant to bring back paella-style sustenance. The majority of food stalls were designed for takeout or eating at the counter although a handful had a back room or eat-in area. There’s also evidence of wine, making the likely scene at these food stalls even more interesting. Stephanie Butler of history.com writes that “despite, or perhaps because of their ubiquity, the thermopolia had a bad reputation. Criminals and heavy drinkers often hung out there.” As such, the emperor Claudius banned them for a period of time but later relented.

Thermopolia were most commonly found in densely populated parts of Pompeii and while there is no proof for assertions that perhaps there was drive-thru service for wagons or chariots, the site is still undergoing excavation, so additional food discoveries and insights remain possible. Until then, rest assured, the need for takeout is a more time-honored and shared tradition than perhaps you’d imagined.

For additional information, consult the Archaeological Park of Pompeii.