This homemade cream of mushroom soup is easy to make in the pressure cooker or Instant Pot, with mushrooms, onion, garlic, and plant-based milk So long, canned soup.

This is a thick soup designed to replace canned store-bought condensed cream of mushroom soup, so you can continue to make all of your family’s favorite casseroles without worrying about what’s actually in the food you’re consuming! Use this to replace canned condensed soup 1:1. It will freeze well for up to 12 months. You can measure it out and freeze it in a muffin tin, then pop out the pucks and store them in an airtight container or freezer bag, removing portions as you need them.–Brittany Williams 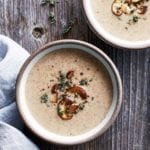 Big payoff for the effort with this recipe! I don’t usually buy canned cream of mushroom soup because of the high sodium, preservatives, and lack of flavor. This will become a staple for me.

This time I used it simply for soup, but it would be a great addition to casseroles and such due to the rich flavor. I used a combination of button and cremini mushrooms, which gave it great flavor. I did expect it to be a bit thicker for a condensed soup base, but it could be thickened if necessary. It was thick enough that I added additional almond milk to use it as soup. Although this is a pressure cooker recipe, I think it could be easily adapted for a slow cooker or even stove top.

My husband prides himself on his homemade soups, so the bar was high and he loved it! Served with homemade sourdough crackers and a mixed green salad it was a great light supper for a cold evening.

My family pokes fun at me because canned soup is not allowed in my house. They have long lamented the absence of casseroles and crock pot dinners that revolve around opening a can of cream of mushroom soup, the things we grew up on. I simply prefer not to have the BPA-laden cans and the MSG and sodium. When I saw this recipe, I knew it was the answer.

I used button mushrooms because it was all that was available in my local store around Thanksgiving. However, I wasn’t disappointed in the flavor that came from those simple mushrooms and other straightforward ingredients. Quick tip? I was in a hurry and threw my onion in the food processor to chop it. Don’t do it! It releases a lot of liquid and while it did substantially cook out, it was touch-and-go for a few minutes.

I chose to use cornstarch and almond milk. Now that I’ve learned that I can use almond milk and freeze it, I’ll be experimenting with subbing almond milk in a lot of my recipes that I’d love to be able to pop into the freezer.

Also, if you don’t have an immersion blender, you need one. Every time I encounter something like this, I’m so grateful for mine. Who wants to drag out a big blender and set it up for just a few minutes of blending? I was unsure what the texture would be like given the almond milk and chopped onion, but it was silky and decadent.

Even better – I put this to the test three ways. I used it to make a classic tuna casserole, a take on chicken and rice with leftover Thanksgiving turkey, and then I had the remainder on a cold day for a light lunch. It exceeded my expectations in all three instances. Guess what, family? You’ll actually see green bean casserole on the table for Christmas, thanks to this recipe!

Really delicious recipe! I substituted arrowroot with cornstarch and used soy milk. I got 3 portions out of this recipe. I served it with sauteed mushrooms on top and bread crumbs on the side. Topping finishes the dish and it can be eaten as is.