What are Jerusalem Artichokes? 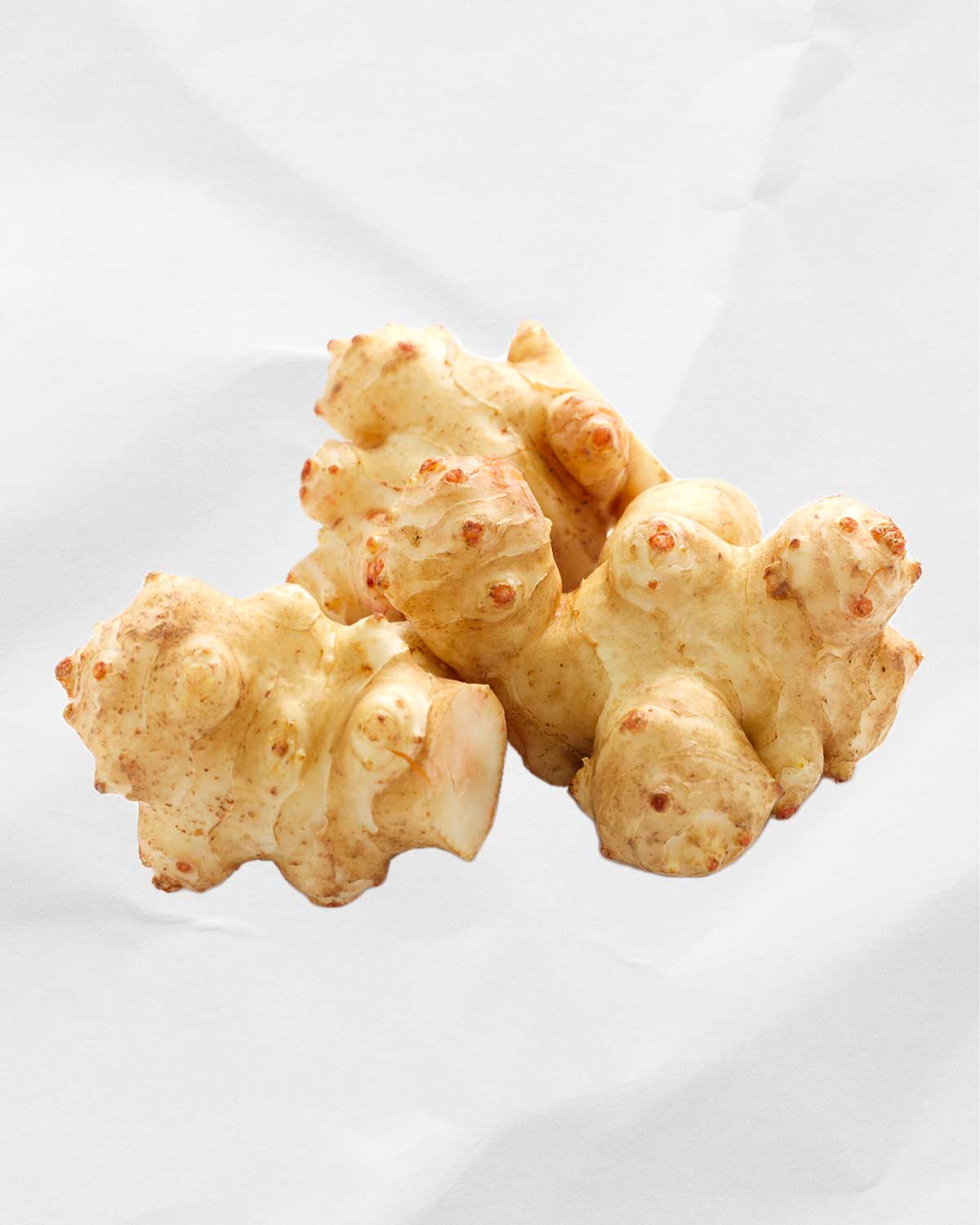 What the heck are Jerusalem artichokes, anyway? They’re not from Jerusalem and they’re not artichokes. To further confound and confuse, they’re also known by the name of sunchokes.

And yet there they are in the farmers market or produce aisle, usually heaped rather forlornly high, dejectedly, no one pawing through the piles with giddy anticipation.

What a mistake that is.

Jerusalem artichokes are the edible sweet tuber of an Italian sunflower and resemble ginger root. Though somewhat starchy like potatoes, they have a crisper texture, more like water chestnuts, and a nutty, sweet flavor that’s accentuated when roasted. They’re in season from the fall through spring and, as is fitting with so many winter ingredients, are used as a root vegetable. And though they are satisfyingly hearty like potatoes, they contain more minerals and iron than potatoes but with a lower glycemic index. They’re also one of the much ballyhooed prebiotic foods we’ve heard so much about in recent years.

How to select Jerusalem artichokes

Look for specimens that are quite firm. Beware of any soft spots or sprouts that feel mushy.  Their appearance can vary from having a thin, almost paper-ish skin with maybe a tinge of pink to something more closely resembling the studier ginger root. (Because Jerusalem artichokes are still relatively unknown, they often sit around long enough in the store and become mushy and moldy.)

How to cook Jerusalem artichokes

Preparing Jerusalem artichokes couldn’t be easier. It’s the peeling that can be tricky given all those knobs and nooks and crannies. Pro tip: You can actually omit the peeling and give them a good scrub instead. (However you encounter them, their skin is edible, so don’t work too hard peeling them.) Instead, spend your time scrubbing them. The knobbier they are, the more you want to make sure you get every last bit of dirt off of them, as they’re a root vegetable and come from the ground.

You could eat them raw if you wanted to, though most of us are partial to the simplicity of using them just as you would potatoes. There is perhaps no more rousing approach than to toss roasted Jerusalem artichokes (or sunchokes) with a little salt, pepper, and olive oil. (Though most of us who’ve cooked for kids know they’ll never get away with serving them that way as they were quite averse to any foods that had even the slightest appearance of being “weird.”)

They’re also quite commonly steamed or pureed or added to soups.

Another favorite way to prepare them is to take cleaned and trimmed little sunchokes, boil them in salted water just until tender, smash them, and then toss with some butter for richness along with some fresh parsley or thyme.

If you’re feeling really ambitious, take a mandoline or handheld slicer to them and fry them up as a healthier version of potato chips. Don’t forget a sprinkle of salt.

How to save yourself embarrassment after eating Jerusalem artichokes

As charming as they can be, Jerusalem artichokes have been known to cause a little stomach upset, which could prove quite embarrassing in the company of others. Moderation is recommended, especially if this is your first time.

© 2021 Lisa Bennett. All rights reserved. All materials used with permission.

Back to What are Jerusalem Artichokes? on Leite's Culinaria