As with fried chicken or barbecue in the South, the finer points of making clear-broth clam chowder inspire intense debate among Rhode Islanders. The question of whether it’s best to chop, mince, or grind the clams can prompt arguments so impassioned, a full-blown melée complete with quahogs pinging off foreheads isn’t out of the question. Purists insist salt pork is the only acceptable fat. Others thwart tradition and use vegetable oil, bacon, or butter. Varying opinions about the proper size of potato cubes abound. A dash or two of Worcestershire sauce is hailed by some, disdained by others. And in certain quarters, the mere mention of fresh herbs can trigger a level of scorn usually reserved for Yankees fans in this decidedly Red Sox-obsessed state. You decide.–Linda Beaulieu 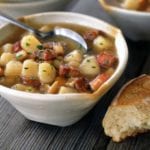 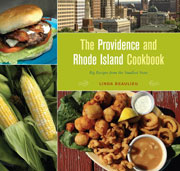