This slow cooker Indian-style chicken marinates chicken thighs in spiced yogurt and then cooks it with tomatoes and Indian spices. Think of it as a short-cut chicken tikka masala.

There are many theories for how chicken tikka masala came about. One is that a Bangladeshi-British chef in the United Kingdom came up with the idea to add tomatoes and cream to the original tandoor-cooked chicken and masala. Regardless, the popularity of chicken tikka masala in the West, especially in Great Britain, is indisputable. I modified the recipe for the slow cooker and eliminated the step of first grilling the chicken. It still tastes great. If you prefer, grill the chicken before adding it. But try it my way first—you may just find you like it and don’t want to bother with the extra step.–Anupy Singla 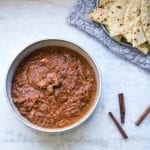 How Can I Make This In A Smaller Slow Cooker??

To make this dish in a 3 1/2-quart slow cooker, halve all the ingredients and proceed with the recipe. Marinate for at least 2 hours, then cook on high until tender, 6 to 8 hours. A half recipe makes 8 cups.

This was fabulous! My boyfriend is from Essex just outside of London and his favorite dish is chicken tikka masala so when I saw this as a test recipe I knew that I had to make it and it didn’t disappoint. It had a lot of depth in flavor and I can see how easy it is to adjust the spiciness level without changing the flavor of the dish.

Some of my past attempts of making chicken tikka masala resulted in a dish that was just hot or too bland. We like spicy dishes but we don’t want to lose the actual flavor of the dish and this recipe was “spot on” (as my boyfriend would say). This is a keeper! I made the full recipe and this could easily have served 8 people, especially if serving with naan and rice.

We’ve enjoyed chicken tikka masala in restaurants but I never made it at home before testing this recipe. I’m including this recipe in my “Go-To” file because the results were delicious, preparation is easy, and the house smelled of warm spices!

I used boneless skinless chicken thighs which are better suited to long, slow cooking than chicken breasts. I substituted a 28 – ounce can of drained San Marzano tomatoes for the 6 fresh tomatoes and pulsed them very slightly in the food processor. I didn’t add the almonds but might try that next time. I decided to try the optional step of browning the marinated chicken thighs. I’m glad I did because the crispier texture of the thighs and warmth of the cooked spices were a nice touch.

My chicken was tender after 6 hours in the slow cooker. I didn’t remove the lid to allow the sauce to thicken as it seemed thick enough, even though I added the marinade to the masala. If you aren’t into slow cookers, this dish translates well to Dutch oven cooking.

The finished dish was eaten with joy served alongside steamed Basmati Rice and green beans sautéed in olive oil and shallots (and I have amazing leftovers in the refrigerator).

I’m a dinosaur. I’m resistant to innovation. I’ve bought and returned, gifted or sold, a myriad of small kitchen electrics. Ok—I’ve kept a few—like toasters, food processors and stand mixers. I try to resist the latest and greatest and so far haven’t succumbed to an air fryer. I don’t really fry anything to begin with.

The one newish thing I have kept is a slow cooker. This pandemic has called me to pull it out often, especially this winter; soups, stews and anything that my French enameled ware could tackle is worth a go. Kitchen perfumes are always welcome!

And so I tried the chicken tikka masala and was not disappointed. Using my 6-quart slow cooker, it easily came together in a 2-step process, which I love: prepping the night before by cutting the chicken and mixing the marinade made for a later rise in the morning. I also completed mis-en-place that evening with the spices, but waited to chop the onions and garlic. All was easily processed the next morning.

The results were delicious. I am always so very happy when I remove chicken after such a long, slow steep and it’s STILL JUICY and wonderfully flavorful. This did not disappoint. I served it with brown basmati rice, tossed greens, and naan bread.

I’ll admit I was a little intimidated by this recipe, 28 ingredients and some I was not very familiar with, but I decided to give it a try and I’m glad I did. I like that it was made using the slow cooker, the aroma permeating the house on a cold snowy day was just perfect.

I marinated the chicken overnight using just boneless chicken breasts. My family doesn’t like super spicy food, so I only used 1 teaspoon of cayenne pepper in the marinade. The marinade was thick and coated the chicken and I imagine would be good for many dishes. The masala was simple to prepare in the food processor, just a quick chop of the vegetables before adding the rest of the ingredients to the food processor was so quick and easy.

Again, since my family doesn’t like things too spicy, I only used 3 serranos and reduced the cayenne, but wish I had cut back even more. Adding the cream at the end helped cut the heat but it was still too spicy for our tastes, overpowering the other flavors. I made naan which was nice for soaking up the sauce.

I have managed to get 10 servings out of this curry, with bread or rice as an accompaniment. I thought the finished dish looked very professional—like many a curry I’ve bought in a restaurant or supermarket.

The chicken was tender but still held together after the cooking. The pieces of chicken were quite large and I found myself tasting it and looking for another large piece of chicken to test. The flavor was spicy without being overly hot. The texture was quite rough, presumably because of the ground nuts, which I also thought made the curry look more authentic. I didn’t try grilling the chicken after marinating it. I would make the recipe again and would recommend it to others.

I added the excess marinade to the cooking pot, which gave the chicken pieces plenty of sauce to cook in for 8 hours without danger of it burning dry. I didn’t remove the lid for the last hour of cooking and so I ended up with plenty of sauce which I could mop up with bread and rice.