When Pizza Hut launched its newest addition to the menu and called it Detroit-style, a lot of folks asked, “What’s Detroit-style pizza”? Turns out it’s actually a thing. We explain how to recognize it and why you need to try it. 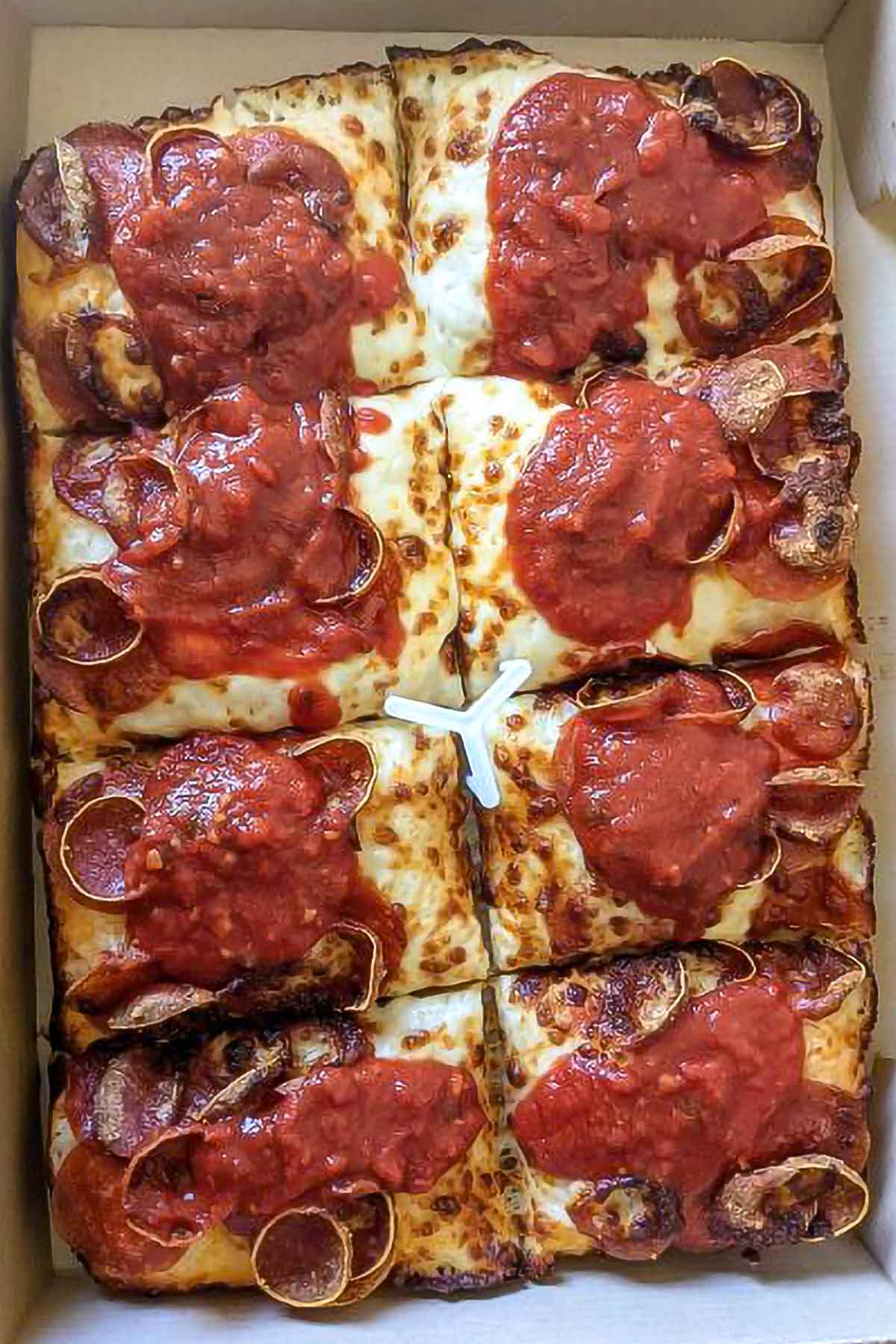 We are a culture of very strong feelings about what constitutes pizza, perhaps no better exemplified than Jon Stewart’s infamous takedown of Chicago’s iconic deep dish pizza. So it should come as no surprise that when Pizza Hut announced they were launching a collection of  “Detroit-style” pizzas, the Internet was going to have some feelings about it. Reactions ran the gamut from excitement about having a hometown favorite get national recognition, to disgust at having tomato sauce appear above the toppings, and just about everything in between.

One of the most common reactions, however, was confusion, with even some native-Detroiters not knowing what it was. This approach to pizza isn’t just some corporate-created stunt, but rather it’s a fascinating tomato-sauced part of regional American food history. 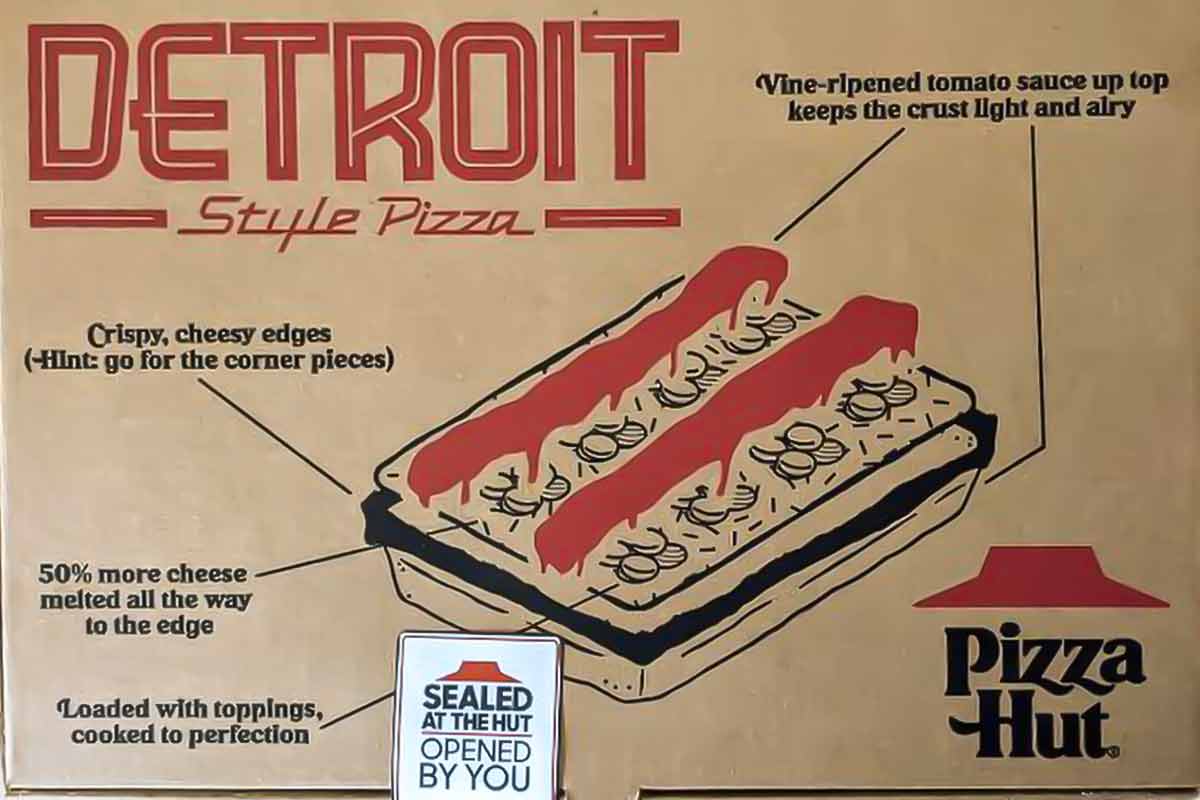 The pizza in question originated in 1946 at Buddy’s Rendezvous (now known as Buddy’s Pizza) in Detroit, which opened during Prohibition as a speakeasy. While there’s some dispute as to the origins of the Buddy’s recipe, it was heavily influenced by Connie Piccinato, one of the employees at the time. She insisted the pepperoni be pressed into the dough, as her family had done back in Sicily. With kitchen supplies, including baking pans, hard to come by after World War II, Buddy’s made history by utilizing blue steel drip pans from automotive stores, putting a very Motor City touch on their pies. Blue steel’s remarkable heat transfer rates led to the pizza’s signature crisp edges and its durability means several of the original pans are still in use at Buddy’s today.

Hallmarks of a Detroit-style pizza include a fluffy, focaccia-like dough that’s pressed into a metal pan slicked with oil to ensure a crisp crust. The cheese (traditionally Wisconsin Brick) is cut into cubes or crumbled, never shredded, and the cheesy expansiveness stretches all the way to the edges of the pan. The pie remains in the oven until the perimeter cheese touching the pan just starts to char, resulting in a caramelized crust that causes fights to break out over the corner pieces. Pepperoni is first pressed into the crust beneath the cheese layer, followed by any other toppings and stripes of sauce. 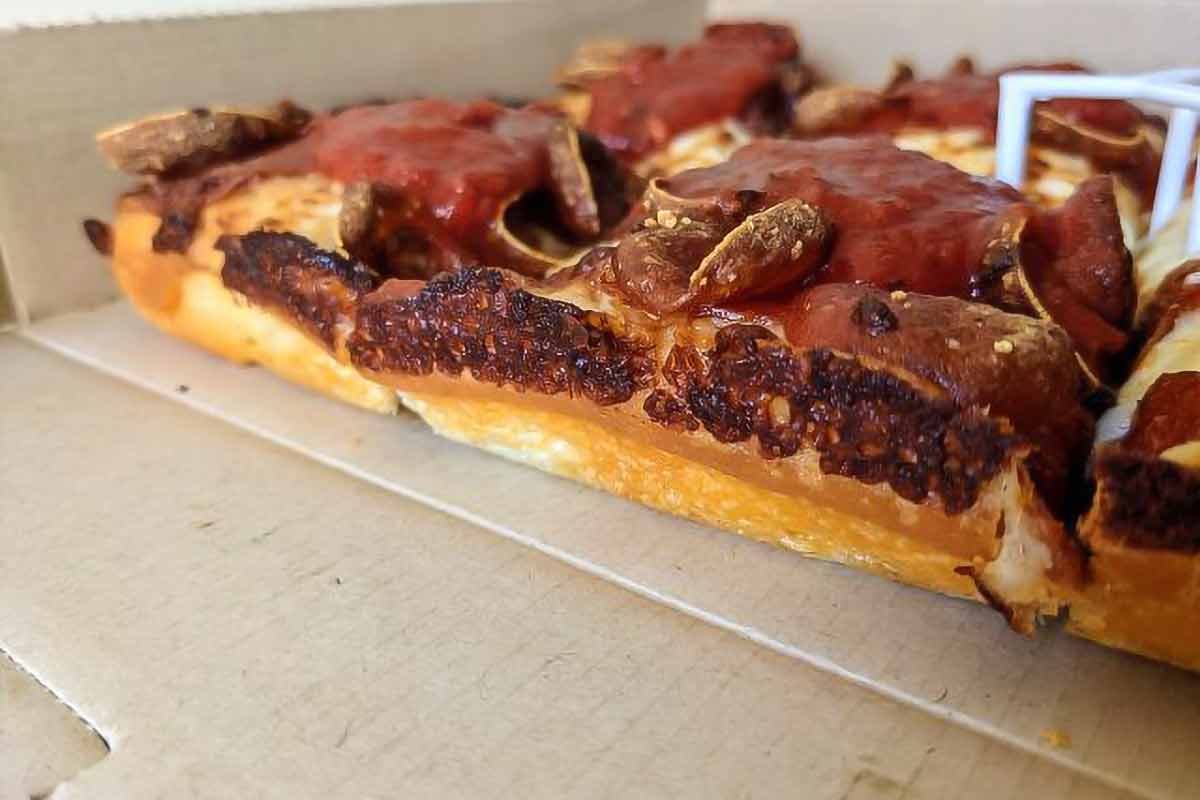 While this style of pizza continued to gain popularity around the Detroit area, it didn’t extend far beyond the city limits until Detroit native Shawn Randazzo won the 2012 Las Vegas International Pizza Expo championship with his hometown’s signature pie. He started training others in the pizza industry to make it and since then it can be found in restaurants across the world, including Thailand and South Korea. Pizza Hut isn’t the only chain looking to explore this underappreciated frontier. Little Caesars was first on the Detroit pizza scene, introducing their “Deep!Deep!Dish” pizza in 2013.

So, does this mean you should rush to place an order with your local Pizza Hut and give it a try? Well, so far the reviews are rather middling, and Chris Powers, co-founder of Ivy and Coney’s in Washington D.C., probably put it best saying, “Anyone who grew up in Detroit would probably be offended.” Fortunately, those who don’t live near the Motor City can enjoy authentic Buddy’s Pizza anywhere in the US, because they ship frozen half-baked pies that you finish off in your home oven. However, you don’t need to rely on takeout to get a taste of this rectangular pie since it’s something you can make at home, no pizza stone required. King Arthur Baking company released their rendition of Detroit pizza last year that, while it works best in a metal pan, will also bring you very similar results in a 9-by-13-inch baking dish. We know what we’ll be making this weekend.

Back to What is Detroit-Style Pizza—a Nation Wonders After Pizza Hut Launches a New Menu Item. on Leite's Culinaria