The brand Kraft has launched a new mac and cheese in time for Valentine’s Day and it’s shockingly, vibrantly, unmistakably pink. And flavored to taste like candy. We explain what the thinking was behind the latest in their line of products. 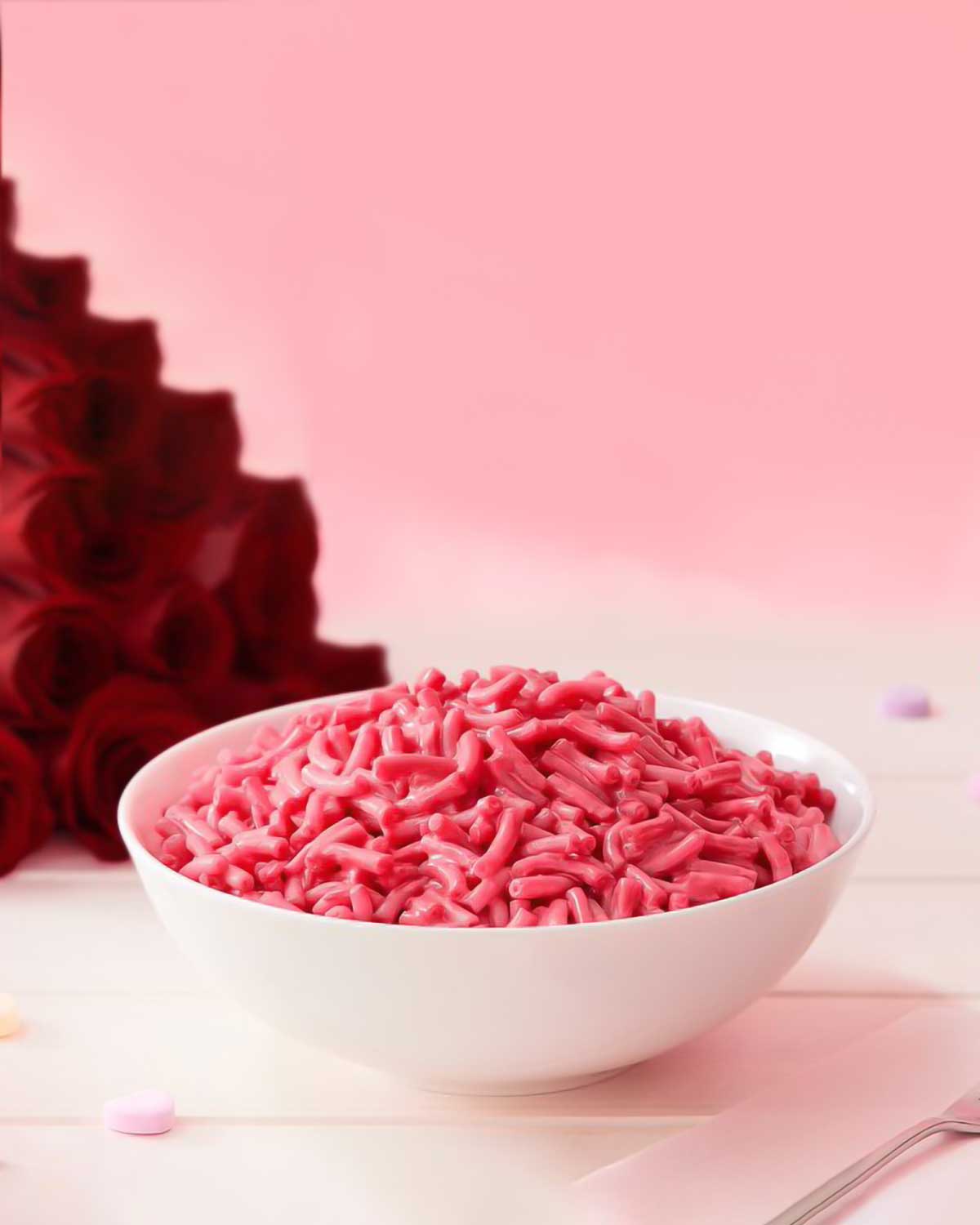 : Candy KD
You already know, perhaps intimately, the love affair nearly every kid (and, heck, a lot of adults) have with the typically neon-orange pasta that’s ready in minutes. That iconic shade got a glow-up just for Valentine’s Day with a rosy pink color and a touch of sweet candy flavor.

That’s right. You can tell someone you really care about them with a box of candied carbs in the most eye-watering shade you can imagine. And what could be better than adding another couple of weird ingredients to the already mile-long list of unpronounceable things on that classic blue box? Apparently stir-in “candy packet” that’s basically fructose and vanilla. Because pasta always needs more sugar.

“No more noodling on what gift to buy,” stated the company in a press release. “There is no better way to show your love this Valentine’s Day than saying ‘you’re the mac to my cheese.'”

Uh. Maybe. Or you could just give them a box of spiders.

Kraft has been expanding its boxed cheesy macaroni line for years, but they’ve only recently gotten into the more unusual flavors. “After our success with Pumpkin Spice Kraft Mac & Cheese in the fall, we had our eye on what to do next,” explained Martina Davis, brand manager at Kraft Heinz. “We’re always up for a challenge, so for Valentine’s Day we thought it would be fun to change the color AND taste of classic Mac & Cheese by turning it pink and adding a bit of sweet candy flavor to celebrate the holiday.”

Only 1,000 boxes were available in the United States and another 1,000 in Canada. To acquire the cheesy pink collector’s item, customers were asked by Kraft to sweet talk @kraftmacncheese into sending them a box. That’s right. A contest. The romantic reminder of your broke and hungover college days was reserved for people who shared their best pick-up lines or love poems across Kraft’s social channels in a romance-themed promotion that ended February 10th. (Not that you wanted to enter. There are other ways to satisfy your macaroni and cheese craving that won’t stain your teeth or give you weird dreams.)

Some contestants upped their pun game for a chance to win with tweets like “Wanna spoon?” and “You’re the macaronly one for me.” Evidence, perhaps, that there are truly two types of people in the world.

Not a lotta love

Despite the number of entries, the greater public response hasn’t been overwhelmingly supportive, even in Canada, where the gooey, cheesy staple known as Kraft Dinner (KD) is considered almost as sacred as poutine and butter tarts and defiling KD is tantamount to an unpatriotic act. While Kraft’s Twitter page is full of people bending like elbow noodles to get a box, not everyone’s pulse quickens at the notion. “Time to start humanity over again from scratch,” one angry Twitter user groused in response to the announcement. Grandmothers expressed dismay and concern that the product had reached its nutritional low point. Without reciting the full litany of loathing here, we can simply report that Twitter was an outlet for a considerable amount of disappointment. 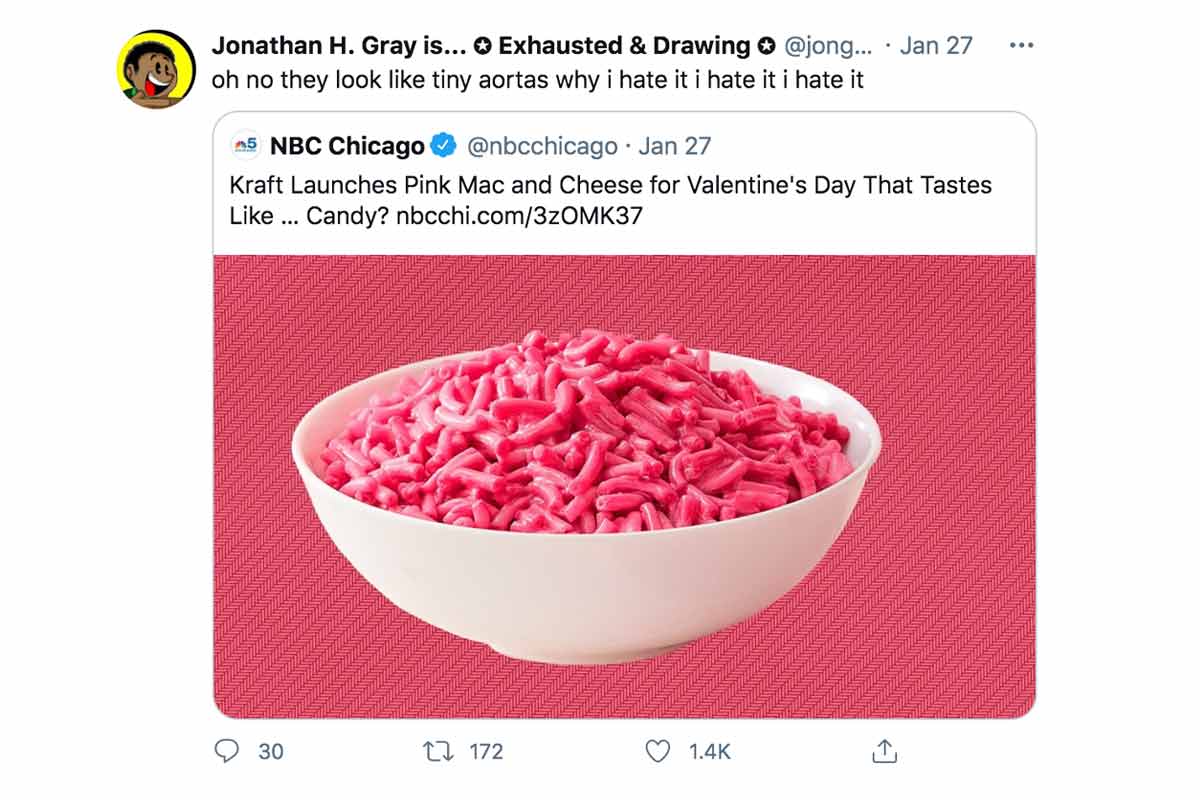 Lucky recipients (perhaps in a “you’re lucky that shark only ripped off one of your legs…” sorta way) received a candy-styled box in the shape of a giant conversation heart containing the ’80s hot pink dinner in time for Valentine’s Day. Fork included. But only one…because good luck finding someone to help eat it?

While it’s not something we’d choose to eat, we do respect the passion this has invoked in food lovers both pro-pink and against. Kraft has divulged that it distributed all boxes of the magenta devil before the holiday. If there’s a stockpile somewhere, the company is keeping quiet like a 5-year-old with a mouthful of powdered cheese product. As with the pumpkin spice drop last fall, it’s assumed the flavor will see an in-store release next year if the reviews are sufficiently favorable.