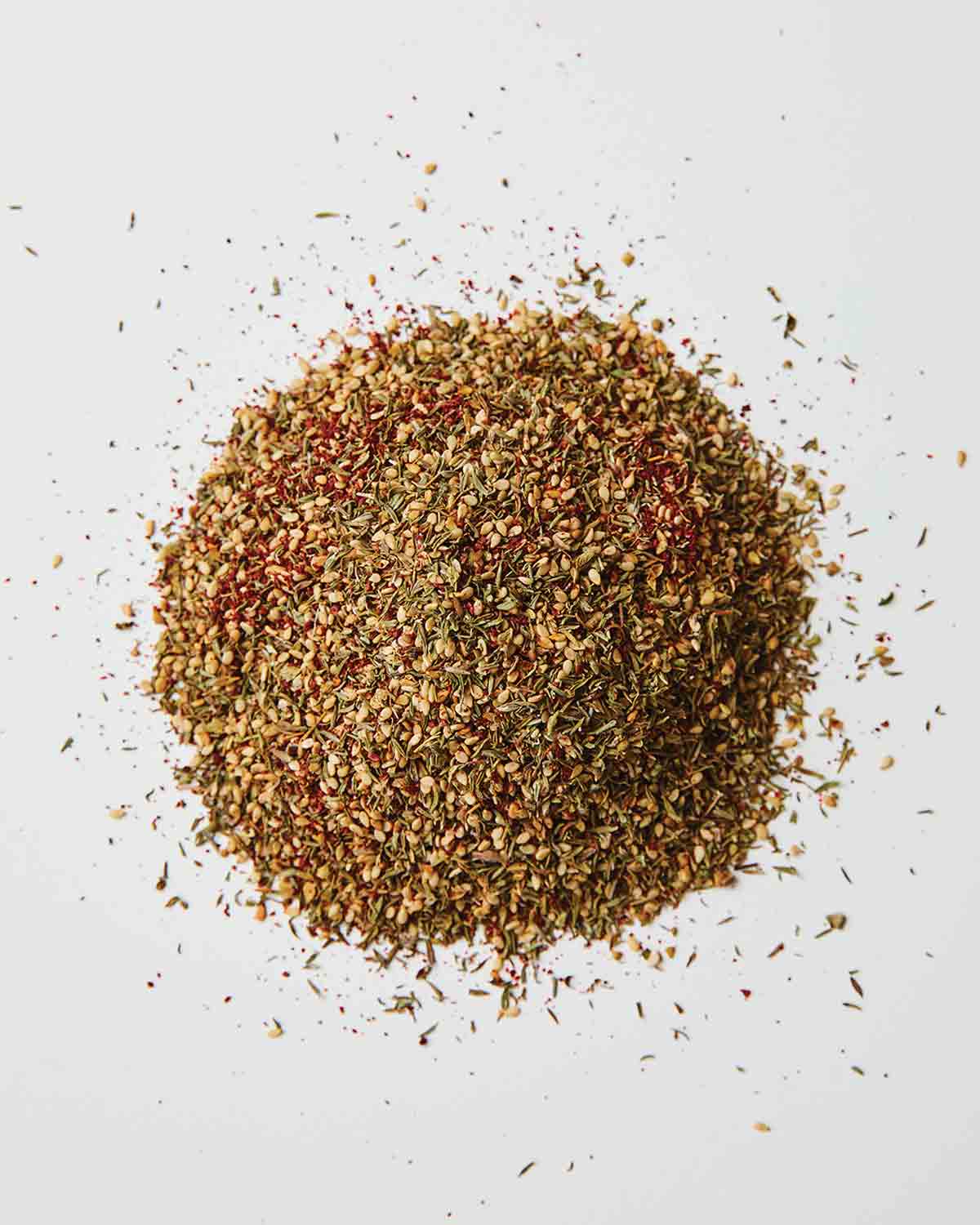 Ever marveled over a Middle Eastern dish with a vibrant yet earthy flavor and wondered, “What is this magic?!”

Then you’ve experienced za’atar. Fragrant, bright, and slightly nutty, the spice mix known as za’atar (pronounced za-ah-tar) is showing up in all manner of dishes across the world.

It’s fairly easy to roll the multifaceted blend of spices around in the mouth and identify the predominant flavors of oregano, thyme, and sesame seeds. And those of you with more nuanced palettes may pick up the subtle presence of marjoram. But the secret star of za’atar is sumac.

Relatively rare in Western cooking, this spice comes from the deep red berries of the Middle Eastern sumac bush (and is distinct from the poisonous kind of sumac that you may have encountered in the woods and gotten an itchy rash from as a result). When dried and ground, the resulting coarse powder has a tangy flavor similar to lemon but with less tartness. 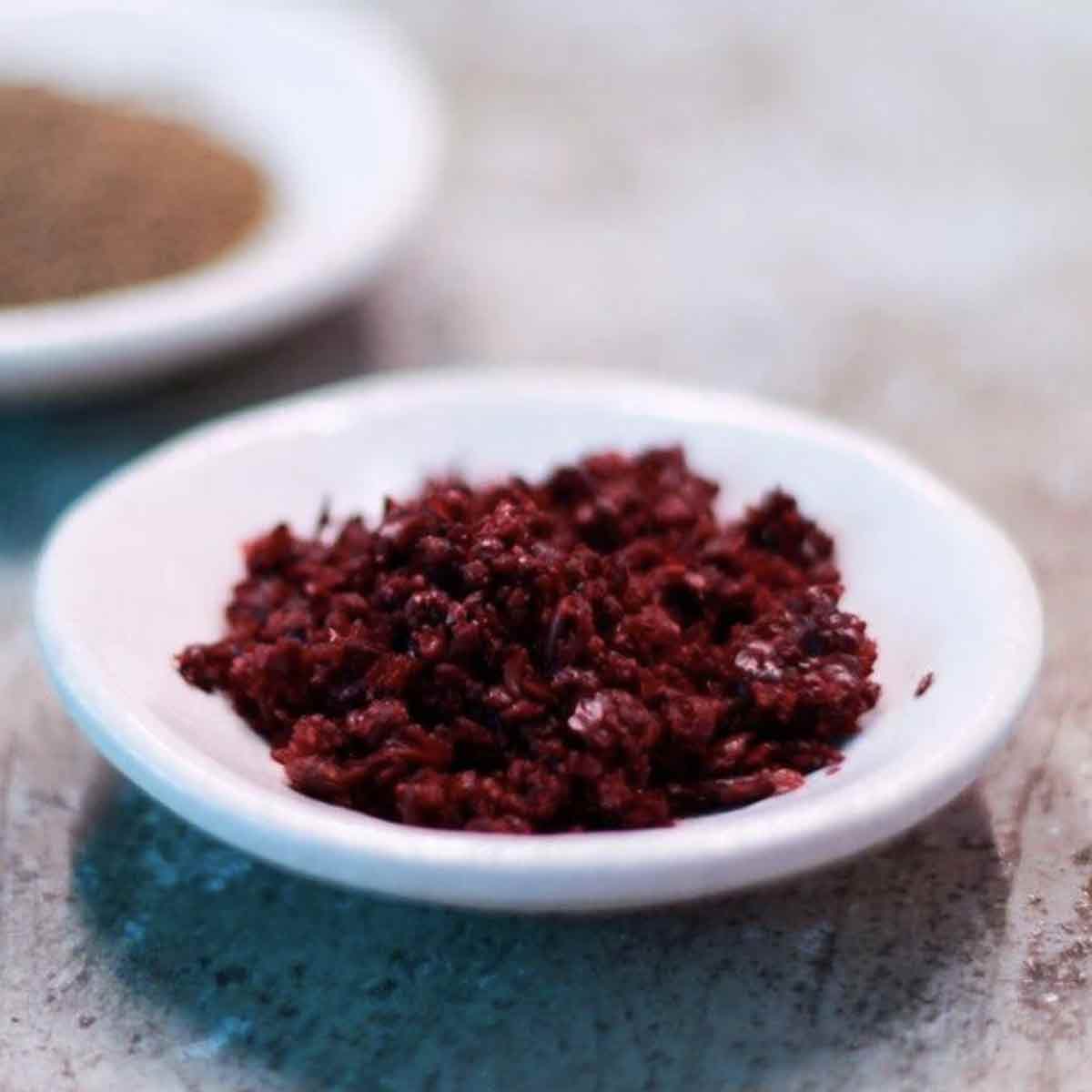 Somewhat confusingly, the spice mix called za’atar that we use here in the U.S. typically does not contain actual dried za’atar leaves, relying instead on dried oregano and thyme. Lebanese za’atar farmers would consider this incorrect, insisting that the mix include only dried za’atar herb, sumac, sesame seeds, and salt.

The herb plant za’atar, scientifically called Origanum syriacum and sometimes referred to as Syrian oregano, is a short shrub with small white flowers and very fragrant, cottony leaves. It’s believed to be the same as what the Bible calls hyssop, an herb used for ceremonial purposes. (Fresh za’atar leaves, by the way, make an excellent salad, popular in the Levant, when served with fresh thyme, finely chopped onions, garlic, lemon juice, olive oil, and salt.)

How is za’atar traditionally used in cooking?

The owner of Brooklyn’s celebrated Tanoreen restaurant, chef Rawia Bishara, explains, “On my family’s breakfast table there always was–and still is and probably always will be–a dish of za’atar next to one of olive oil and a plate piled high with warm Arabic bread. There is perhaps no more delicious a way to start the day than tearing a piece of bread from the loaf, dunking it first in fruity olive oil, and then dipping it in za’atar mix.”

Bishara recalls the Nazareth traditions of her youth in her cookbook Olives, Lemons & Za’atar: The Best Middle Eastern Home Cooking, saying of the ubiquitous spice blend, “I so love this vibrant mix of wild thyme and oregano, lemony sumac, and toasted sesame seeds that I ate it by the spoonful when I was pregnant with my children.”

Some of the countless traditional uses for za’atar include stirring it into Greek yogurt as a healthy dip, sprinkling it on flatbread and drizzling with oil for a satisfying snack, and seasoning lamb or chicken with it for a Lebanese-style nosh. 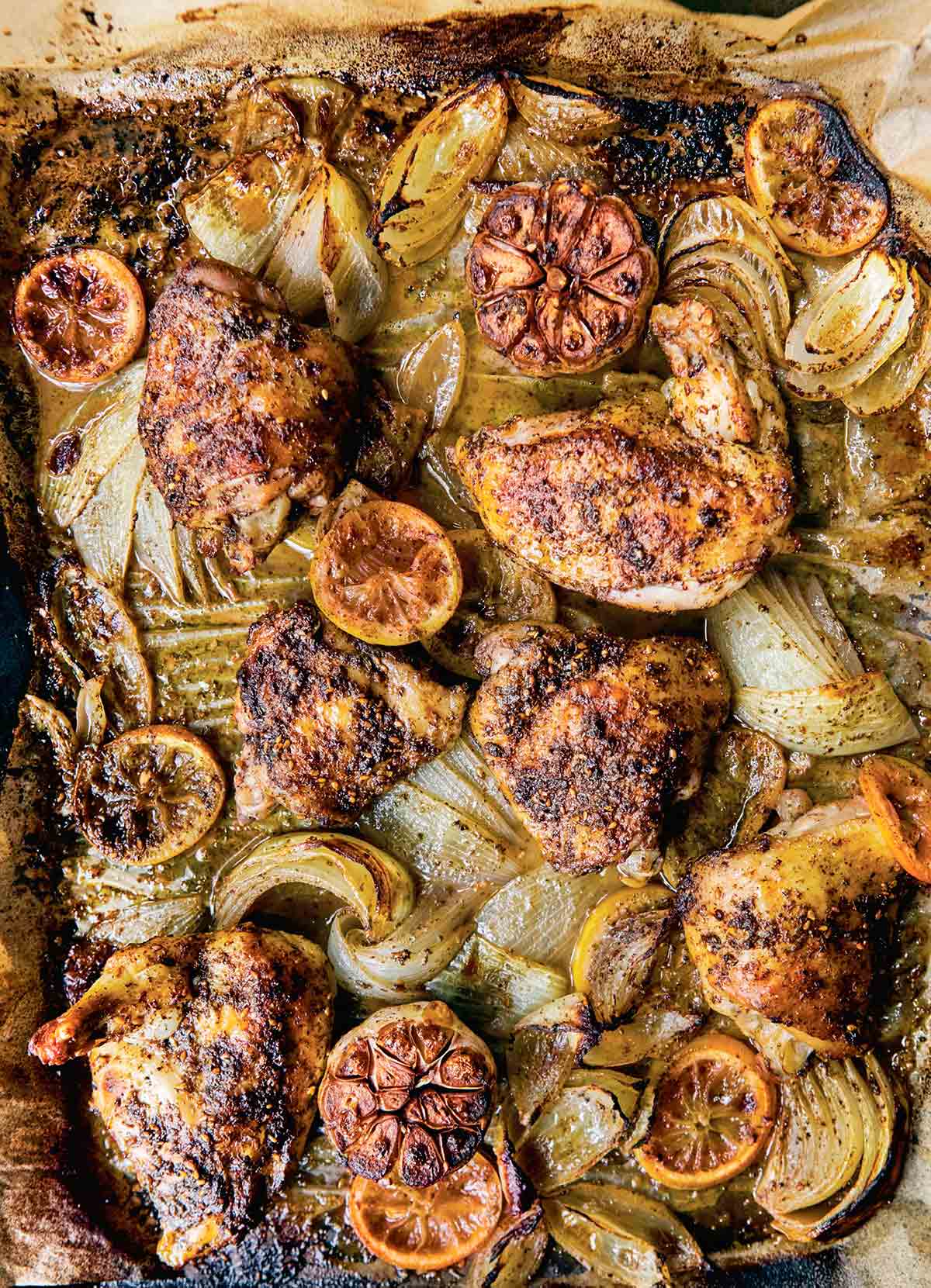 As Middle Eastern cooking has grown in popularity beyond the Levant region, cookbooks and restaurants celebrating the cuisine abound–and with them, dishes that showcase za’atar. In one of the best cookbooks of 2020, Falastin: A Cookbook, London-based Ottolenghi restaurants’ executive chef and partner Sami Tamimi gives a soulful tour of Palestinian cooking and shares his father’s weekend recipe for easy eggs with za’atar and lemon that he and his siblings enjoyed as kids. “It’s proof, if ever proof were needed, that few things are not improved by the addition of some good-quality olive oil, a squeeze of lemon, and a sprinkle of za’atar,” he concludes.

How else can I use za’atar?

Meanwhile, in downtown Detroit, diners can experience contemporary Lebanese cuisine—and za’atar incarnations—at the award-winning Leila. Opened in November 2019 by father and son restaurateurs Sameer and Samy Eid, Leila is named for the family’s matriarch and is an homage to their culture’s heritage and traditions. Za’atar is featured in many menu items, from traditional fattoush, labneh, and halloumi to a Middle Eastern twist on a chocolate tart with ganache and za’atar caramel. 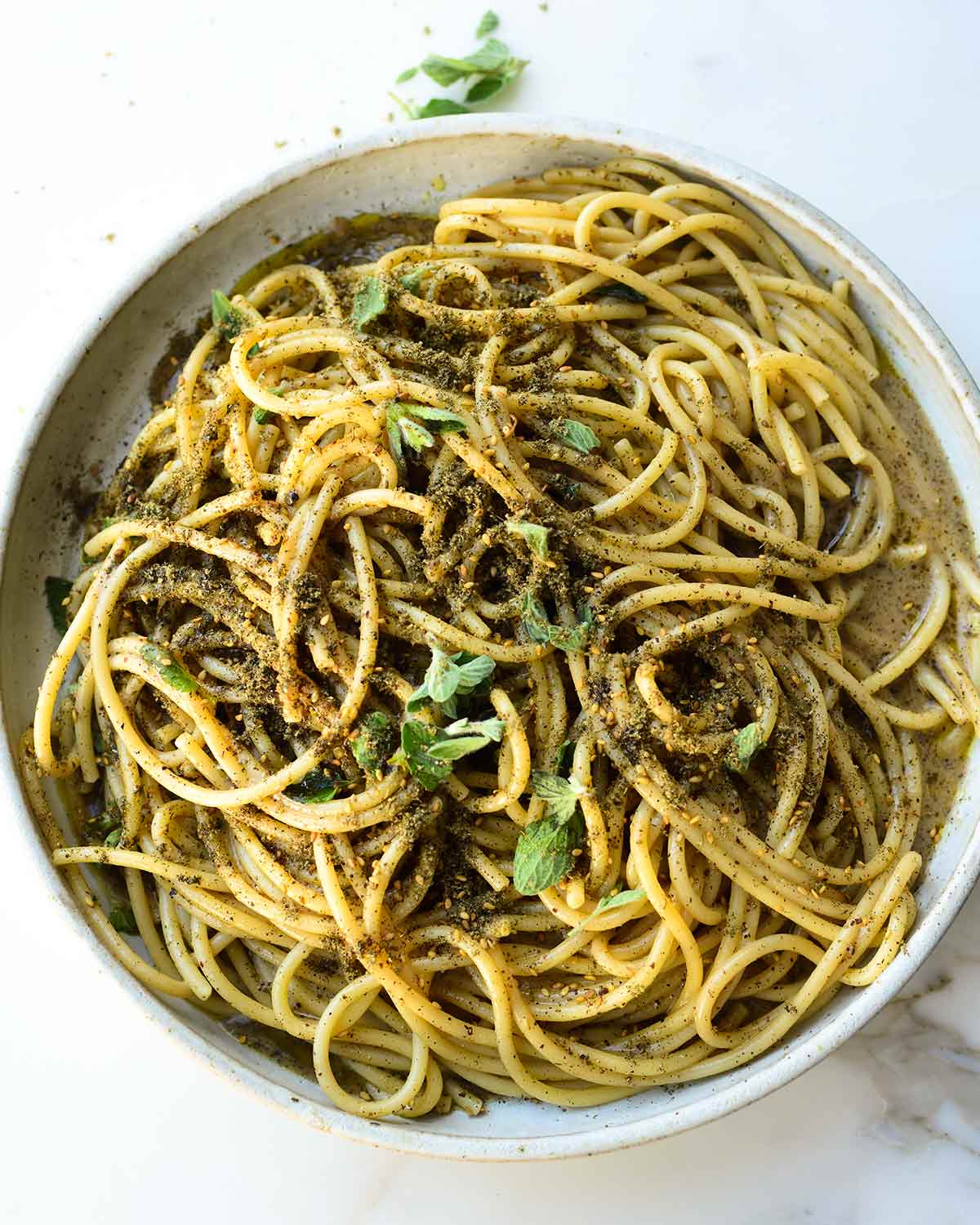 And there’s no reason not to use za’atar in dishes at home that are inspired by other regions. Ottolenghi’s za’atar cacio e pepe ingeniously gives a Middle Eastern flair to the classic Roman dish that’s showing up everywhere with its creamy Parmesan and black pepper melding of ingredients. Or, sprinkle za’atar on green shakshuka, a riff on the North African breakfast-for-dinner classic that’s satisfyingly savory with a lingering za’atar lilt. Or take a taste and see how you’re inspired to use it, whether as a rub for pan-seared chicken that enhances the pan juices or even a revelatory watermelon and halloumi salad.

© 2021 Ellen Niz. All rights reserved. All materials used with permission.

As a kid growing up in the Midwest, Ellen loved frequent dinners out with her parents as well as chowing down on Southern comfort food at her grandparents' homes. Now, she lives in one of the most diverse food capitals of the world, Queens, New York, where everything from Indian dal to Korean kimchee to Colombian arepas is just steps away. Ellen is currently an editor and writer creating content about food, entertaining, home design and decor, parenting, and women's lifestyle. Her work and her articles have appeared on Today.com, KitchenandBathBusiness.com, HouseBeautiful.com, Parents.com, and more.