This asparagus frittata brings out the best of spring flavors. Thinly sliced potatoes, snappy asparagus, and custardy eggs are all dusted with melty cheese and fresh tarragon for an easy weeknight dinner. 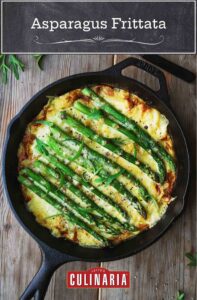 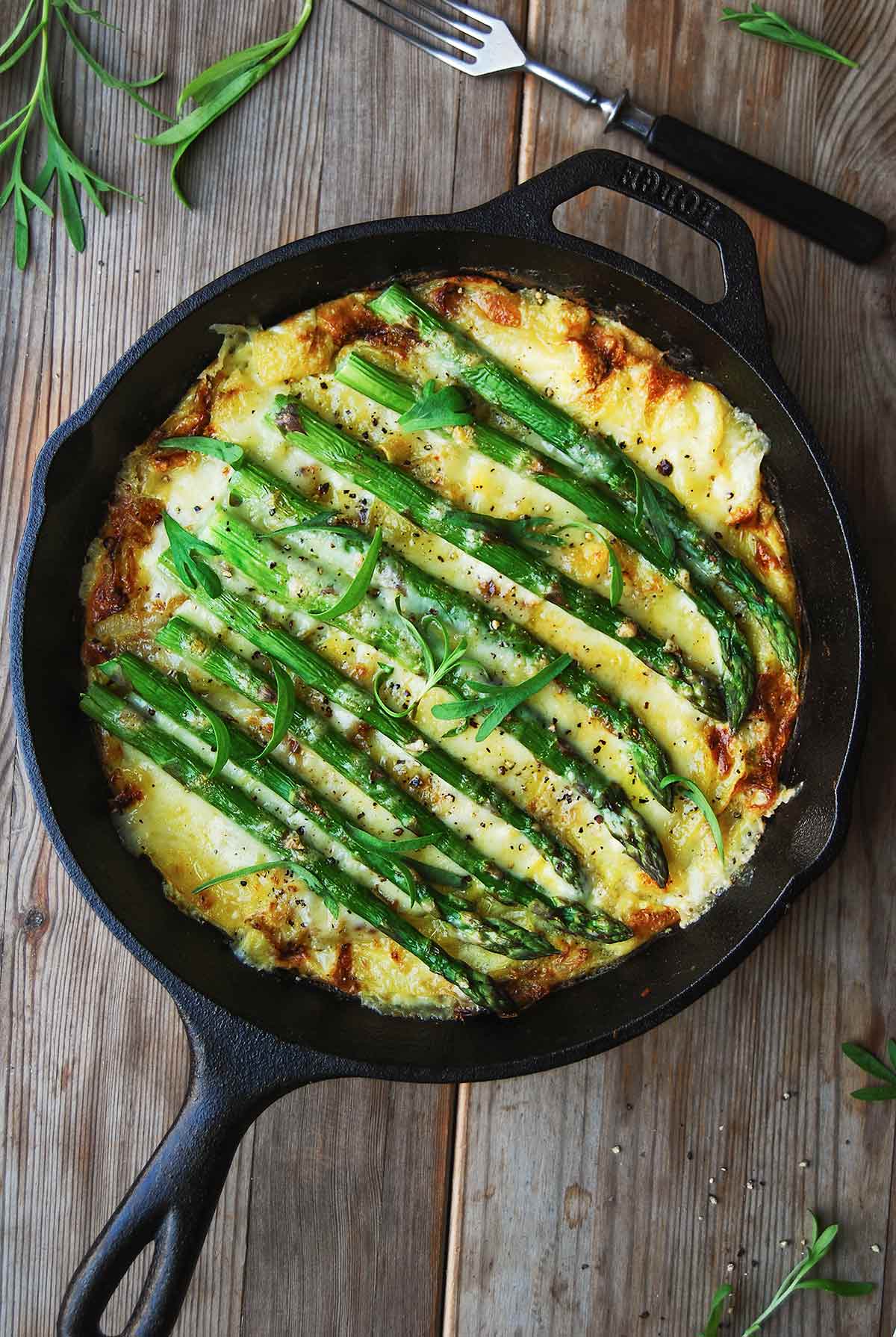 Seeing the first asparagus of the year spread out on the kitchen table is exciting — it feels like the official beginning of spring. There are many recipes to herald the start of the season, including ones that are elegant and complex, as well as time- and labor-intensive. But the week has just begun, so let’s take it easy for now. A frittata, refined with aromatic cheese and tarragon, and crowned with crisp green asparagus, sounds just right. It’s a main dish for two or makes for a nice nibble when you have a few friends over to enjoy a bottle of wine.

How do you flip a frittata?

The hardest part of this recipe might be flipping it, especially if you’re using a heavy cast-iron skillet. If sliding it onto a plate and inverting it back into the skillet seems too stressful, you can try conquering it with a spatula and removing sections at a time before flipping. And actually, you don’t truly need to flip it—you can, instead, slide the whole shebang under the broiler to get the top golden brown so long as you’re using an ovenproof skillet. 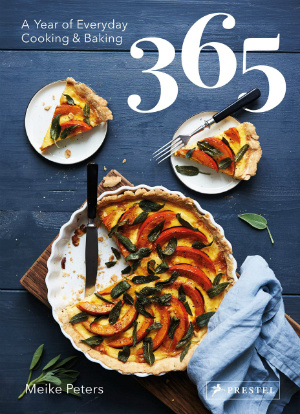 Bring a large pot of salted water to a boil and blanch the asparagus until just al dente, 45 to 90 seconds, depending on the thickness of the stalks. Drain, rinse quickly with cold water, and pat dry.

Spread the potatoes in a single layer between 2 layers of paper towels and pat them dry.

In a heavy, ovenproof 10-inch (25 cm) skillet over medium heat, warm a splash of olive oil (about 1 tablespoon), add the onions, and cook until golden and soft, stirring occasionally, about 5 minutes. Move to a small bowl or plate.

Add another generous splash of olive oil (1 1/2 to 2 tablespoons) to the skillet. Layer the potatoes in the skillet, spreading them in 1 to 2 even layers.

Cover the skillet and cook the potatoes over medium heat until golden, about 12 minutes, reducing the heat if the potatoes brown too quickly. Remove from the heat.

Spread the onions on top of the potatoes, cover, and cook for 2 minutes.

Meanwhile, whisk the eggs with 1 teaspoon salt, nutmeg, and pepper. Pour the eggs over the onions and potatoes, cover the skillet, and cook for 2 minutes.

Arrange the asparagus on top of the eggs, cover, and cook until the egg is just set, 2 to 4 minutes.

Sprinkle with the cheese and slide the uncovered skillet under the broiler, or bake at 500°F (260°C) until the cheese melts, 1 to 3 minutes.

Sprinkle with tarragon, season to taste with salt and pepper, and serve immediately.

Frittatas are a weeknight problem solver. They're quick and easy, filled with anything green and fresh from the garden, and any bits of spare soft cheese. This asparagus frittata totally hits the mark. Savory potatoes, topped with nutmeg dusted eggs, al dente asparagus and a sprinkle of soft cheese. It should feed 4 people, but it's so good, it may only serve 2.

This asparagus frittata was challenging on a number of fronts but in the end, it was worth it because the flavors were awesome. Another dish that didn't last very long, which is always a good sign.

The recipe calls for cooking the potatoes for 12 minutes (or until golden) on medium and that if the potatoes start to brown too quickly, to lower the heat. I lowered the heat anyway because my stove runs hot but I found it awfully difficult to check the bottom of the potatoes. I'm not quite sure what "until golden" means here unless it's the bottom, but again, that was hard to tell.

The rest of the recipe went swimmingly and everyone loved it, so no harm, no foul. The tarragon on top before serving was a genius move, as well.