This classic French toast doesn’t seem at all like it’s putting stale bread to use. In fact, it seems quite like an indulgence when made this way, with eggs and cream and more. Here’s how. 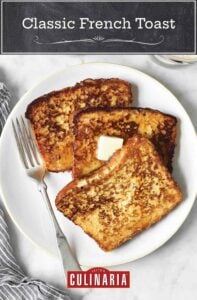 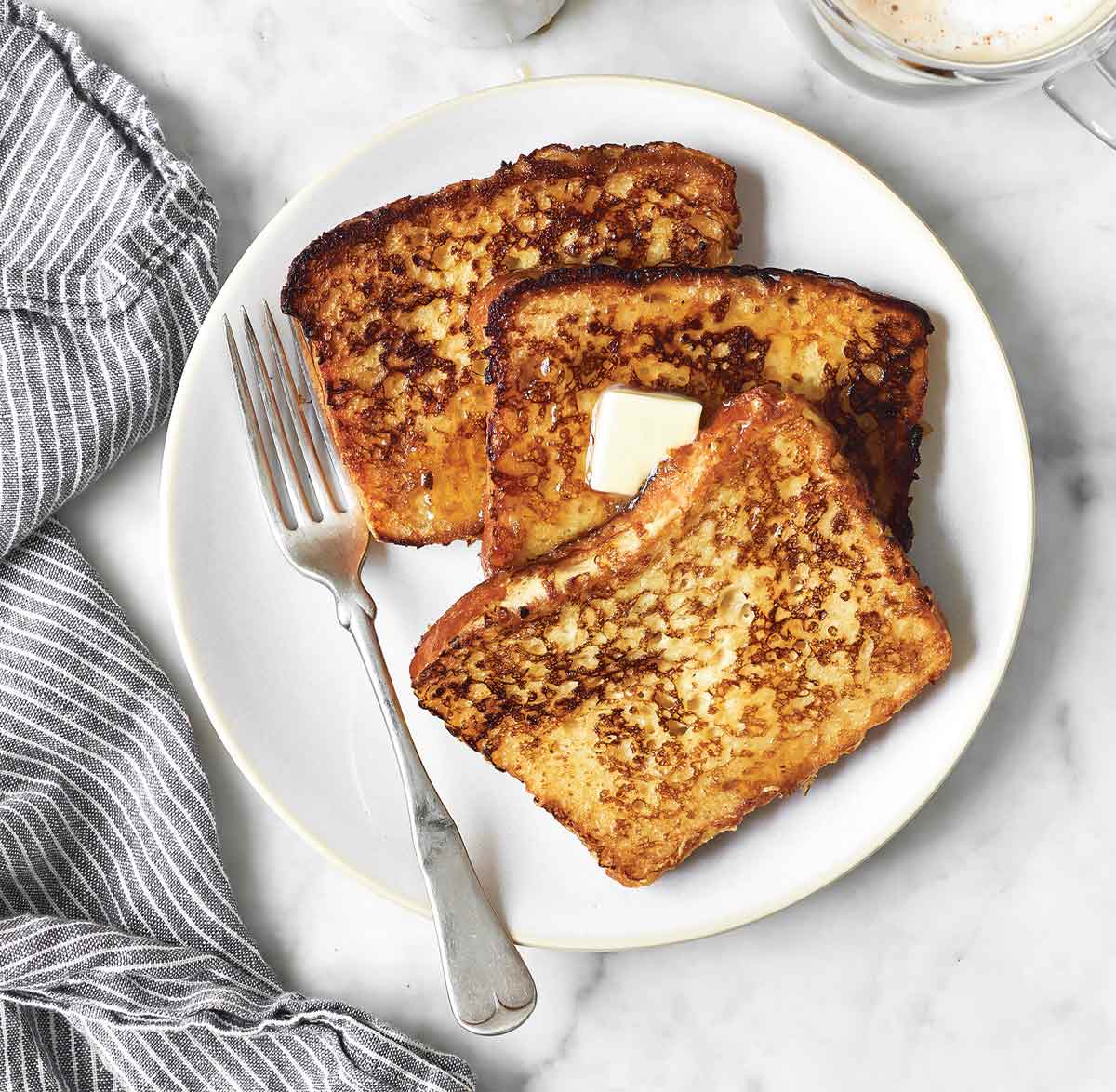 French toast, true to its name, originated in France, where it is called pain perdu (“lost bread”), as it’s made with leftover stale bread. You’ll find some variation on the theme in many culinary cultures; after all, what could be a simpler combination than bread, milk, and eggs?

The difference between this and ordinary French toast is the quality of the ingredients. Start with a high-rising white bread—be sure it’s slightly stale, otherwise it will fall apart in the batter. Slice it thick; we found 5/8-inch (15-mm) just about right. Crispy on the outside, toothsome yet tender within, this is the French toast of which dreams are made.–King Arthur Baking Company

What kind of bread should I use for French toast?

French toast is customarily made with plain white bread, though there are those who swear by day-old challah or whole grain breads and those who think French toast made with cinnamon raisin bread is just about as close to breakfast heaven as you can get.

In a small bowl, whisk together the eggs, cream, salt, nutmeg, rum, and vanilla. Stir until smooth but not foamy, about 1 minute. Pour the mixture into a shallow 8-by-8-inch (20-by-20-cm) casserole dish or roasting pan large enough to hold 2 pieces of bread snugly.

In a heavy skillet over medium heat, warm the butter and oil until the butter melts.

☞ Tester tip: If you have a griddle, you can use that instead of the skillet and make all the French toast in a single batch.

Place 2 pieces of bread in the soaking dish, turn them over, and turn them over again to coat. The entire process should take about 15 seconds; you want the bread to absorb some of the liquid but not to become thoroughly saturated.

Place the bread in the skillet and fry until golden brown, about 3 minutes.

Fry the bread on the second side until golden brown, about 2 minutes. Place the French toast on the baking sheet and place in the preheated oven to keep warm while you cook the rest.

When all the pieces are cooked, serve the French toast on heated plates with extra butter, dusting it with confectioners’ sugar, if you like.

How to make French toast in a waffle iron

If you're looking for a decadent French toast for a special occasion breakfast or brunch, this recipe is the one for you. The exterior is beautifully golden brown with a soft, luscious interior that begs for a light drizzle of real maple syrup and a sprinkle of fresh berries. If you're lucky enough to have any slices leftover, they freeze very well for a quick future breakfast.

This recipe is perfect just as it's written. I suggest using Myer's Dark Rum for richer flavor than provided by a white or gold rum. Texas Toast from our freezer yielded great results. Any shallow dish that holds at least one slice of bread will work—soaking two pieces of bread at the same time (as mentioned in the recipe) speeds up the preparation. We served the rich French toast with warm maple syrup and thick cut bacon.

This is a solid, rich French toast recipe. I was skeptical since it seemed far less simple than my usual go-to French toast, but the addition of the cream and extra egg makes all the difference.

Take note that your bread should be on the drier side to get the best soak without getting soggy. I let my bread sit out on the counter to air dry for the day and night before preparing. These slices absorbed the cream/egg mixture slowly but enough to coat well. I also used some week-old slices right out of the loaf bag (because I had so much cream/egg mixture left over) and those slices absorbed the liquid up too quickly and became soggy. On the griddle it all fried up well, but the dried-out slices were easier to handle and kept a more “puffed” bread texture to them.

Use that rum (or my favorite, bourbon) to enhance the depth of flavors of your French toast. I always think of eggnog while making French toast; a good eggnog plain is nice, but a good eggnog with a little bit of brown liquor stirred in is awesome!

To keep your cream/egg mixture from getting too foamy, try whisking your eggs before you add the other ingredients. Then you can gently stir everything else in, with little effort. If you have a larger skillet or griddle top, you can quickly cook large batches up and keep them warming in the oven until ready to serve.

I served my French toast with skillet fried leftover baked potatoes and beef sausage. When I try this for the next family brunch, I plan to top the French toast with some fresh berries, or if I’m feeling ambitious, a bananas Foster sauce.